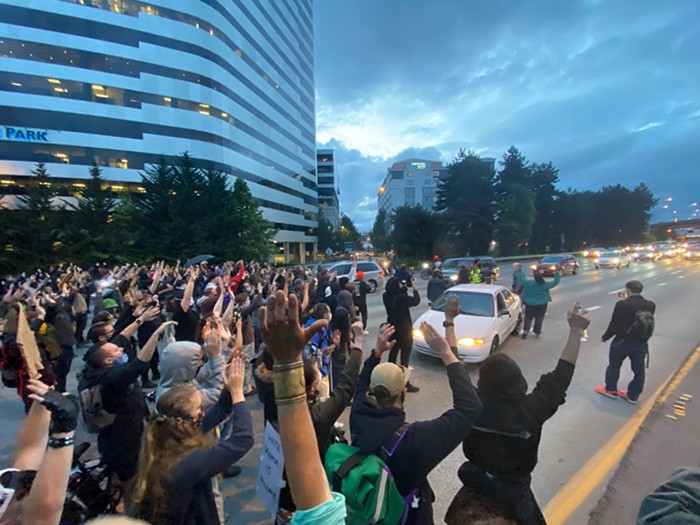 A woman got out of her car and joined demonstrators as they blocked traffic on I-5 for five minutes on Monday evening. Chase Burns
Every night around 7 pm, demonstrators now march from the Capitol Hill Organized Protest to the Seattle Police Department's West Precinct. The downhill rally culminates with a handful of speakers who speak out against police brutality. Tonight, the rally ended with an unexpected detour—onto I-5.

A woman just came out of her car and joined. #seattleprotest pic.twitter.com/aBR5n0ABKr
— Chase Burns (@chaseburnsy) June 16, 2020

The rally began slightly later this evening around 8 pm, with the first two blocks of the march starting in silence.

Speakers spoke on the steps of the West Precinct on Virginia Street for around 30 minutes. There were no police in sight, only a barricade set up in anticipation of the rally.

Demonstrators spoke on a bullhorn about SPD's use of tear gas, calling it a war crime and demanding justice. Organizer David Lewis talked about being "pepper sprayed and gassed for two weeks for this change with you."

"It is your voice, it is your feat, it is your bodies that has earned us an audience with the mayor on a weekly basis," he continued. "A lot of the voices here are demanding for change and we will have it."

Speaker calls the SPD’s use of tear gas a war crime and calls for justice pic.twitter.com/cumPz4G7me
— Chase Burns (@chaseburnsy) June 16, 2020

“For those of you who don’t know, I’m David Lewis, yes, THAT David Lewis,” David Lewis says while addressing the West Precinct rally before it left and entered I-5. #seattleprotest pic.twitter.com/ctcnbUba37
— Chase Burns (@chaseburnsy) June 16, 2020


Just after 9 pm, the rally wrapped up and left the precinct. Before returning to the Capitol Hill Organized Protest area, the rally made an unannounced turn onto I-5 off Yale Ave. Keeping a tight formation, demonstrators held up their hands while yelling, "Hands up, don't shoot." Many drivers honked in support, with one woman exiting her vehicle to join the protest.

A Washington State Patrol officer quickly arrived, telling demonstrators that "this is not safe" and "I don't want anyone to get hurt," but demonstrators left the interstate without injury. Southbound traffic ended up being shut down for around five minutes.

"We're coming back," a speaker told the crowd at the end of the rally, referring to the West Precinct, "and we're bringing more."