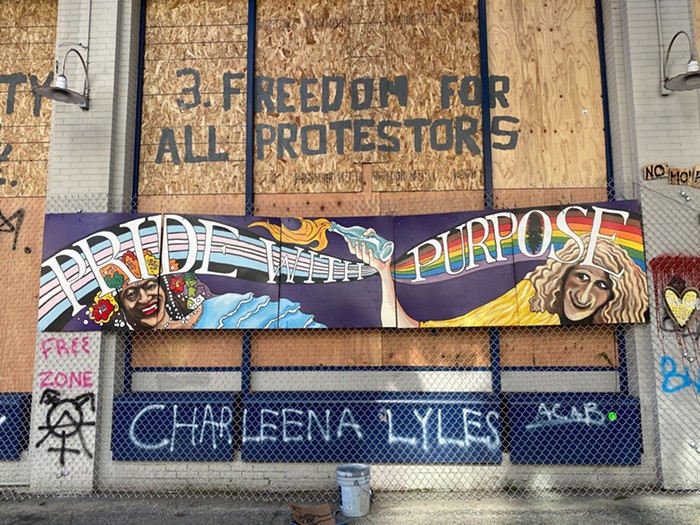 A new Pride mural outside the East Precinct. Chase Burns
Former Atlanta officer Garrett Rolfe faces 11 charges including murder for the shooting and killing of Rayshard Brooks. Rolfe could face the death penalty or life in prison.

Bolton's big book: Former National Security Advisor John Bolton's memoir, The Room Where It Happened: A White House Memoir, goes on sale 6/23. Today, the Washington Post and the Wall Street Journal revealed some of the sauciest allegations in it.

From the Washington Post: "President Trump asked Chinese President Xi Jinping to help him win the 2020 U.S. election, telling Xi during a summit dinner last [June] that increased agricultural purchases by Beijing from American farmers would aid his electoral prospects."

From the Wall Street Journal: "Xi had explained to Trump why he was basically building concentration camps in Xinjiang. According to our interpreter, Trump said that Xi should go ahead with building the camps, which Trump thought was exactly the right thing to do."

The City and some CHOP demonstrators agreed on a new barricade formation: It's not working out.

Protester at the “character check” meeting at #CHOP says a forklift will come and move barricades around. She rejects the new compromise layout, and says the whole territory will be occupied from 10pm til 6am. pic.twitter.com/5ZczV4znTR
— Rich Smith (@richsssmith) June 17, 2020

Division over the dividers: This afternoon a protester stood on one of the newly installed concrete barriers and issued some pronouncements about the Capitol Hill Organize Protest area’s new footprint, which was redrawn in a compromise agreement between the city and some CHOP residents to increase safety and vehicular access. “Yes, the forklift is coming,” she said, indicating that she wanted to move the barriers from their current positions. “Yes, we are absolutely going to be mobilizing around these whether they’re here or not. But from the hours of 10:00 p.m. to 6:00 a.m., this is no longer local access, we occupy all of this shit.” During those hours, she implied that cars would block off 12th, 11th, and Pine as they had before the new orientation was enacted. The crowd cheered, and many held their fists up in agreement.

This was news to CHOP’s safety team: Slate, a member of the sentinels, who keep an eye on the barricades, said they weren’t familiar with this protester’s plan, and as of this afternoon they hadn’t yet established a dialogue with her. Because of the ad hoc nature of the CHOP, it’s hard to establish those communication lines to make barrier decision happen cohesively, they explained.

Who even agreed to this? “There has been a decent amount of misinformation as to how this came to an agreement,” Slate said, referring to the new configuration. “Even I don’t know who had reached the agreement initially with the city to make this happen. From our perspective, it’s very much a day by day thing. So you wake up in the morning and they’re changing this out, and everyone came to their own conclusions.”

From the sentinel’s perspective, the barriers are a good idea: “In the first week when we were still protesting, the community was on our side,” Slate said. “And then, as we had to increase security to prevent further vehicle attacks once the police left, a power vacuum was created, and then we had to turn back around and secure the area. Now the community doesn’t feel included in that, because now they’re not able to get their vehicles in and out and live somewhat normatively. The community here is part of our team, we need them to be on our side in order for us to last long term. This is now not just a protest. [The CHOP] has its own culture, it has its own supply systems, it has its own vibe, it’s starting to grow its own internal security councils and organizational councils to help make this operate better. That requires us to now take steps to organize with the community not just within it.”

There’s been “some division” on this issue: “A lot of people don’t agree with what’s happened as far as the barricades go,” Slate said. “But the barricades makes it so three months from now we can still be at the negotiating table. If we piss the neighborhood off, the city council can say they had to fold from unending pressure from local residents and businesses because they weren’t able to operate normally. If we do that, and we just let them steamroll us politically because we didn’t listen to the community, then that’s on us.”

Also, there's been some other reorganizing in CHOP: The No Cop Co-op is undergoing some leadership... issues... and is currently moving from its weeklong spot on 11th and Pine. The Co-op was originally just one stand, then a few stands, and then moved to become so large that it took up all of 11th as of yesterday. But here's what the corner looks like this afternoon: I can't keep up with CHOP's changes. Chase Burns
The free food stand is currently moving closer to the East Precinct: But there seems to be some internal feuding, so this all might change by tomorrow. 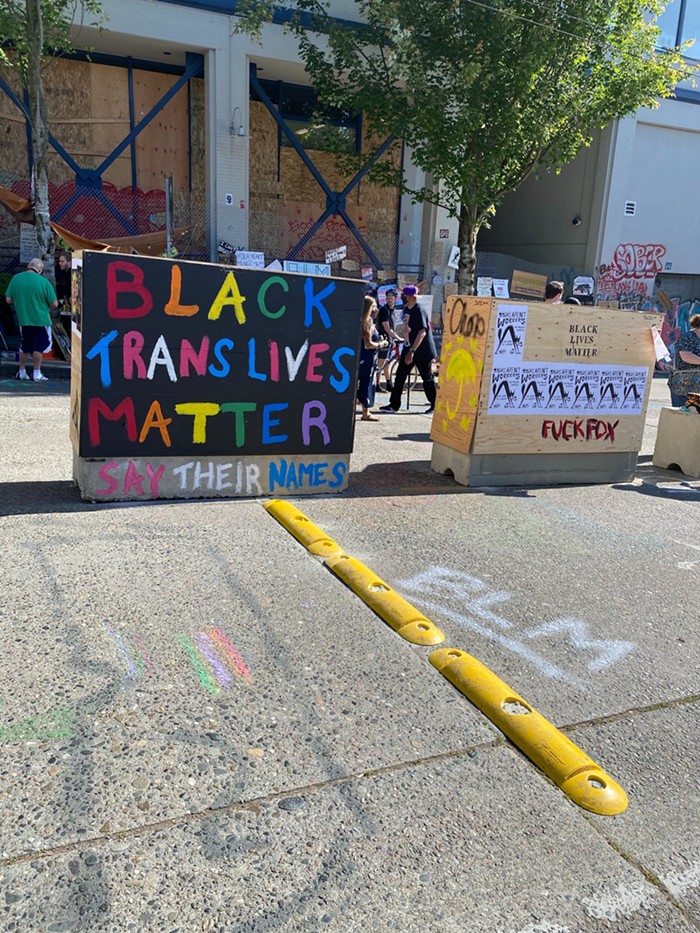 Also, CHOP's got speed bumps now. A new world! Chase Burns
The UK is debating whether or not they should ban the sale of tear gas to the US: Over 160 members of Parliament signed a letter to the British trade secretary asking the country to stop selling tear gas, rubber bullets, and other riot control equipment to police in the US.

Real Change calls for Mayor Durkan to resign: "We support Councilmembers Sawant, Morales and Mosqueda in calling for the Mayor’s resignation," writes their editorial board, "and finding new leadership that can rebuild trust between city government and communities of color."

COVID spikes are happening in some states and not in others: A connection between the spikes? The reopening of bars, restaurants, and other indoor establishments. What's not a connection? It doesn’t look like outdoor protests are causing a COVID-19 spike. "The possible implications are profound," writes Slate. "They suggest that a much wider range of outdoor activities—sports events, beaches, swimming pools, playgrounds, and so forth—could be safely permitted much sooner than currently scheduled. As a result, New York officials are contemplating an expansion and acceleration."

Top Dems are shook by a new AOC-style challenger in New York: Jamaal Bowman is taking on Representative Eliot Engel. Bowman's got a lot of momentum behind him.

I am thrilled to receive @AyannaPressley's endorsement.

Her campaign inspired people in her community who had been ignored for far too long, and now she fights for all of her constituents every day in Congress.

I'm so proud to have earned her support in this primary. #NY16 pic.twitter.com/UMzIUnYuYB
— Jamaal Bowman (@JamaalBowmanNY) June 17, 2020

Furloughs and canceled raises are in store for Washington state workers. Gov. Inslee forecasted today that Washington is facing a roughly $8.8-billion state budget shortfall through 2023 due to COVID-19. That's worse than expected.

is it just me or does this nurse look like Liza Minnelli pic.twitter.com/Cca2pl1C1V
— Chase Burns (@chaseburnsy) June 17, 2020


That '70s Show actor Danny Masterson has been arrested and charged with forcibly raping three women between 2001 and 2003. His bail is set at $3.3 million.

Let's close out the day with... whatever this is.