Raising the Fist at Cal Anderson 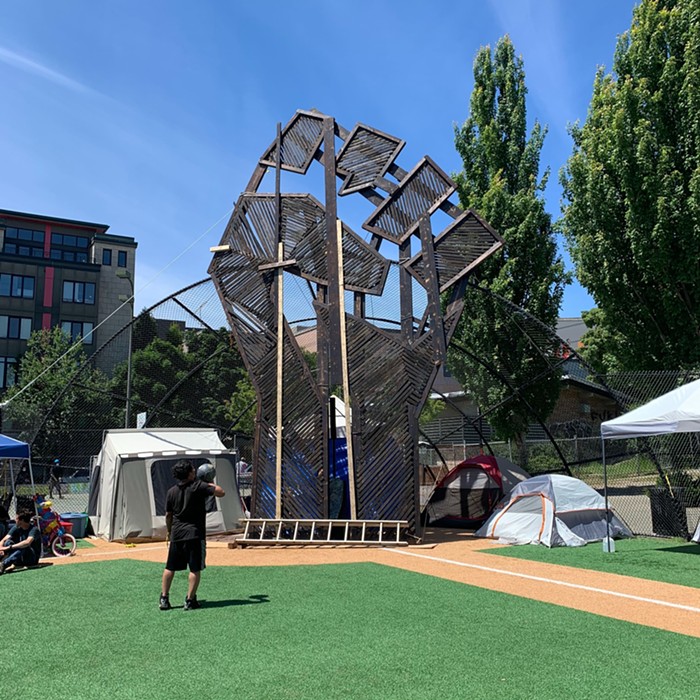 The Black Power fist on the Bobby Morris Playfield yesterday. Jasmyne Keimig
On Wednesday evening, a 30-foot-tall wooden Black Power fist sculpture landed on Bobby Morris Playfied. Old school hip-hop tracks boomed and a crowd of onlookers cheered as workers secured the artwork to its hopefully permanent home within the Capitol Hill Organized Protest. It took a crane, several lengths of rope, and a lot of people power to get it there.

The process started earlier this month when lead planner and carpenter Jon Top watched the protests unfold here on Capitol Hill from his home in Bellingham, eventually coming down to be on the frontlines at 11th and Pine.

Once the tear gas clouds cleared and Free Capitol Hill/CHAZ/CHOP started to form, Top wanted to give back to the nascent community. He settled on a giant fist, telling me that it was a symbol that "resonated" with him from the protests. Relying on his experience building concert stages at festivals, a team slowly formed to create the giant structure.

Ok they set it down pic.twitter.com/0MnftGe7Xv
— jasmyne keimig (@jasmynekeimig) June 17, 2020

Top told me he started with two builders he knew from Bellingham, eventually filling out the core team with enthusiastic people he met within CHOP. Building the structure out in the north side of the park took about three days. He told me it was a collaborative effort, with engineers, riggers, and other set builders stopping by the site to pick apart the project and make sure it could be safely held up on its own.

The plan was originally to lean the fist on the pump house on the south side of the reflection pool in Cal Anderson using only people, rope, and one person on the bullhorn. After about 45 minutes of grunting and dozens of strained arms, the idea was abandoned once it became clear that rigging the sculpture that way would be too dangerous, especially once the sun set.

Top then managed to crowdsource enough money to hire a crane to come back the next day, settling on the batting cage on the playfield. This tactic ultimately proved successful as the fist was easily rigged onto the crane, swinging high against the blue sky as it cleared the playfield fence, touching down right at home plate.

There was a brief hold up as they kicked someone off the cage but they are securing it as we speak pic.twitter.com/t0j5fODpPn
— jasmyne keimig (@jasmynekeimig) June 18, 2020

For now, the Black Power fist isn't going anywhere. It's held down by dozens of ropes that Top says he plans to replace with steel ones sometime next weekend to make triple sure the structure won't go anywhere.

As for Top's future plans for CHOP, he says that he's "done my part here" and is happy to have given a monument to the protest to congregate around. There's a GoFundMe for covering the cost of materials, with the overflow going toward other organizations benefiting Black people and CHOP residents.