One Dead, One in Critical Condition After Shooting at CHOP at 2:20 am 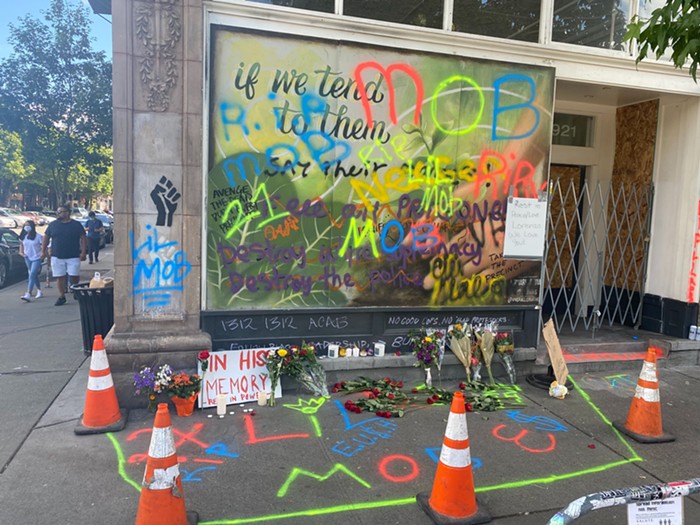 This vigil was created after the shootings. CB

Early Saturday morning citizen journalist Omari Salisbury reported two people shot near or on the borders of the Capitol Hill Protest Area (CHOP), one dead and one wounded. Capitol Hill Seattle and the Seattle Times have followed up on Salisbury's stream.

Later on in the morning Seattle Police Department gave their version of events, saying that the dead man is 19 years old and the other man "remains in the hospital with life-threatening injuries." The suspect or suspects are still at large, and there have been no arrests. There has been no description released of potential suspects. A homicide investigation is underway, and anyone with information is urged to call (206) 233-5000.

Nearly two hours of video posted on Facebook by Omari Salisbury, citizen journalist with Converge Media who has been documenting the protests, shows a tumultuous scene while he describes how one of the victims was receiving CPR by CHOP volunteer medics, who apparently drove the critically injured victims to Harborview Medical Center, about a mile away...

He also described a scene of “pandemonium” at the medic tent when one of the victims was being treated there, as the medics and others argued over whether they should call Medic One or transport the victims themselves. “There was a lot of confusion,” he says on the video.

Here is that video:

In a statement, Seattle City Council Member Kshama Sawant offered her "deepest condolences...to the loved ones of the black protester who was tragically killed this morning." Though we have very little information about the shooters or the victims, she said there "are indications that this may have been a right-wing attack."

It is no accident that right-wing hate and violence has grown dramatically with Donald Trump in the White House. If this killing turns out to be a right-wing attack, President Trump bears direct responsibility, since he has fomented reactionary hatred specifically against the peaceful Capitol Hill occupation, and even threatened to intervene with federal troops. Also responsible are the conservative and corporate media outlets, both locally and nationally, which have themselves whipped up right-wing hate by completely misrepresenting the nature of the peaceful protest occupation, and who are continuing to do so even now, claiming that this shooting proves the CHOP is descending into chaos. Seattle’s establishment Mayor Jenny Durkan and Police Chief Carmen Best also share responsibility for having portrayed our protest movement as violent.

While some protesters have embraced Sawant's support of CHOP, others see her calls to Tax Amazon as distracting from their movement to defund or abolish the police and to free all protesters.

This is the second protest-related shooting in the neighborhood since the uprisings that began in Seattle at the end of May. On June 7 Nikolas Fernandez drove into a crowd of protesters and shot Dan Gregory, who tried to stop the car.

This afternoon, protesters have gathered on Bobby Morris Playfield to discuss plans to move forward following the violence.