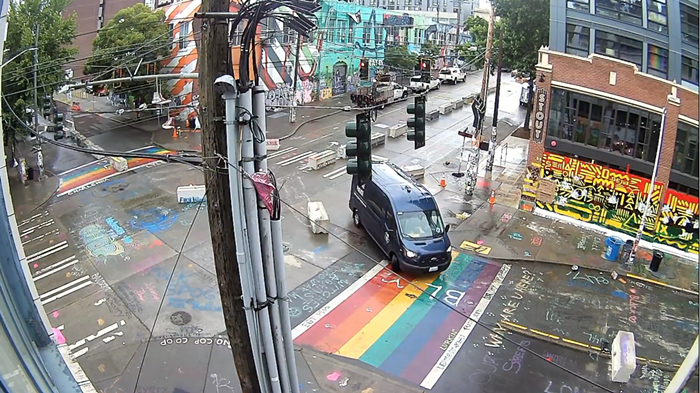 The remains of CHOP at 7:50 a.m. on Wednesday morning. You can watch more on our livestream. Stranger Livestream
It's the end of CHOP: Police started arresting people in the area at around 5:23 a.m. Wednesday morning, the Seattle Times reports. This is a result of an executive order made by Mayor Jenny Durkan at 9:28 p.m. last night. The order was tweeted in the early morning. In it, she declared “gathering in this area an unlawful assembly requiring immediate action from city agencies, including the Police Department.”

SPD tearing down some tents outside their garage entrance at #CHOP behind the police line #seattleprotest pic.twitter.com/GSDJHANNUh
— Lindsey "Member of the Media" Wasson (@lindseywasson) July 1, 2020

Due to ongoing violence and public safety issues in the East Precinct/Cal Anderson Park area. Mayor Jenny Durkan has issued an executive order to vacate the area. Seattle police will be in the area this morning enforcing the Mayor’s order. https://t.co/SpVRYIB8eg pic.twitter.com/JAt2AvUTCr
— Seattle Police Dept. (@SeattlePD) July 1, 2020

SPD won't let The Stranger's Rich Smith into our office: Let him in!

Tacoma is one of 11 cities that will be exploring a universal basic income program: A group of cities whose mayors are in the "Mayors For A Guaranteed Income" group started by Stockton, California's mayor, Michael Tubbs, will test out the program. Tubbs piloted the program in his city back in 2017 and gave residents $500 so no one was in need.

ICYMI there's a guillotine set up outside of Jeff Bezos's D.C. home:

DC protesters have set up a “guillotine” in protest of Jeff Bezos in front of his complex in DC pic.twitter.com/VZ0AWTJqaV
— Drew Hernandez (@livesmattershow) June 28, 2020

A world record for Italy: Italian police seized 14 tons of amphetamines made by the Islamic State in Syria. It was in the form of 84 million Captagon tablets and worth around one billion euros. Police said it was the biggest seizure of the drug in the world.

As of 6:55 a.m.: SPD had cleared all the way to the southern tip of Cal Anderson Park. The National Guard was also assisting with the clearing effort.

This fuckin' guy: Rand Paul criticized Dr. Anthony Fauci to provide "more optimism" on coronavirus. Paul, according to The Hill, is tired of Fauci's "cautious assessments." Back in May, you might recall, Paul also told Fauci to have some humility since he didn't know jack about the economy. Rand, please, stay in your lane.

The show can't go on: The Fourth of July needs to be chill, health officials across the U.S. are warning. Los Angeles, where 10,000 new COVID-19 cases have materialized since Friday, has ordered beaches closed and fireworks shows canceled the New York Times reports. Celebrate the holiday at home, others warn and don't mix households. Make yourself a hot dog and be done with it.

First arrests over Hong Kong security law: The Chinese government's law passed Tuesday night bans "subversion, sedition, terrorism, and collusion" in an attempt to clamp down on anti-government protests. However, broad interpretation of the law could mean anyone who engages in certain types of speech or organizing could be targeted. Today is usually a huge pro-democracy day, a commemoration of when Hong Kong returned to Chinese control. Thousands gathered in the street on Wednesday. Police arrested 300. Nine of the arrests, including the arrest of a 15-year-old girl were related to the new laws.

Indian groom dies after wedding during pandemic: A wedding two weeks ago has set off the biggest infection chain in Bihar, India. The groom from the wedding died but his body was cremated before it could be tested for COVID-19. However, two days before he died, the groom had a fever. Officials also say he had a fever the day of his wedding. One hundred positive cases have been confirmed in recent days. Contract tracing has connected 15 of those cases to the groom's relatives.