Memories of Utopia... Charles Mudede
At around 4:00 p.m. on June 28, here I am walking down the stretch of 13th Avenue between Pike and Pine. My destination is around the corner. My thoughts are completely disconnected from my surroundings. I'm thinking about Hannah Arendt. About how she blamed the rise of totalitarianism in Germany and Soviet Union on the failure of European social democracy to become as global as capitalism. I read Arendt that morning because of the Seattle Democratic Socialists of America demonstration that occurred at Magnuson Park the day before. The event climaxed outside of Mayor Jenny Durkan's home. She was not there. But her gate was defaced.

As I walk down 13th, I'm trying to figure out what in Arendt's idea works and what doesn't. Suddenly, something pulls my thoughts out of the self inside of me and throws them onto the street around me. I stop. Hannah Arendt and social democracy dissolve. The street says: I have been here before, but not here in Seattle. It's another city that I visited either in a dream or in the real world.

It takes a moment or two for me to realize it's Berlin.

I was there in 2014 for two weeks, and I stayed in a hotel in the Mitte, Hotel Motel One. The breakfast was cold boiled eggs and cold cuts and cold tomatoes. But that's not what transports me to the capital of Germany. It's instead all of the graffiti on the walls next to me. There is almost nothing like it in most of Seattle; but many of the streets in Berlin are covered almost completely with graffiti. Before it was cleaned up and gentrified, New York City was once like this. The same goes for London. Berlin, however, never cleaned up, never became respectable. It kept alive what makes a city feel like a city. The democracy of its surfaces. 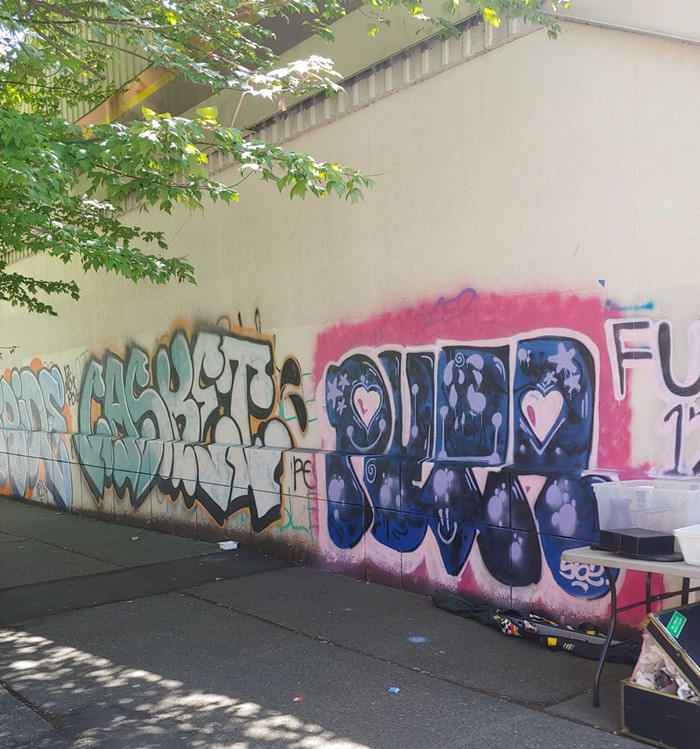 "We be in the city!" Charles Mudede
Why was this street in Seattle so much like walking down a street in Kreuzberg? Because of CHOP/CHAZ.

This section of 13 Avenue, which suddenly sunk me in time (6 years) on June 28, is on the outskirts of an autonomous zone that came into existence the day after the Seattle Police Department abandoned the East Precinct on June 8, 2020. It captured the nation's attention for almost a month. And during this time, it was densely covered with brilliant and bad graffiti—on the sidewalk, the street, the boards, the brick walls, the mailboxes. The street art emanated from this core, between 11th and 12th on Pine, in the way the light from a star diminishes as it spreads further into the night of empty space.

What made Seattle a real city for a moment is now being returned to what makes it not a city. Clean, privatized surfaces and middle-class respect of property. And indeed we can say that this is what really triggered the downfall of CHOP, Durkan's strong middle-class attachment to property, particularly her own.

If one looks at the timeline of events that occurred after her gate was defaced on June 28, they will see Durkan ordering action against the Kshama Sawant, who participated in the DSA demonstration. In fact, her letter demanding that the Seattle City Council investigate the POC socialist is filled with a white-hot outrage that, even for her, is exceptional. Then on the morning of July 1, it's down to business. Durkan, who visited CHAZ/CHOP only two weeks before and had nice things to say about it and Marcus's garden, issues a red-hot executive order to vacate the area. The "weeks of violence," the "shootings," the "deaths of two teenagers"—enough is enough. The police marches into the autonomous zone and removes its park people, tents, and art. In no time, they reclaim their station. Before it's 10 am, CHAZ/CHOP becomes a thing of the past.


And now Trump is claiming to be the inspiration for the CHOP crackdown, which makes sense because, despite all of the lefty things she claims to stand for, she is at root all about property, about its protection, and its sanctity. When we examine her response to the defacement of her gate by a bunch of socialists, we can see it has a connection with that gun-toting couple in St. Louis.


The St. Louis couple responded to what they perceived as a direct threat to their property with a silver pistol and a military-grade assault rifle. Durkan, on the other hand, responded with a department of men and women armed to the teeth. She did the same as the St. Louis couple, but at a scale so grand that even Trump is trying to put his name on it.
The Stranger depends on your continuing support to provide articles like this one. In return, we pledge our ongoing commitment to truthful, progressive journalism and serving our community. So if you’re able, please consider a small recurring contribution. Thank you—you are appreciated!
CONTRIBUTE NOW