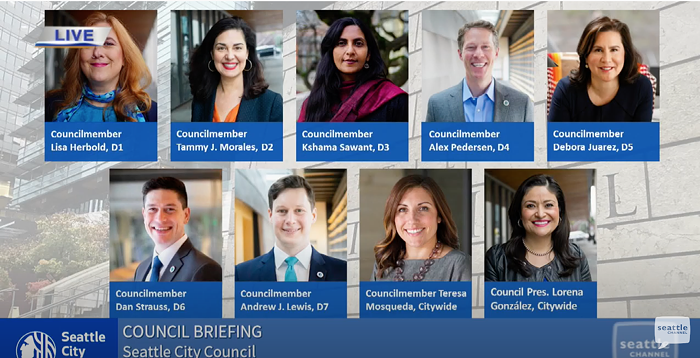 Seattle City Council members spoke about the July 4 incident in a meeting this morning.Seattle City Council screenshot
Early Saturday morning, a speeding car hit two protesters on Interstate 5. There was a Washington State Patrol barricade blocking off the freeway, but somehow that did not stop the driver of the car. Crowds of protesters had made their way onto the freeway for 19 consecutive nights without any problem from cars.

One of the protesters hit, Summer Taylor, 24, succumbed to their injuries and died over the weekend. The other victim, Diaz Love, 32, is in serious but stable condition.

Today, the Seattle City Council mourned the loss of Taylor and discussed the fight Love is now facing.

"It is another Monday and we have more to mourn this week," said council member Lisa Herbold, referring to the shooting deaths in Seattle over the past weeks, "specifically the death and injury on I-5 of Summer Taylor and Diaz Love. The mayor has said not that no one should risk their lives for this movement... but I refer to specifically the people who put their own lives at risk as people have done for generations for the civil rights movement."

No one should risk their life for demanding better from our city, state and country.
Washington State Patrol is leading the investigation and they have assured us they are quickly and thoroughly investigating the incident. I have offered any city resources needed.
— Mayor Jenny Durkan (@MayorJenny) July 4, 2020

Council member Tammy Morales gave the strongest comment. She started by talking about a constituent's daughter who was arrested this past weekend and charged with two felonies for, as far as Morales could tell from video evidence, "simply yelling." Luckily, that person was released, Morales said. Summer Taylor, who was protesting right before being killed, wasn't so lucky.

"We’ve been in a state of chaos for over a month," Morales said. "I feel in large part because the mayor is sending conflicting messages and really does not seem to be in control of her police department."

Morales cited the disjointed incidences: "There are conflicting messages saying that people can stay at the Capitol Hill Organized Protest (CHOP) and then sending police in to clear it at five o'clock in the morning; authorizing tear gas when Judge Jones has ordered that the Seattle Police Department halt violent tactics; sending in police in to clear out the CHOP knowing people would be arrested and then promising not to press charges when people are already in the criminal legal system and leaving it to our city attorney to try to deal with processing them quickly and dismissing them when he can; the police protecting Proud Boys who open-carry but teargassing people who have an umbrella or a candle in their hand; allowing police to require neighbors to show their ID or risk arrest..."

Morales added: "I’m really questioning what is happening in our city right now. Our neighbors are suffering, some are dying, and the mayor allows the police department to act with impunity as if we’re in a police state."

Each council member gave their own comments regarding the weekend's horrific events, and said they were sending their thoughts to Taylor and Diaz's families. Others condemned the actions of the mayor and the police.

Kshama Sawant said this was an example of how the "political establishment has completely failed those fighting for change."

Dan Strauss weakly said that such actions—someone getting killed—were against the city's "moral compass."

Morales ended her comments by referring back to the demands protesters had asked for: Defund the police by 50 percent, reinvest money back into Black communities, and release all protesters.

"The council is working on the first two," Morales assured. The last part is a bit trickier. While those protesters charged with misdemeanors have been released, the felony charges fall under the King County prosecutor, where the Seattle City Council has no jurisdiction. Morales said she has sent letters to the prosecutor and will be meeting with him again.

The pressure of the movement on pushing for these demands, pushing what they want the council to prioritize, is helping, council president Lorena Gonzalez said.

"I know sometimes it feels like the wheels of justice are barely turning," Lorena González said. "We are moving as quickly as we can on the things we can move on now."