What Dawit Kelete's Case Tells Us About American Culture 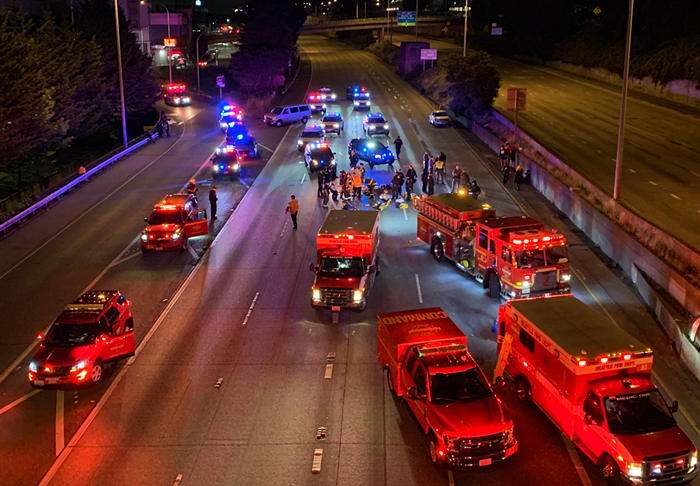 First responders on I-5 at approximately 1:45 am on July 4, 2020, after a driver plowed into two Black Femme March protesters, killing one and seriously injuring another. PHOTO BY LARRY SUBRAMANIAN
On Wednesday, the King County Prosecuting Attorney’s Office charged Dawit Kelete with vehicular homicide, vehicular assault, and reckless driving in a horrific crash that occurred on I-5 in the early hours of July 4. It killed a Black Lives Matter protester, Summer Taylor, and seriously injured another, Diaz Love.

On Monday a judge set Kelete's bail at $1.2 million. That day Attorney John Henry Browne, who is famous for representing the serial killer Ted Bundy in the 1970s and '80s, told the Associated Press that "Kelete is originally from Eritrea and is a U.S. citizen" and "lives with his family in Seattle." It's important to note, however, that the famous lawyer is not representing the defendant at this time. He is, according Seattle Times, hoping to be hired by Kelete's family. It is in the nature of a famous Lawyer to be drawn to a famous case.

The charging documents provide some information about the defendant. They mention "a criminal history that includes a minor intoxicated in a public place (3/3/2012) and a peace and order violation (8/29/2015). Both of these occurred in Pullman, WA when he was 19 years old and 22 years old respectfully." These incidents apparently happened when Kelete attended Washington State University. Kelete was also involved in two collisions with "no injuries." Furthermore, he "lives with his parents" and "works as a cashier at an Arco," and he "denied having any known mental health issues or being concerned about mental health issues," though he did say he "was struggling with an addiction to Percocet and 'had never received treatment.'"

Because Kelete’s family has so far "declined to comment on the case," this is all the public knows in hard terms about the defendant.

But the public, however, does have many opinions about Kelete, his motives, and the crash. An examination of three such opinions will tell us little about the case and defendant but a lot about our culture.

Today the King County Prosecuting Attorney’s Office filed charges against Dawit Kelete for the crash that killed one person and seriously injured another the morning of July 4 on southbound Interstate 5 in Seattle. Full statement below: pic.twitter.com/V3sQk9eYsp
— King Co Prosecutor (@KCProsecutor) July 8, 2020

There is one group that believes the crash was nothing but an accident. For sure, says this group, Dawit Kelete can be blamed for negligence and bad driving, and he deserves to face the full judgement of the law, but he did not intend to cause the protesters harm. He simply drove the wrong way up the exit ramp, hit two pedestrians at a normal speed (meaning, he did not accelerate), eventually stopped his car, and the police report that he expressed concern about the pedestrians he struck with his white Jaguar ("are they okay?").

An example of this position, "It Was an Accident," can be found in a post by a person with the Reddit handle "byu/syd999":

Looking through the videos, police comments, public information, I am surprised people think hate was a motivating factor. We are rightfully angry but let’s not make bad decisions because of that. I think there were poor decisions made by Dawit and he needs to face consequences, but people are pattern matching to past hate incidents in an erroneous way. Here are reasons I think it was driver incompetence/mistakes/aggressive driving as opposed to deliberate targeting of protesters due to hate

The point of this position is that the public and press are sensationalizing (political motivation, murderous intent, hate crime) something is that is ordinary (a bad car accident).

Another group doesn't even care about the driver or his motivations or his mental condition at the moment of a crash that threw two humans high above the white Jaguar. What upsets this group is only the protesters. What the hell were they doing on the highway in the first place? And in the middle of the night? Common sense should have told them that the highway is for cars, not for people. The liberal members of this chattering class do support the Black Live Matter movement, but they also believe there is a proper place and time for protests. I-5 is the wrong place. 2:00 a.m. is the wrong time.

He intentionally drove down a freeway not expecting to find people playing on the freeway. Didn't your Mommy ever tell you not to play on the freeway?
— Deplorable Han Fastolfe 🙃🙃🙃 Parler:@HanFastolfe (@R_Daneel_0livaw) July 9, 2020


The supernatural power of this position has its locus in the American church of the automobile. The sanctified right of this machine, which has dominated transportation for a century, is to keep on moving. And pedestrians who dare to step in the way of this right (perpetual motion) deserve what they get.

The third and final position of this post is, admittedly, obscure to mainstream America. This is the position of a number of immigrants with a conservative structure of feeling. This group believes that the defendant, an East African by birth, deliberately hit the protesters because he was infuriated by what many immigrants of the conservative cast perceive as "lazy Americans." We immigrants, says this group, get the jobs done. We do all of the hard work, while these Americans live on government aid and have all of this free time to protest whenever they feel like it. Upon the revelation of the crash's driver—his color (black); his name (African-sounding)—this kind of talk certainly circulated in immigrant circles and chat groups. He was tired of seeing these lazy Americans. He got angry. He decided to teach them a lesson. And he did. Horrifically. With a car bought with hard-earned American cash.

This structure of feeling leads, of course, to a dead end. In fact, poor people in the US are actually overworked. The mainstream right uses the lazy American myth to justify social cuts. Conservative immigrants use it to cover the pain and wounds of living in a system that ceaselessly exploits the working class.

You Can Now Buy Chick-Fil-A Sauce at QFC