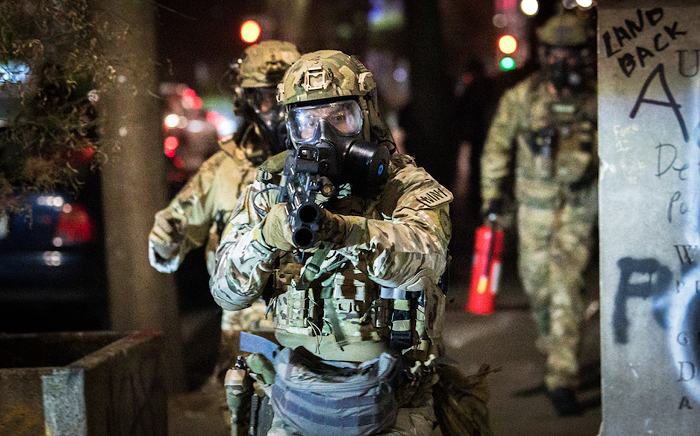 Solan twice characterized federal arrests in Portland as a "success," and three times said some version of "perhaps it's the time we bring in the federal government" to reinforce police here in Seattle. Solan juxtaposed his qualified argument for federal intervention with alarmist descriptions of protesters as "domestic terrorists" and "committed criminals who are bent on doing property destruction, hurting people, and possibly killing people" while perpetuating an "insanity that's plaguing our entire city." He also called for "somebody" to "take charge."

The federal response Solan praised has included anonymous police officers in military fatigues snatching protesters off the streets in unmarked vehicles; daily deployments of tear gas, blast balls, and "less-lethal" munitions that in one case left a protester with a fractured skull; baton beatings and bullrushes; and attacks on the press, including one report of a federal officer punching a New York Times journalist in the head.

This is the sort of firepower Solan wants to rain down on some protesters who on Sunday smashed the windows of two courts, three police stations, a couple Starbucks cafes and AmazonGo stores, and a Walgreens.

The arrests Solan heralded as "effective" and a "success" have drawn a lawsuit from Oregon's Attorney General, who alleges federal police "violated Oregonians’ civil rights by seizing and detaining them without probable cause during protests against police brutality." Another lawsuit filed today by the "Western States Center, the First Unitarian Church of Portland, two state representatives and an ACLU legal observer... alleges the federal government has violated protesters’ 10th Amendment rights," according to OPB.

The President's violent escalation here obviously serves as an attempt to distract public attention from his administration's inept and inhumane response to a resurgent pandemic that has killed over 140,000 Americans, and, far from "effectively" quelling protests, it has only increased the numbers in the streets, with well over a thousand people showing up in front of Portland's federal courthouse last night.

Mayor Jenny Durkan does not seem to share Trump's/Solan's solution to the unrest in the city. Durkan—along with the mayors of Atlanta, Chicago, Kansas City, Portland, and Washington, DC— requested Trump "immediately halt plans to send federal forces from major American cities and withdraw any forces currently in cities."

Seattle City Council President Lorena González and Councilmember Lisa Herbold, who chairs the Public Safety committee, also do not share Solan's views. They echoed Durkan's sentiments in an email sent to Solan following his interview on Monday, saying the unilateral deployment of "paramilitary-type forces" in Seattle would be "unjustified." They also expressed their "sincere hope" that he had "neither met with federal law enforcement, nor collaborated with federal law enforcement, regarding recent protests in Seattle," and reminded him that he's "not authorized to invite the presence of these forces to Seattle, nor to collaborate with them."

Though Solan believes a "reasonable majority" supports SPD's response to protesters, a Crosscut/Elway poll released today found that 51% of Seattleites support "protests that have followed George Floyd's killing." Moreover, 57% of the city holds an "only fair" or "poor" opinion of the department, with 76% believing local police favor whites, and 62% believing that police are more likely to use deadly force on people of color. And 51% of the city supports “dismantling the police force and starting over with a new model of what police are supposed to do in the community."

Solan's remarks came the day the South Seattle Emerald reported that six SPD officers, including Solan, apparently violated the law by registering to vote with their respective precinct addresses.