Another Monday, Another Round of Condemnations from City Council

Council president Lorena Gonzalez's internet bandwidth is low and so is her bandwidth for misogynistic bullshit, like the spray paint found at a city council member's home. But mostly today the council criticized SPD. Screenshot of the Seattle Channel
Each Monday in the Seattle City Council's Zoom chambers lately feels like that movie Palm Springs. If you haven't seen it, it's like Groundhog Day except the twist is that Andy Samberg has accidentally gotten other people trapped in the loop with him.

In this Seattle version of the time-stuck shtick, there’s no way out, not even through death or a moral-code readjustment.

Each Monday, there's a new laundry list of horrors they must weigh in on, usually from a weekend of protests. Then by the end of the week something (like an eleventh-hour Department of Justice request specifically targeted at the council's law restricting the Seattle Police Department's use of "less lethal" crowd control weapons) happens and chaos undoes all the progress the council made. The loop starts over each Monday.

Today's condemnations centered around the protests from the weekend. Council members criticized SPD's use of pepper spray during a global pandemic (and against a temporary restraining order that is still in effect and not targeted by the DOJ's recommendation), property damage at the hands of some protesters, a city lawsuit subpoenaing images and footage from the press of June protests, and vandalizing and threatening council members at their homes.

On the protests:
The council passed a law back in June banning SPD from using or owning tear gas, pepper spray, blast balls, flash bangs, and rubber bullets. That law was meant to go into effect this weekend. A last-minute Department of Justice recommendation on Friday night resulted in a temporary restraining order against the council's law. SPD used a bunch of blast balls, flashbangs, and pepper spray this weekend. Council members weren't pleased.

I will say it was really disturbing to see our police department again using crowd control weapons in ways that were blatantly indiscriminate. In the video footage I saw it’s clear that reporters are being targeted, legal observers are being targeted, blast balls are being thrown overhand into crowds instead of being bowled the way they are directed to do, nurses being sprayed directly in the face in close proximity, police dropping flash bangs and concussion grenades onto protesters from roofs, and rubber bullets.

This council has been pretty clear in our interest in seeing the end of these kind of tools and weapons used against our community it doesn’t build trust to play semantic games and promise community you won’t use tear gas knowing full well officers will be geared up with pepper spray. I believe this is a cynical attempt to evade responsibility for the actions we are asking to end and the responsibility to keep our community safe and frankly, the community sees through those word games.

Those protesting since the very beginning have expressed concern about the continued use of gas and projectiles from our police departments on protesters. I’ve expressed these concerns in the [context] of the global deadly pandemic that we face. Public health has said that using gas tear gas or CS gas is bad for the lungs. It is an irritant to the lungs at a time when illness is impacting the lungs and increasing the chance of illness or death.

I am very concerned about the reports we heard over the weekend. I am extremely frustrated at the court’s ruling. I think it is really unfortunate at best that Trump’s Department of Justice ultimately had the same goal that Mayor Durkan had to be allowed to continue to use gas during a global pandemic.

I am disappointed to see our city’s response over this weekend. When legal observers and independent journalists are not having their rights protected how can we ensure that our residents and citizen’s rights are being observed? We have a choice in how we respond and we continue to choose the most aggressive response possible. If our reform efforts over the last decade have been successful, then why does our response look like every other city’s in the nation? Indiscriminate use of force has no place in our city. We cannot rationalize this behavior away.

As a public official, I have a responsibility to be most focused on the actions of public agencies. In this instance it is the Seattle Police Department. As a reminder, the June 12 temporary restraining order includes tear gas, OC spray, and any projectile including flash bangs, and blast balls. The temporary restraining order specifically says they should not be deployed indiscriminately in the crowd and should be targeted at specific threat of imminent harm and destruction of property.

It does not seem like the use of these munitions was done in a way was consistent with our expectations as a city nor with the specific temporary restraining order.

Kshama Sawant: Reiterated the point she made in a tweet on Saturday morning saying that the DOJ's ruling would "suppress" protests. "That was unfortunately exactly what happened," Sawant said. "Trump’s DOJ, Mayor Durkan, and SPD, are in total agreement under suppression of protests."

On property damage:
At Saturday's protest, several buildings incurred property damage, and a fire was set at the construction site for the new youth correctional facility.

Mosqueda: "I do not support setting fires, breaking windows, or property damage. However, that is not an excuse for indiscriminately using gas on crowds."

Herbold: "I regret the unnecessary property damage. It is not just an abstract, property damage not only impacts those who own property but people who work in those businesses. I will continue to speak out against property damage and call for peaceful protests."

On freedom of the press:
Last week, a King County Superior Court judge ruled that six news outlets would have to comply with an SPD subpoena and turn over unpublished photos and videos from protests on May 30. This would mean that the press would be working in concernt with SPD as opposed to being an objective observer. This challenges the notion of the freedom of the press.

I think it’s abhorrent that our city continues to push for members of the press to hand over video and photos of people participating in their first amendment rights. It’s not going to protect the health and safety of journalists if this push from SPD continues. I’m going to ask the city attorney and the city as a whole to draw back from this ruling for the press to share their videos and photos. It is incredibly important that members of the press have the protection to say they are not actors of the government and they’re not there on behalf of the police. We’re going to put at risk the lives of journalists. It is not appropriate. It is a violation of the rights of journalists.

Alex Pedersen (referring to Mosqueda's comments): "I support your call to protect the integrity of the journalists."

Herbold: "I, too, feel the city’s legal position puts the media at great risk and puts an undo chilling effect on the press."

The independence of the press is sacrosanct. Trust between the press and the citizenry is critical to ensuring that the First Amendment rights of everyone are upheld. I do not think it is the role of government to compel the press to appear as witnesses against their fellow citizens. To the city attorney, who has the power to drop this case: Pete Holmes, drop this case. This case is a threat to the foundation of a free press."

On house visits to council members:
Last night, Morales said, protesters visited her house. "It was my turn," Morales said of the protesters who "came late" and "stayed later." They've been making the rounds to several representatives' homes. But, Morales said she engaged in a discussion with them and "appreciated the opportunity to listen to what they had to say."

"That hasn’t been the experience for everyone," Morales said.

Recently, reports have circulated of vandalism from demonstrations outside the houses of Mayor Jenny Durkan, Councilmembers Pedersen, and Debora Juarez. Pedersen and Juarez have not committed to defunding SPD's budget by 50 percent as other council members have. 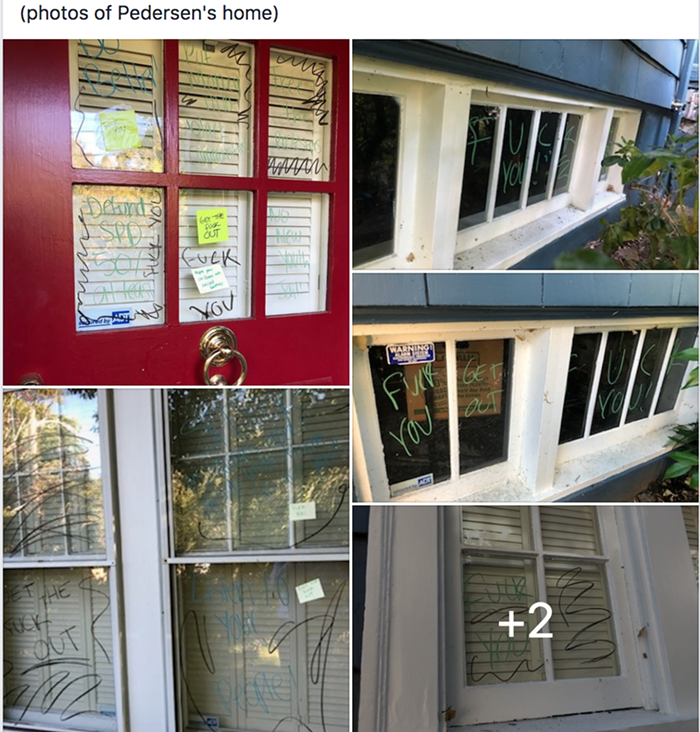 According to a local Facebook group, this is the vandalism at Pedersen's house. District 4 Facebook Group screenshot
Last week, Gonzalez issued a statement against "doxxing" council members and supporting people's rights to "feel safe in their own homes." According to Gonzalez, protesters spray painted misogynistic attacks outside Juarez's home.

"The language being used by some of these protesters is misogynistic," Gonzalez said. "It is sexist at its core. It is the word 'whore' and 'bitch.' For those people who have been completely flabbergasted and on the side of Alexandria Ocasio-Cortez after she was subjected to the phrase 'fucking bitch,' I think you need to reevaluate whether its appropriate to use that language locally against one of your councilmembers."

Lewis, Mosqueda, and Sawant all spoke out against this vandalism as well.

"I disagree with calling any council member a whore or using that kind of terminology," Sawant said. "In the over six years I’ve been in office I’ve experienced countless such attacks, I’ve truly lost track of such attacks."

Sawant shared some of the things she has been called over the years like "a fucking terrorist" and a "worthless cunt." Sawant clarified that she and her movement have not organized any of these trips to councilmember homes despite how her critics may "ascribe supernatural powers to me and my office."

Gonzalez lamented that "it is not new" to be subjected to misogyny, racism, sexism, and xenophobia. "That unfortunately comes with the territory," Gonzalez said.

The condemnations today have been made. But I don't think it's enough to free the council from the endless loop of action and reaction they're performing on this digital stage.