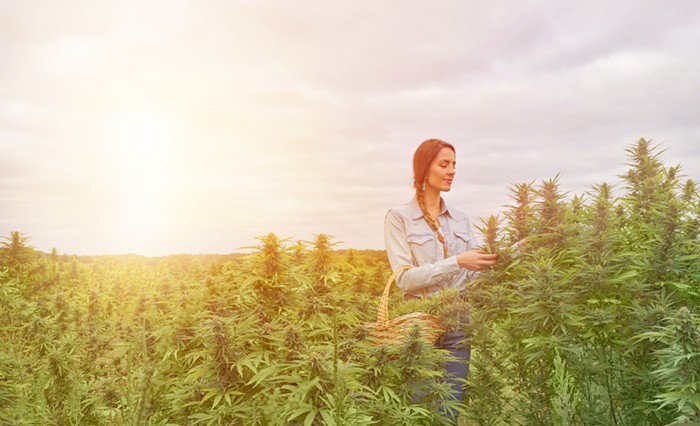 Reflecting fondly on her OSHA training. GeorgePeters / Getty Images
The University of Washington has led a special initiative to investigate workplace risks associated with the cannabis industry, and they’ve found a particularly chaotic landscape when it comes to worker protections. Because the federal government still hasn’t legalized pot, there’s no national guidance on protecting the safety of employees, leading to a patchwork of protections from state to state and a rise in occupational hazards like falls and asthma.

“The reality is workers are working in this industry, whether the federal government agrees with it or not,” says Christopher Simpson, professor in the UW Department of Environmental & Occupational Health Sciences. “Federal agencies really have a responsibility to protect these workers.”

Around 250,000 people are estimated to work in the industry, and researchers found dangers associated with “particulate matter, pesticides, volatile organic compounds, mold, dust and secondhand smoke,” as well as ergonomic injuries. That’s certainly not unique to this particular industry — many of the hazards are similar to those of other manufacturing and agricultural jobs — but there simply hasn’t been much research into whether there are unique risks posed by working with pot.

In particular, researchers found, “workers described health concerns that were a result of social, economic, and political forces facing the transitioning cannabis industry and resulting from an inconsistency between state and federal law.”

The series of articles also noted that people working security at concerts were also at risk of exposure to second-hand smoke, potentially interfering with their ability to work or to pass drug screening tests. A survey of pesticides found high levels of residue, particularly in medically-produced product, including banned substances listed as highly or extremely hazardous. There are also issues around safety training: Though workers felt that the training was adequate, researchers found a statistically non-significant increase in knowledge.

“States that have legalized cannabis are making a lot of money through tax revenue,” Simpson noted. “State regulators did their best in setting up health and safety rules, given they had very little to base them on. But now we are starting to see where the gaps are.”