Visual Art • How to Look

How to Look at Andy Warhol's "The Last Supper" 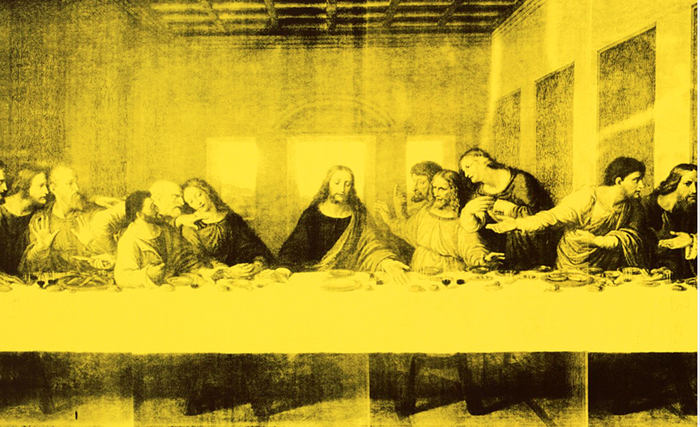 A close up of Andy Warhol's "The Last Supper" (1986), coming to a private collector's home near you. The Andy Warhol Foundation for the Visual Arts, Inc. Image courtesy the Baltimore Museum of Art.
There are thousands of ways to look at things. This is just how I do it. Twice a week, we'll look at art that comes from Seattle, the world, and the past.

One of the last projects Andy Warhol worked on before his death in 1987 was "The Last Supper" series, a suite of over 100 works riffing off Leonardo da Vinci's famous 15th century mural of the same name. Dealer Alexander Iolas commissioned Warhol's show and held its opening just across the street from the Church of Santa Maria delle Grazie, where da Vinci's flaky work is painted right on the walls. It was a cheeky move, one Warhol probably had a good laugh about.

While some argue this (less celebrated) final series reflects Warhol's Catholic faith, I doubt it's that deep. When asked if this particular image held any significance for him, he gave a Warholian reply, "No. It's a good picture." Warhol being Warhol, he also didn't take the image directly from the da Vinci original. Instead, he used shitty commercial reproductions as inspiration. You can tell if you compare the two.

One piece of work from the series features commercial logos over the dinner scene; another shows Jesus's face printed 112 times on canvas. The piece in Baltimore Museum of Art’s (BMA's) collection—pictured above—features two duplicates of da Vinci’s "The Last Supper" positioned side-by-side across a 25-and-a-half foot long canvas. It's washed in piss yellow.

The painting in full. The Andy Warhol Foundation for the Visual Arts, Inc. Image courtesy the Baltimore Museum of Art.
The 34-year-old work is one of three paintings at the center of a controversial major sale by BMA for $65 million (the other two are by Clyde Still and Brice Marden). The museum says the money generated from the deaccessioning will go toward staff raises, a "diversity and equity fund," and its acquisitions budget. The news has generated a lot of anger. Donors wrote a letter calling for a stop to the sale.

As I've written before, the Association of Art Museum Directors has relaxed guidelines around deaccessioning in light of the pandemic, allowing institutions to hawk their precious pieces on auction blocks. The BMA has argued that while they are not in dire financial straits, they are using the sale to "address systemic racism and injustice" in the museum field.

It's necessary to have greater BIPOC representation in museums, but BMA's move seems more like an easy cash grab than a genuine questioning of a collection's makeup. It's upsetting that the museum opted to sell rather than rally their board for needed funds. I fear museums across the country will replicate the concerning move.

That said, when I think about how unsanctimonious Warhol was about this series, I bet he’d laugh at the idea of a museum selling a rip of an Old Master for millions.