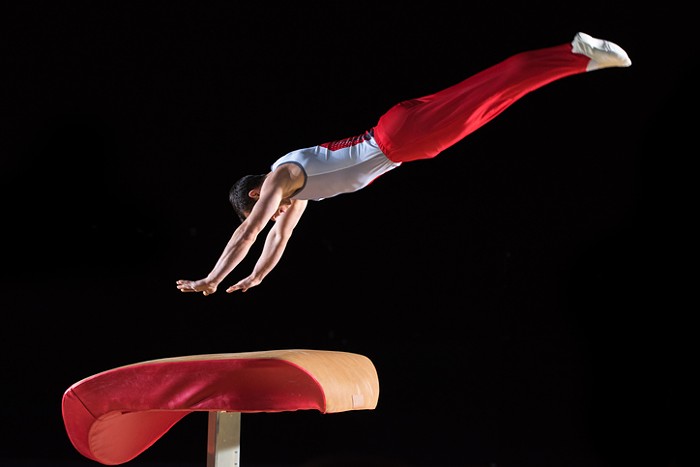 BRB, flinging myself out of a dictatorship. simonkr/Getty Images
Gymnast defects from North Korea: He did so by vaulting over the militarized border between South and North Korea. He didn't set off any sensors. In case you need a reminder, the demilitarized zone at the border is heavily guarded and is around 2.5 miles wide, over 150-miles long, and contains fences, minefields, and armed guards. South Korean officials found the defector and were so impressed by how he crossed the border that they asked him to demonstrate it twice.

Okay, when I first read the gymnast story: I assumed "vault" meant like a pole vault. But, a gymnast-type vault is a very different thing. Did this guy... McKayla Maroney himself over the DMZ?

Birders flock to Queen Anne: A snowy owl is hanging around the neighborhood. Snowy owls are rare to see this far south. Naturally, vanfuls of local birders are trolling around Queen Anne trying to find the bird.

Snohomish County is fucked: In just six weeks, Snohomish County's COVID-19 hospitalization rate increased by 400%. Currently, 80 people in the hospital system are sick with the virus (11 of them are on ventilators). The system saw around 120 hospitalizations during the spring's peak. According to a doctor KING5 interviewed, cases will soon outpace that number in a matter of weeks. Please, stay home.

New York's Orthodox Jewish community had a secret wedding: Earlier this month, thousands of Hasidic Jews in Brooklyn’s Williamsburg neighborhood gathered for a largely unmasked, indoor wedding, disregarding public health guidelines. Despite trying to hide the event from local officials and the press, Mayor Bill de Blasio found out. He called the wedding "amazingly irresponsible" and fined the community $15,000.

A new record: The U.S. reported two million new virus cases in two weeks. Deaths are also increasing and experts say those numbers will likely exceed deaths from the spring despite improved treatment. If this pace continues, 4.5 million cases will be reported in just November.

Winter in the Cascades: Snow is falling in Stevens Pass (8 inches) and Snoqualmie (4 inches). More is on the way this morning, and a winter weather advisory is in effect until 10 a.m.

Snow at the Passes this morning! Snow will continue at times into this afternoon before tapering off later today and tonight. Check @wsdot_passes for the conditions and pass updates: https://t.co/rpYJnNgR7J #WAwx pic.twitter.com/7IoZku8XOF
— NWS Seattle (@NWSSeattle) November 25, 2020

Some showers in Seattle: The day will dry up.

Fox's ratings drop: From before the election to two weeks after, Fox News' ratings took a 32% tumble.

Five-car crash on Capitol Hill: Police "busted" a driver for an alleged DUI last night after the driver was involved in a five-car collision on E Pike Street at Bellevue Avenue. The driver went to the hospital with non-life-threatening injuries, reports Capitol Hill Seattle Blog.

More layoffs for Seattle Theater Group: The theater company in charge of the Paramount, Moore, and Neptune theaters laid off another round of staffers. STG has now laid-off around 81% of its staff during the pandemic. Back in June, before an earlier round of staff cutting, STG had 207 employees. Now, after this latest culling, only 40 people work at STG.

Meghan Markle: Wrote about the miscarriage she had earlier this year.

Honestie Hodges, 14, is dead: You may remember Hodges from when the Grand Rapids, Michigan police department handcuffed her when she was 11 years old. The police were looking for a 40-year-old woman involved in a stabbing when they detained Hodges, despite her mother shouting "she's 11!" over and over. After the incident, the Grand Rapids police faced a reckoning about how they interact with children, especially Black children, and in 2018 passed the "Honestie Policy," which requires officers to use "the least restrictive options when dealing with youths." This month, Hodges died from the coronavirus at just 14. Michigan officials said she is not the youngest person to die from the virus in the state.

Deer steals rifle: A deer robbed a Czech hunter. The hunter was trying to kill the deer, but the deer rushed the hunter, somehow entangled its antlers with the hunter's rifle, and sped off.

Chicago penguins have a little field trip: A shame to see them flouting social distancing guidelines so blatantly.

Culled minks rise from their graves: Denmark culled 10 million minks after a scare about minks breeding a COVID-19 mutation. Officials buried the mink carcasses. But, the minks rose to the surface of their shallow grave. Denmark's environmental ministry said this was just a natural part of the mink-decaying process and to not be alarmed by rotting little mink bodies escaping their tombs.

Ghislaine Maxwell is apparently being "overmanaged" in jail: Maxwell, Jeffrey Epstein's former girlfriend and accused accomplice of his sex crimes, is being held without bail at the Metropolitan Detention Center. According to her lawyer, guards check up on Maxwell every 15 minutes while she's sleeping to "check whether she is breathing," NBC7 reports.

A Thanksgiving Eve crossword: You can do it while your turkey brines.

A glimpse at life without COVID-19: If we could just get a handle on this virus we could go back to doing the things we love like turning the Great Wall of China into a giant slide.

GREAT WALL, GREAT FUN: A tourist uses the first snow of the year to turn the Great Wall of China into a slide. https://t.co/6ECA3BZ0yN pic.twitter.com/xtQ3BCbHpi
— ABC News (@ABC) November 25, 2020