Museums Are Going Through an Existential Crisis, and the Seattle Art Museum Is Not Immune

With the way things are going, it might be a while before we're all able to do this again. Courtesy of SAM/L. Fried
This year has been rough for everyone, and that includes art institutions. With government-mandated closures, reduced capacity, and weary art patrons, museums are collectively looking at a potential loss of close to $30 billion. One survey found 30% of museums are unsure if they'll make it through the pandemic. That could mean no more rainy Sunday afternoons wandering around a museum and overthinking 139-year-old bubbles.

This crisis has also spawned a debate over deaccessioning, the process through which museums sell off pieces in their collections to raise funds. In April, the Association of Art Museum Directors loosened regulations around the practice to allow more financial flexibility. Museums like the Baltimore Museum of Art, Everson Museum of Art, and the Brooklyn Museum have come under intense scrutiny for their decisions to sell off works by artists like Andy Warhol and Jackson Pollock.

Locally, Amada Cruz just completed her first year as Seattle Art Museum's Director and CEO, where she led the sprawling institution through the Asian Art Museum's anticipated reopening as well as Inslee-mandated shutdowns. I called her up a few weeks ago to talk about the state of SAM, and why they don't currently have plans to deaccession pieces from their collection.

We pruned this interview for clarity.

It's been about a year since you started your position, and what a fucking year it's been. How would you summarize it?

I have been here for 15 months, and for six of those months, the museum has been closed. That is an extremely unusual situation. So what that means is that the focus of the job has completely changed. I expected that I would be building upon the incredible work that my predecessors had done. My feeling is that each one of us just takes the work to the next level. Thanks to COVID, those priorities have changed.

Shutting down is one thing but shutting down twice is another. Do you wish that you had just stayed closed?

When we saw that we might be able to reopen, we were incredibly enthusiastic. No one joins a museum's staff—no board member joins a museum's board—to be part of a closed institution. Our mission is to connect art to life. It's much more difficult to do that when you're closed.

We were reopened for two months. Things were going very well. We were just starting to break even. Membership was coming back up. We also were able to go after some big grants from national foundations once we reopened. But when we were told that we had to close down again recently, we also understood why. Again, because the COVID numbers are so high and we want to do the right thing for everybody, for our community, for everybody that works at the museum. It's been challenging.

On the other hand, we're already planning on the next reopening.

Let’s talk money. How has the pandemic impacted SAM financially?

We are actually okay—but we are no means out of the woods because we don't know when this is going to end. We have to be extremely conservative with our finances.

The museum has been dependent upon the gate and earned revenue for about 20% of its budget. Of course, when the doors closed, we lost that 20%. That was hard. The other thing that happened is eventually our members started going away as well. Once we did reopen, membership started going back up, but we actually started a Closure Relief Fund, a special fundraising effort to help us get through this. It was extremely successful. There were large gifts—for example, the recent $2 million gift that came from the Friday Foundation. That was the biggest single gift and we're extremely grateful to them.

We also had small donations coming in online. We had members that not only re-upped, they re-upped for two years. They gave us a little bit of extra. That just shows the loyalty of people to SAM, and because of that, we were able to about break-even. But we have gone through some cash reserves. So that's the part that starts making everybody a little bit nervous, but for the time being we're okay.

How long do you think the SAM could last with its doors closed?

That's a complicated thing to answer. We can stay closed, but we would have to take some pretty drastic measures in terms of expenses. But we don't—we're not going to be closed forever. We know that the vaccine is coming, and I'm anticipating we're going to have rolling openings and shutdowns for the next at least six months. I hope we will be back to "normal" by next fall. Financially, we are not going to be back to where we were for at least two years. So we are being very, very, very careful. 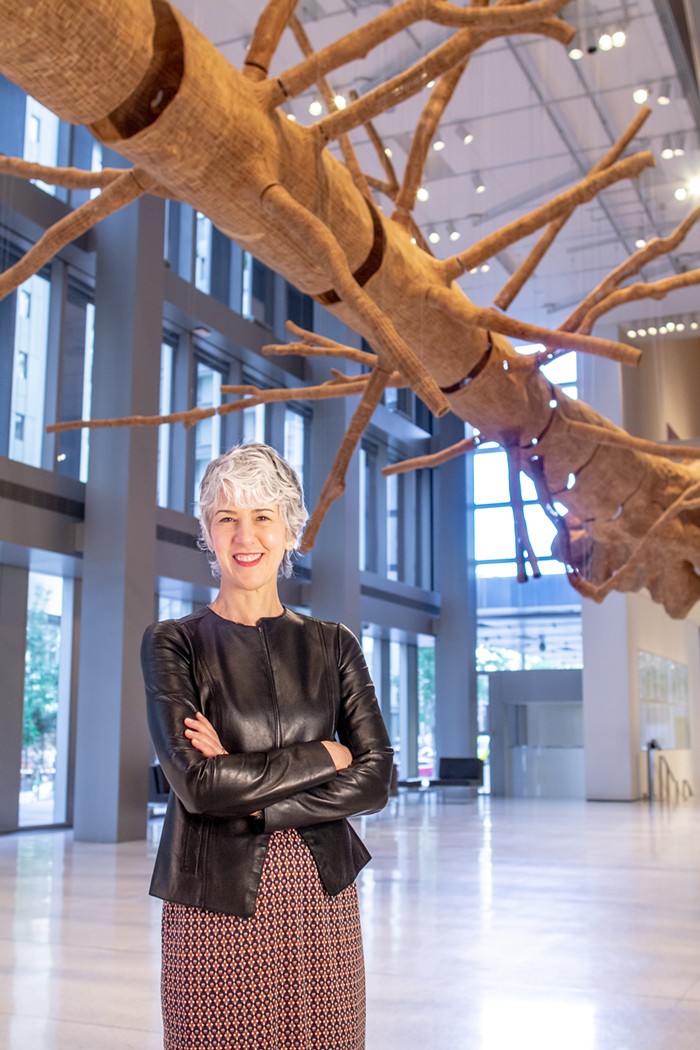 What a wild 15 months it has been for Amada Cruz. Courtesy of SAM
As you know, several museums across the country have taken advantage of the Association of Art Museum Directors (AAMD) loosening up the deaccessioning restrictions. How do you feel about deaccessioning?

First of all, deaccessioning is a very carefully considered process, and it's guided by the rules of AAMD and also the American Alliance of Museums. It's all very official and carefully done. It is something that museums do periodically—let's say every ten years, roughly. It's a way to manage your collection because it's quite often that you have things in your collections that are not relevant. There might be a work of art in the area that you don't actually collect and you just happened to have it—that happens more often than not.

The big rule in AAMD is that if you sell a work of art through deaccessioning, you can only use that money to pay for other works of art. It's a very good reason because let's imagine you are a museum that is going through some budgetary problems—which frankly in the nonprofit world is quite common. What is to keep you from selling the Monet on the wall every time you have a budget crunch? And those are very real temptations. So to mitigate that, AAMD has these hard and fast rules.

Because of the incredibly challenging situation we're all under because of COVID, AAMD made an exception and said that through deaccessioning, you can pay for direct care of works of art. And that can actually then free up other monies to pay for other things. The rules actually do not say that you can pay for operating. There's a bit of a misunderstanding about what has recently happened. You can take advantage of this exception if you are in very extreme financial duress.

Do you think that that's a good way to try to diversify your collection? Most museum collections have an over-representation of white male artists. Is deaccessioning a good way for museums to try to get more Black, brown, gay, and/or women artists into the collection?

Everybody has their own collecting policies, and many museums, especially now, have started putting that language around diversifying your collections in those policies. So, yes, you can actually deaccession and use that money to increase your holdings of BIPOC artists. Absolutely. That's one way of doing it.

The other way of doing it indirectly, perhaps—but a way that has very long-term benefits—is actually diversifying your staff and your board. Because the people who are making the decisions, if they are a diverse group of people, you're going to end up with a far more diverse collection.

You know, SAM has been doing some wonderful work in that area in the last few years. Since 2015, 47% of the works acquired by SAM have been by BIPOC artists, and we are certainly focusing on that now as well.

Is deaccessioning works something that SAM has done or is currently considering doing?

Yes we do. Now, SAM tends to take a conservative stance around deaccessioning for all the reasons that I talked to you about before. You want to make sure that there's trust in your institution from art collectors. If there's an art collector, let's say Jinny Wright, who has given us extraordinary works of art, that was because she knew that the museum was going to take care of those works of art in perpetuity. So we actually hold the works for the public benefit—they don't belong to us per se. They belong to the public, and we take care of them forever. If we start deaccessioning too aggressively, all of those collectors start losing faith and trust in you. Why should they give something to SAM when we're going to sell it? In the long-term, it's better to actually take a conservative stance around deaccessioning.

So there are no plans right now for SAM to take advantage of the loosening of restrictions around deaccessioning?

Not for the moment. But part of the reason is because we do have some funds to buy art. We have, for example, the Kimisha Turner funds—the commission that we then turned into a purchase. We actually made that purchase from our own funds. And we also have some other funds as well for American art—what does it mean to be American? That's a huge field. We do have some other sources, and for the moment we won't be doing that, but we may deaccession in a few years. We just have to see. It's just standard procedure.

How is SAM making sure it's a leader in equity?

The work is never over. All of us just need to constantly be really mindful of it. The efforts to diversify the staff are going to be really important, diversifying the board—that's really key. Making sure that equity work is embedded in everything that we do. Priya [Frank]'s position as a Director of Equity, Diversity and Inclusion is also extremely important because she is in the room, making all of those important decisions with us and also lots of interactions with the board. We just have to constantly be committed to it. I know that it's a journey and that it's going to take a while, but also that we're not going to stop doing that work.

This Slog post is part of State of the Arts, a new series that looks at the creative ways leaders in our arts communities are overcoming our darkest winter. Check Slog daily for fresh updates.