Hannah Krieg
Back to article

I bring my own supplies to work downtown, and commute from outside city limits. I'm not in a union trade, but I get free parking too, right?

The same carpenters that just got raises up to like $45hr are now crying about parking? When did these guys become such drama queens?

@1: It will depend on what the city ordinance says
@3; Any idea how ignorant you sound?
@4; Workers need to get to jobsites

Kshama So
She gotta go
Me oh my oh

I doubt this will see the light of day during budget season. Gonzales and Mosqueda are not going to risk alienating some of their union support during an election and let's face it Sawant doesn't have many (any?) allies on the council. What will be interesting to watch if this ever does come up is that many times city regulations like the ones cited in this article have a carve out for collectively bargained agreements. If something like that is inserted into this resolution it will become fairly pointless.

I've been union-represented in multiple workplaces in Seattle. It has always been a beneficial experience, both for me personally, and for the vast majority of my fellow union-represented workers. This talk (and it's just empty talk, see @9) by CM Sawant is blatant meddling in a union's business, by a group which has no love for the Northwest Carpenter's Union. It should not be represented as anything but a cynical effort to hurt working people.

Self-imagined revolutionary vanguard types, like CM Sawant and her Socialist Alternative (SA), have always despised American labor unions, for caring more about their members' well-being than about the political programs of self-proclaimed revolutionaries. SA wants to destroy global capitalism; the majority of the Northwest Carpenters' Union, like the majority of American labor unions since at least the New Deal, have wanted to appropriate the benefits of capitalism for themselves. The PJM faction's rogue actions harm their own union and fellow members, which is why SA and CM Sawant support the PJM faction. They need to be told, clearly, loudly, and repeatedly, that their harmful meddling is neither acceptable nor appreciated.

(Hannah, please know that the term "scab" is the filthiest epithet in the union vocabulary. There is literally nothing worse a union-represented employee can call another human being. The PJM faction's use of this term to describe their fellow union members tells us exactly how much contempt the PJM faction has for their union brothers and sisters. A scab is a strikebreaker, called in to weaken or end the union's strike. The union has not decided to strike, the PJM faction has, and they speak for no one other than themselves. It is the PJM faction, CM Sawant, and Socialist Alternative who are the problem here, not the loyal members of the Northwest Carpenters' Union.)

@11 When your union leadership prevents rank and file from striking, I think "scab" pretty much defines them pretty well. There is a groundswelling official and unofficial strike action going on all around the country. If union leadership cannot get out in front of this, then socialist politicians will gladly fill that void.

@12 Thanks for demonstrating why following Sawant and SA's lead on anything is a fools errand. The union leadership was not preventing anyone from striking. They were abiding by the terms of the agreements that they approved (with member support) that prohibits striking certain worksites. Violating those contractual agreements opens them up to lawsuits which could bankrupt the union and lose all the dues the members have been paying.

Your comment demonstrates how little SA and Sawant actually care about the details or the peasants who get in the way of the glorious revolution. Collateral damage is acceptable as long as you are advancing the movement and furthering your goal of burning down the capitalist state. My only hope is this further burns the bridges between Sawant and organized labor and come Dec people have finally had enough of her divisive, look at me brand of politics.

Why stop with just free parking for the carpenters...why not make the entire city "free parking".

The streets belong to the people and why should we have to pay to park on our own streets. It would get rid of the meter maids... er I mean Parking Enforcement... some of the most hated public servants on the books, reduce the bloated government .... and we can use that money to pay for the homeless or some other perk that Sawant wants.

The downtown business folks will love it. Hell I love it and I just about hate everything in this city now days.

Construction workers are a special category though. Tech and business can be remote and have flexibility. But if your job is to pour concrete or operate a crane you gotta get there on time. Parking for construction workers should be a courtesy expenditure paid by the employer, that can be used for a tax deduction from the city.

Or better yet... Here are some ideas:

1) we could do the Seattle Thing and make paying for parking downtown voluntary.

2) We could make paying for parking mandatory if you are white, male and over 40.

3) We could make paying for parking mandatory if you make over $100,00/year

Yeah.... that feel good stuff speaks to the higher, ultraistic bull plop that comes from our leaders. .

@17 Are restaurant workers, dry cleaners, janitors... all poorly paid, a non special category despite being unable to work remotely?

Shouldn't the person serving your lunch, espresso or cleaning your toilet be afforded the same rights, courtesy and perks as a carpenter.

Shouldn't the city pay for the parking as it benefits everyone, not just the employer?

Jesus Christ was a carpenter... hasn't somebody asked the Church for advice or an opinion?

@3 The carpenters per their new contract get an $1.50 hour for parking. I have my doubts they're the ones complaining.

For the work I do parking is also a billable expense. Their may well be others who have that built into their contract.

One wonders if Sawant actually takes time to talk to those she claims to represent or is this just her latest cause du jour?

@12: "If union leadership cannot get out in front of this, then socialist politicians will gladly fill that void."

By your avatar and your Slog comments, it seems pretty clear you share some of the delusions which animate CM Sawant and Socialist Alternative. As a former union man myself, I sincerely hope you understand they will sell you out easily, quickly, and (above all) cheaply, the moment they perceive the slightest of advantages, real or imagined, in so doing. 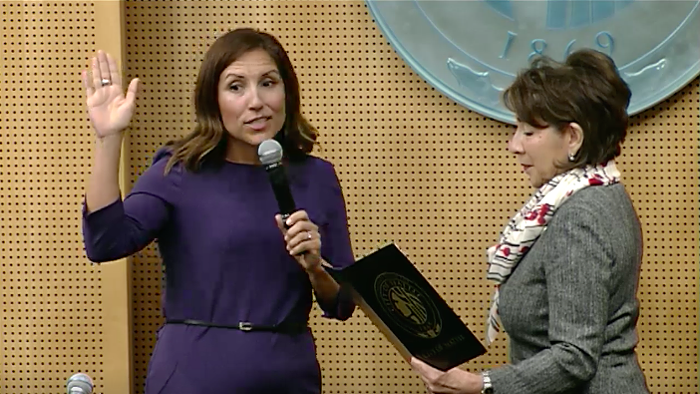