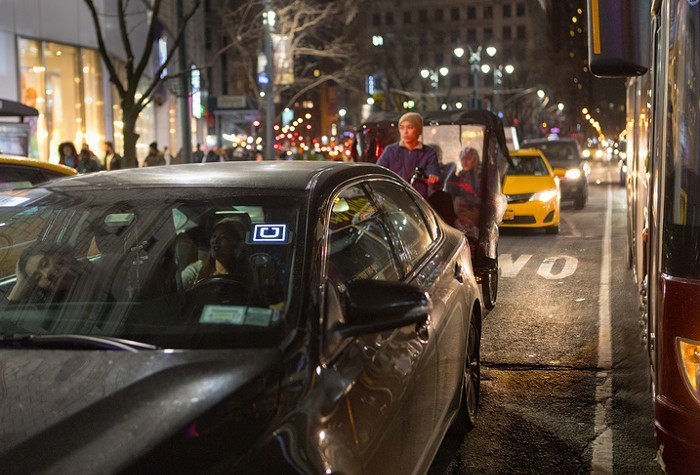 House Bill 2076 might give ridehail drivers outside Seattle a pay raise and some benefits, but other labor groups say the cost of the deal runs too high. NYCSHOOTER/GETTY
A new proposal in Olympia tests whether Washington state Democrats want to do what's good for the moment or what's arguably best for the labor movement in the fight to protect workers from companies "disrupting" industries by turning every job into a "gig" with no benefits.

Washington's bill, sponsored by Seattle Rep. Liz Berry, would set a statewide wage floor and provide some benefits to app-based drivers who haul around drunk idiots for companies such as Uber and Lyft. Years of organizing won most of those protections for Seattle-based drivers already, and this proposal would essentially extend them across the state while prohibiting the City (or any other one, for that matter) from giving drivers any more benefits.

Uber, Lyft, and House Democrats love the bill, but labor is split. Teamsters 117 and its affiliated Drivers Union, which calls itself the voice of 30,000 app-based workers in the state, want to take the deal with the corporations, avoid a risky and expensive ballot initiative fight, and keep relying on Democrats to push for incremental improvements over time. But the Joint Council of Teamsters No. 28 (i.e. the regional organization), the Massachusetts AFL-CIO, and the National Employment Law Project see the deal as an unacceptable concession that sets a dangerous precedent for a two-tiered benefit system that threatens workers' rights here and across the country.

Speaking for Joint Council of Teamsters No. 28, Michael Gonzales said the bill "completely bypasses the fact that these employees are misclassified in the first place. That's the fundamental issue that needs to be fixed."

The specter of California

Unfortunately, it's impossible to understand this story without understanding what happened with a ballot measure in California.

As some of you may know from firsthand experience, the entire business model for app-based companies such as Uber and Lyft relies on them classifying their workers as independent contractors rather than employees. That classification allows the companies to skirt state and federal labor laws: They don't have to honor the minimum wage, pay payroll taxes to cover benefits, pay premiums to cover workers' compensation and unemployment, abide by certain anti-discrimination standards, or worry about pesky problems such as their workers forming unions — independent contractors can't collectively bargain.

Unsurprisingly, this model has become increasingly popular over the last decade. A report from the International Labor Organization found that "the number of online web-based and location-based (taxi and delivery) platforms rose from 142 in 2010 to over 777 in 2020" across the globe. Nearly 30% of those platforms started in the U.S. alone. And according to a 2021 Pew survey, 16% of Americans say they've worked for the apps at some point in their lives. That same survey showed that more than 40% of current gig workers with "lower incomes say it has been their main job over the past year." So that's millions of Americans working without benefits, and many of the poorest working full time.

In 2019, a majority of lawmakers in California argued that the state shouldn't treat Uber and Lyft any differently than it treats other companies, and so they decided to pass a law that basically classified ridehail workers as employees rather than contractors. In response, the app-based companies dropped more than $200 million on a statewide ballot measure called Proposition 22, which more or less permanently re-classified those workers as independent contractors but required app-based companies to provide some weaker benefits, such as a wage floor, some protections against discrimination, and some subsidies for health care and accident insurance. Last year a judge ruled the measure unconstitutional, and so now it's going through the appeals process.

Enter House Bill 2076. This proposal gives drivers many of the benefits they say they want while avoiding a pitched ballot battle with Uber and Lyft, according to Peter Kuel, president of the Teamsters 117-affiliated Drivers Union.

Those benefits include wage floors, paid sick time, and workers' compensation. That wage floor, advocates say, would amount to a substantial pay raise outside Seattle. "In the city of Tacoma, for example, minimum driver pay per-mile will increase by more than 40% and per-minute pay will more than triple," said Kerry Harwin, communications director at the Drivers Union. The workers' compensation provision, however, comes with an asterisk — workers wouldn't be covered for injuries sustained during driver waiting time or in-between rides. So if you get hurt without a passenger in the car, then good luck.

The proposal convenes a task force to determine what rates the corporations should pay for unemployment insurance, paid family medical leave, and long-term care — so whether or not the state ends up losing some money on that deal is TBD.

As in Seattle, the bill would create a Driver Resource Center run by a nonprofit that would set up a process for drivers to appeal deactivations. (Drivers claim the companies often kick workers off the apps for little or no reason, which robs them of money, and so this center would aim to help with that.) The ridehail corporations would also need to establish "nondiscrimination policies," conduct background checks on drivers, and impose other safety protections.

Meanwhile, the companies get a bunch of cool stuff, too. Chiefly, they get to continue classifying their workers as independent contractors. They also get a ban on local jurisdictions passing any more regulations on them. (Seattle's pay rates would continue to apply to Seattle drivers, but the bill would effectively void the City's local permanent ordinances on minimum compensation and deactivation, and the City’s COVID-19 gig worker sick leave law would no longer apply to ridehail drivers.) Plus, they get a great deal on car insurance!

(Seriously, the bill drops the requirement for these companies to maintain underinsured motorist coverage of $1 million and replaces it with a requirement only to maintain $100,000 per injury to another person and $300,000 per accident. During testimony, a spokesperson for WA's Insurance Commissioner said he didn't like that.)

The bill is technically silent on collective bargaining, so it doesn't prohibit workers from trying to unionize. But since the bill doesn't classify the workers as "employees," any effort to unionize would have a hard time winning an inevitable court battle, especially without changes to the National Labor Relations Act.

Washington poised to avoid a fight

During their testimony in committee, Uber and Lyft lobbyists fawned over the bill. And the companies themselves love the bill so much that they filled a PAC called the Washington Coalition for Independent Work with $2.4 million in a transparent threat to launch a ballot initiative should lawmakers so much as even think about passing a law to classify their independent contractors as employees.

Though representatives from the Drivers Union claimed they didn't negotiate details of the bill under duress, a Drivers Union member told Labor Notes that the threat of a ballot initiative amounted to Uber and Lyft "holding the gun at our heads." After all, Prop 22 passed with 58% of the vote, the companies have deep pockets, and a successful initiative could strip rights that drivers in Seattle already won.

Moreover: If anybody on either side of this issue had any polling, they wouldn't show it to me, but that Pew survey found that "when asked what is the most appropriate way to classify drivers for ridehailing companies, the public is more likely to say 'independent contractor' rather than 'employee.'" That said, the same survey found that "57% of Americans think those who drive for ridehailing companies deserve greater legal protections from being mistreated."

At a press conference on Tuesday, Patrice Tisdale, general counsel for the Drivers Union, said no one would turn down "additional money," but otherwise the organization proudly supported the bill. Other members of the Drivers Union praised the proposal with urgency in their voice. Bright Nkrumah, an Uber driver and father of four who lives south of Tacoma, held up his EBT card as evidence that driving 50 hours per week still wasn't enough to put food on the table without relying on the state. If the Governor ends up signing this bill, he'd get a pay raise soon.

But Steven Tolman, a lobbyist for the Massachusetts AFL-CIO, called the legislation "BS" during his opposing testimony over the weekend. "They should be held to the standard of every other business in the state of Washington," he said, referring to Uber and Lyft.

National Employment Law Project executive director Rebecca Dixon agreed. In a letter sent to all members of the Washington Senate last Friday, she said the bill enshrined "a second-class employment status for Washington’s [app-based] drivers, who are disproportionately people of color and immigrants," and added that it "harkens back to the racist exclusion of farmworkers, domestic workers and tipped workers from the Fair Labor Standards Act."

"Washington State should send the message that it will not tolerate attempts to exclude categories of workers from the baseline rights and protections to which all employees are entitled," she said.

And closer to home, as I mentioned earlier, the Joint Council of Teamsters No. 28 came out against the bill basically for the same reason. The union also represents delivery drivers, who will likely be the next casualty of gig-ification.

When asked what he'd say to an Uber driver outside Seattle who wanted a guaranteed pay raise next year rather than a ballot fight, Gonzales said he would tell them he understood their pain and that he knew it was a complicated issue, but he'd argue that winning employee status for ridehail drivers was worth the fight. "It's tempting to take what's on the table because it satisfies your need at the time, but I'd tell them that what I'm trying to do is satisfy the needs of communities and other workers like you going into the future," he said.

House Democrats passed the bill off the floor last week. On Monday the Senate Transportation Committee passed it out with minor adjustments, and now it's up to the rest of the body to decide whether to take a deal, take on the corporations, or suddenly run out of time.

This post has been updated to clarify the effect of preemption on Seattle's protections for ridehail drivers.