People are calling these investments "historic" and "unprecedented." 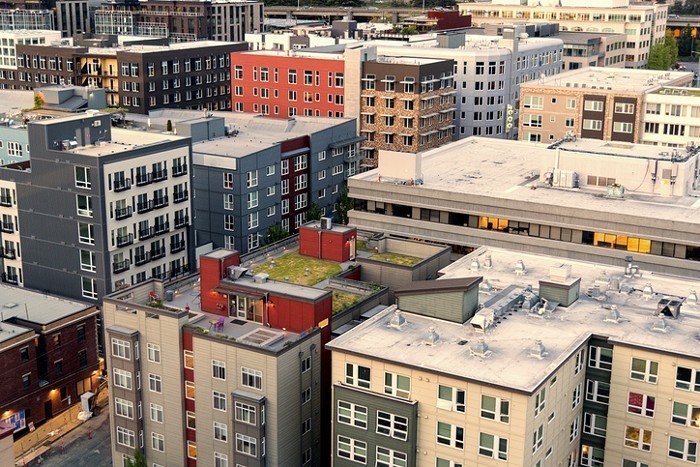 More like these please RICHARD THEIS / EYEEM / GETTY IMAGES
This session lawmakers in Olympia failed to move on legislation to increase the supply of market-rate housing statewide, which means Washington’s hot-hot market will stay hot, and our housing deficit will likely continue spiraling out of control. That’s bad news for people looking to buy homes, and bad news for lower-income renters forced to compete for apartments with well-off people gainfully employed by our region’s neato technology companies.

Setting that particular part of the issue aside for a moment, Democrats did do well to dedicate hundreds of millions of dollars (mostly from federal sources) to help fund affordable housing units, permanent supportive housing, and homeless shelters across the state — most thanks due to strong advocacy from Rep. Nicole Macri (D-Seattle) and Sen. June Robinson (D-Everett). Including the money the Legislature appropriated toward these ends last year, total funding to create more affordable housing and shelter will rise to more than $708 million for the 2021-23 budget cycle.

Depending on how we end up spending the money, all that funding will eventually help reduce an estimated affordable housing deficit of nearly 200,000 units (i.e., according to the 2019 report I linked to, the number of rentals available to people at or below 50% AMI), and prevent people from falling into homelessness. The latest data show that around 40,000 people experienced homelessness in King County alone in 2020.

That said, on the equally pressing issue of keeping people in the homes they currently have, the state will add $100 million in utility assistance and around $116.5 million for rental assistance (which includes $71.5 million in federal funds plus approximately $45 million in expected returns from the state's document recording fee), along with hundreds of millions in other financial supports. The budget also includes $4.5 million for foreclosure prevention programs for hurting homeowners, and $3 million for groups offering pre-eviction civil legal aid, which will hopefully help people access these supports. The $27 million lawmakers added to the landlord mitigation fund could incentivize them to rent to tenants who use public subsidies, and it can also be used in eviction court to cover back rent, so that could help keep people housed, too.

Assuming people facing eviction know the money is available to them, the $123.5 million in rental assistance will go far but likely won't meet the ongoing need. King County’s Eviction Prevention and Rental Assistance Program stopped accepting applications for assistance last Monday, leaving an estimated 8,000 people out of luck. Providers say average assistance requests run around $11,000 per household, which would put the need in King County at roughly $88 million. According to the Seattle Times, the Department of Commerce was supposed to toss $66.5 million more in rental assistance at King County this year. I've asked the county for comment and will update when I hear back.

During a press conference after the close of session, Rep. Macri acknowledged that the "need for rent assistance far outstrips the supply of rent assistance," as has "long been the case." She noted that one-third of people who requested assistance previously reported struggling to pay rent, and every year landlords routinely evict thousands for nonpayment of rent. "This is a national challenge we have. Washington has gone further than most states in putting our own discretionary dollars toward rent assistance," she said.

Digging a little further into the details, in its capital budget, this session lawmakers put $113 million into the Housing Trust Fund, set aside $240 million for Rapid Housing Acquisition, and dumped $60 million into more rapid housing acquisition through a new benefit spearheaded by Seattle Rep. Frank Chopp called the Apple Health and Homes program.

Money from the Housing Trust Fund helps build and maintain affordable housing units that stay affordable over the longterm, and Rapid Housing Acquisition money will help the state quickly snap up existing structures to transform into permanent supportive housing (i.e. affordable housing combined with mental health, addiction treatment, and other services) and shelter. The Apple Health and Homes program creates an agency to oversee a process that pairs permanent supportive housing units with people who qualify for certain Medicaid supports in order to solve administrative mismatches between supportive housing construction and operational costs. (As me any more about that particular program, and I'll get back to you in two years.)

Press releases and spokespeople in the low-income housing world called these investments “historic” and “unprecedented," and they're right to do so. In the last budget cycle, lawmakers put $230 million into the Housing Trust Fund over the course of two years — this cycle’s budget invests $60 million more than that in that fund, and it also adds hundreds of millions in rapid acquisition money.

Estimating the number of housing units all this money will help build, however, proves difficult due to variance in the cost of different kinds of units, availability of other funding sources, and several other contingencies.

The Governor's office says that this session's investments into the Housing Trust Fund and the rapid housing acquisition fund will yield "approximately 3,890 additional housing units that will help more people transition into safe, stable housing situations," and his number for total housing and homelessness spending (combining the capital and operating budgets) is $829 million this session.

To give you a rough sense of what’s going on here, last year 20 applicants requested nearly $90 million from the Housing Trust Fund's 4% program to create 2,120 units of permanently affordable housing. So, very roughly speaking, $113 million this year might build a little bit more than that. The $300 million total for rapid housing acquisition could lean more heavily on temporary shelter than on permanent supportive housing, so it’s hard to know what the balance there will be. In addition to all that housing and shelter, there's also $8.5 million for youth and young adult housing, and $60 million for crisis stabilization facilities.

Those homelessness and housing programs don’t run themselves, though. To help nonprofits pay and retain the people who do, the operating budget includes $55 million in stipends for the state’s homeless provider workforce. That money also includes a study to figure out why we pay service providers so poorly and to suggest structural reforms for improvement. On top of that, lawmakers added $7.5 million in grants to homeless providers with state contracts, which they can use to give bonuses, increase services, or cover administrative overhead.

In another major homelessness spending priority, there's more than $45 million to move people living in tents near highways into housing, "with an emphasis on permanent housing solutions." How sweepy will that money be? Hard to say. The budget restricts those funds to recipients who provide "outreach, housing, transportation, and other services needed to assist individuals residing on public rights-of-way with moving into housing."

So, all told, nothing to spur market-rate housing (which will make a lot of that affordable housing much more expensive to build), lots to spur affordable housing and the kind of housing needed to end unsheltered homelessness, and a good but insufficient amount for rent assistance.