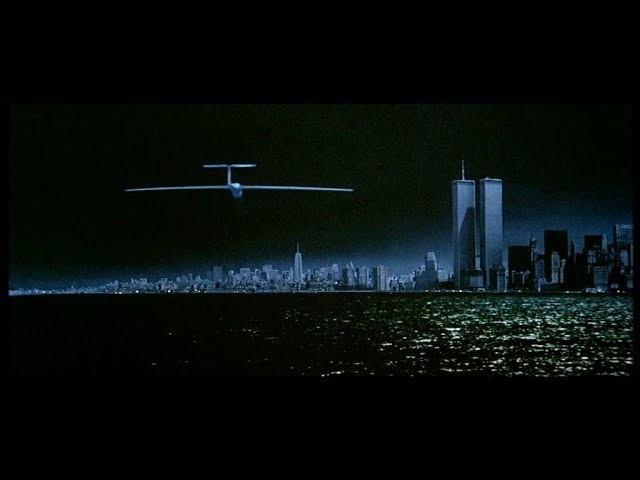 "Flight on the Twin Towers" Escape from New York -1981
The year is 1997. And all of the inveterate criminals of America are spending life in Manhattan, which has been transformed into a gigantic maximum-security prison. This is how the US dealt with a 400 percent increase in crime. Give the poor what is now a gated community for the world's super-rich. But it was almost impossible for the bulk of white Americans in the late '70s-early '80s—the period Escape from New York's director, John Carpenter, conceived and completed the film—to be nothing but pessimistic about the future of urban America. Indeed, urban back then actually meant black (urban music, urban fashion, urban English). This is certainly why the mayor of Escape from New York's Manhattan Island Prison is a black man, Isaac Hayes. In the age of suburbs, blacks found themselves at the bottom of society, abandoned in cities, and told to "Drop Dead" by President Gerald Ford.

Escape from New York is very much like the whole Seattle Is Dying movement, in the sense that both offer the same explanation for poverty and crime. You are poor because you made bad choices. You are a criminal because you are all evil inside or too lazy to make something of yourself, the cement of which is found in the hours spent hard at work.

Another similarity between Seattle Is Dying's perception of the homeless and criminals and the presentation of the fallen men and women (mostly men) in Manhattan Island Prison is that they are totally useless. They can't do anything but foul the streets, smash windows, steal, shoot each other over scraps. They are a void into which society's "limited" resources are wasted.

In fact, the most shocking scene (at least for me) in Escape from New York has nothing to do with violence. It's of the group of men in Central Park with a variety of implements in their hands and grass growing everywhere. It has not occurred to them to grow food. It's apparently better to use these modified bats and planks to bash people who have totally nothing than to dig up the earth and plant corn. Weirder yet, Central Park is a drop-off zone for prison food and supplies. Criminals are that hopeless, that useless to society. They can only look to the sky for free stuff, and never to ground, to farming, which demands, of course, work. (But even CHAZ had a garden.)

Also, both the film and the Seattle Is Dying movement, which had a big event on Thursday organized by Downtown Seattle Association, present the radical left as dangerous. In the movie, the radical socialist tries to kill the president by hijacking Air Force One and crashing it into Manhattan, and not too far from Twin Towers, which play an important and even haunting role. In Seattle, Sawant is a killer of jobs. Both radicals are aligned with the criminals.

But John Carpenter, who is a superbly visual director with an exceptional sense of pace and shot composition, ultimately parts with Seattle Is Dying when it comes to the representation of the rich and powerful. The US president, who is captured by Manhattan Island Prison's savage convicts and is liberated by its civilized ones, is a total asshole. In his weltanschauung, there's only one convict; they are all rotten to the core and deserve to rot in prison. For Carpenter, saving the president was a total waste of time. But this radical conclusion should not be a surprise because anyone who has seen They Live!, a classic of Red Hollywood, knows that, at the end of the day, Carpenter sides with downtrodden, the down-and-out, and not, like Seattle Is Dying, with the princes of the city.

Escape from New York: 4K Restoration screens at the Grand Illusion between March 19 - March 23. This is an in-person event. Find other suggested events by The Stranger right here.