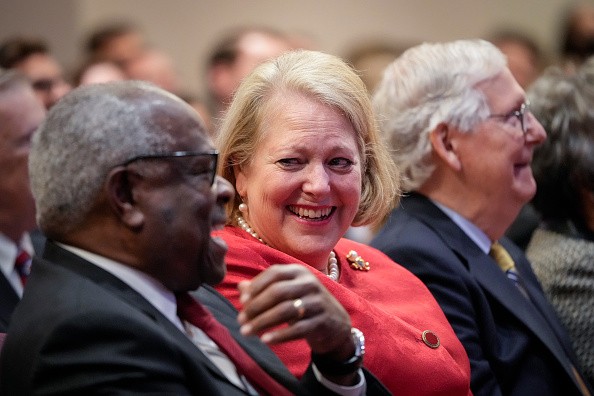 Ginni Thomas claims she doesn't talk about her "activism" with her husband, one of nine people making judgements on cases about overturning the 2020 election. LOL. Drew Angerer / GETTY
Harrell temporarily closes the northbound bus stop on 3rd Ave: What will that do? The Seattle Times says it will force transit users to "shift one block south on Third, near Ross Dress for Less, consolidating riders in one location while thinning crowds on a block that’s long frustrated city officials." In a statement, a spokesperson for the Mayor said the shift aims to "increase visibility into criminal activity by SPD and to reduce areas of congregation." 🧹 🧹 🧹 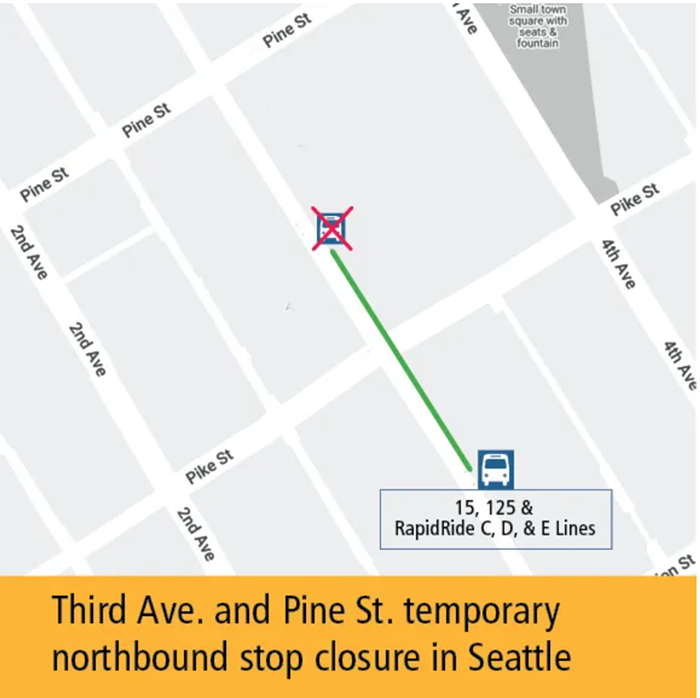 Any open-air drug-dealing, kissing, fencing, or conversation will need to move down the block a bit. King County Metro
2022 could be rough for Washington Democrats: According to the two people responsible for holding Democratic majorities in the State House and the Senate, the worst-case scenario would see the the GOP taking the House, and the best-case scenario would see Democrats picking up a seat in the House and the Senate. Citing polling from February, Northwest Progressive Institute Executive Director Andrew Villeneuve offered a rosier picture. In short, Dems shouldn't be worried about the places they say they're worried about west of the mountains:

The only geographic region of the state that preferred Republican control of the statehouse was Eastern and Central Washington, where there is tons of enthusiasm for the R's. King County, North Puget Sound, South Sound all had majorities favoring continued Democratic control. Olympic Peninsula and Southwest Washington had a five-point plurality favoring Democrats.

Three shootings today, so far: Cops found one man dead and another injured near the Tukwila Light Rail station, KIRO reports. Sound Transit directed trains not to stop at the station while police investigate. Around the same time this afternoon, Seattle Police responded to a report of a shooting at 3rd and Yesler. They found one person injured. Earlier this morning, someone shot and killed a man and injured a woman a couple blocks off Rainier in Columbia City.

The minimum wage in WA is $13.69, meaning tenants would have to work an additional 18 hours a month to afford this. The majority of tenants who have received an increase notice are BIPOC (56.1%), and their average increase was $124 more than what white renters received.
— Housing Justice Project (@hjpkingcounty) March 24, 2022

One escalator is still broken in the Capitol Hill Light rail station: The Capitol Hill Seattle Blawg offers us the reason why — "braking components" — and also an expected repair date of April 1.

Reason #1193 why I'm not excited to live in a world with Amazon drones flying around everywhere: One of those little freaks fell out of the sky and started a wildfire in Oregon, according to Katherine Long at Business Insider.

A federal report said the drone’s engines failed when it was 180 feet in the air. The 89-lb drone was "tumbling in uncontrolled free fall until it contacted the ground."https://t.co/P1HwPCo2ei
— Katherine Long (@_katya_long) March 24, 2022

Seattle Rep. Frank Chopp pisses off the King County Regional Homelessness Authority: KCRHA wanted to "diversify" the nonprofits who build tiny shelters, which the state thinks are okay to build in emergencies but not as replacements for longterm housing, and so it launched a competitive bidding process with $2 million in state funds. Catholic Community Services and Chief Seattle Club won the bids, but then Chopp allocated the money to the Low-Income Housing Institute, a nonprofit he founded. The Seattle Times has the story. Scandal.

Here's the weather report from Mudede: As you sleep and dream tonight, there will be lots of clouds in the sky. The Accuweather prediction is that they will be rainless and noiseless. Eventless night clouds of this kind always look like they are going somewhere in secret. They do not care about you, your dreams, and your city. These dark and thick clouds have business elsewhere, and one wants to wake up and warn those in this elsewhere of what's coming their way.

Lol holy shit, read these unhinged texts from Ginni Thomas: The batshit rightwing activist married to Justice Clarence Thomas pressed Trump Chief of Staff Mark Meadows to "pursue unrelenting efforts to overturn the 2020 presidential election...during a period when Trump and his allies were vowing to go to the Supreme Court in an effort to negate the election results," according to the Washington Post. In the 29 messages they exchanged, she sent him a wide range of conspiracy theories regarding election fraud and encouraged him to stand with Trump. My favorite: “Do not concede. It takes time for the army who is gathering for his back.” Or maybe this dig on Nov 7: “House and Senate guys are pathetic too... only 4 GOP House members seen out in street rallies with grassroots... Gohmert, Jordan, Gosar, and Roy.”

Biden wants to kick Russia out of the G20, The New York Times reports. It's basically a meaningless gesture designed to continue pushing Putin away from the big kids' table. Biden suggested the move at the big diplomatic conference in Brussels today, where all the countries aligned against Russia got together to reaffirm their stances.

More sanctions for the motherland: Today the U.S. announced sanctions on members of Russia's parliament and members of its defense industry. The New York Times quotes Treasury Secretary Janet Yellen describing the move as a way to reduce the country's ability "to finance and carry out its warfare and atrocities against Ukraine."

ABC reporter asks Biden if he was too quick to rule out world war 3 pic.twitter.com/OEjl9ijWhu
— Aaron Rupar (@atrupar) March 24, 2022

That kinda shit leads to this kinda shit: "56 percent of Americans — and 43 percent of Democrats" think Biden needs to be "tougher" on Russia than he has been, according to a new poll from The Associated Press and NORC. I understand the desire to support a democratic country trying to repel a brutal dictator, but you can't really get tougher than passing targeted sanctions that go after Russian elites, broad sanctions that will end up crippling the economy and hurting the Russian people, sending a bunch of weapons to Ukraine, and training their fighters for possible Russian escalation. If this shit keeps up, a bunch of well-off American assholes glued to cable news are going to push the country into an armed conflict with a nuclear power, and that's not going to be good in my view!!!

Read this analysis on the US-backed Saudi-led war in Yemen: The whole point of caping for Saudi Arabia's murderous regime was to keep that sweet sweet oil train running smooth and to crush the Houthis to stop the bloodshed and famine in Yemen. But, as this report from the Quincy Institute shows, neither of those two things is happening. Seattle Rep. Adam Smith, who chairs the House Armed Services committee for the next ten minutes, needs to spearhead a War Powers Resolution to end US support for the Saudis in this war.

Nice job in Congress, conservative Democrats: "Republican voters are more likely than Democratic voters to say it 'really matters' which party gains control of Congress in this fall’s midterms," according to a new poll from Pew. The poll also shows generic Republican and Democratic congressional candidates running tied races, 43 to 43, with 10% undecided.

Remember when Chase told you about the full release of The Subconscious Art of Graffiti Removal, "a short experimental documentary that examines the unexpected artistic merits of graffiti removal efforts?" Well, I'm now here to tell you that it's up and free and beautiful: 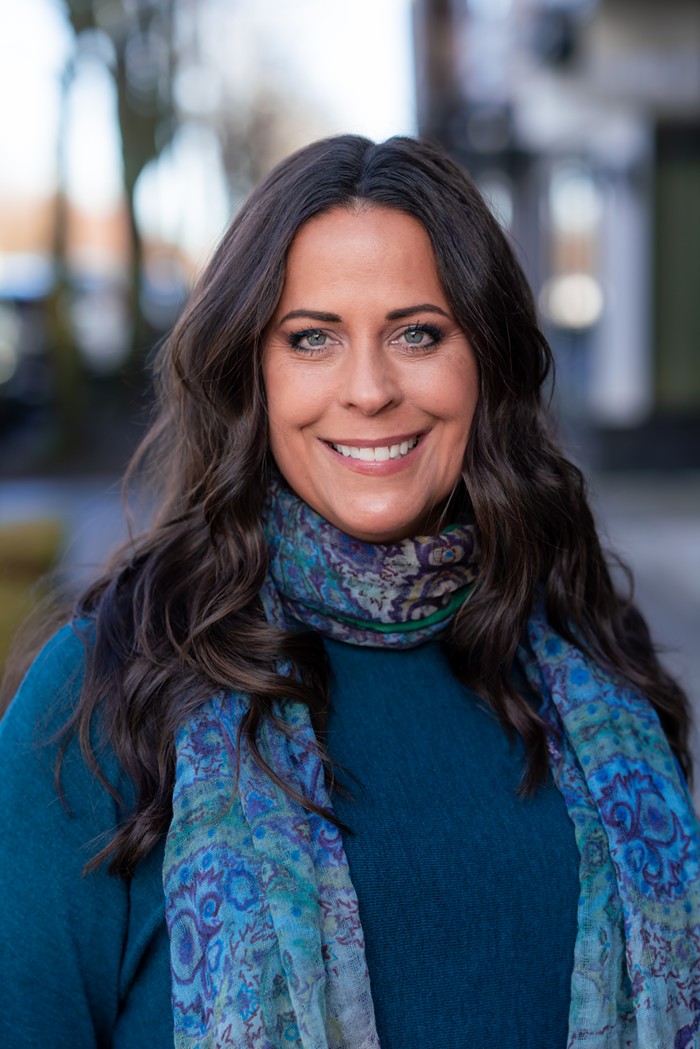 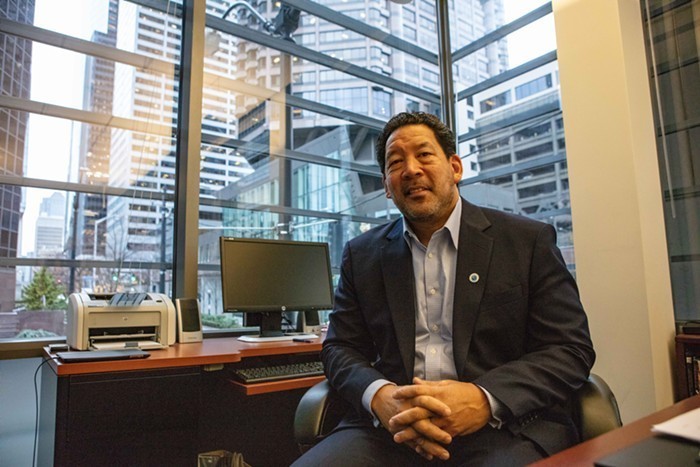