Seattle has a rare chance to catch these vibes this April.

What's that sound? Hear it starting April 1 at the SIFF Cinema Egyptian and starting April 20 at the Northwest Film Forum. Memoria
The cinematic event that is Memoria is an experience so poetic and profound, it left acclaimed film critic Justin Chang bowing down in front of the screen in what he described as a “quasi-religious posture that cinema at its most rapturous can inspire.” Even as this description earned the longtime stalwart of the LA Times some ribbing online, this is about as good of an entry point as one could get to understanding this film's impact.

Making meticulous use of sound to create an evocative experience, the dedicated auteur that is director and screenwriter Apichatpong Weerasethakul has created another work of art. It washes over you with a patient sense of grace, gently building to a finale as emotionally overwhelming as it is existentially Earth-shattering. (Big words for a big movie!)

It also is a film that had an uncertain future for a good while as its release hung out in limbo. Following its premiere at last year's Cannes Film Festival, the film's distributor Neon initially announced it would release in theaters as part of a "Never-Ending Theatrical Tour." The idea was to eschew the traditional theatrical rollout of multiple venues at the same time and instead go city by city, screen by screen as part of a "deliberate and methodical approach" of showing in front of "one solitary audience at any given time." It also was said the film would "not become available on DVD, on-demand, or streaming platforms." Perhaps the folks at Neon were just big fans of the Unstreamable column and wanted to really commit to putting that into action.

Memoria
Such plans were supposed to start in New York and move from there. They have since expanded to have more locations at the same time following criticism that the rollout would limit who could experience it. Some expressed support for its commitment to the theatrical experience—New York Times film critic A.O. Scott argued in his piece "Is Moviegoing Undemocratic" that "there is something beautiful, even utopian in the idea that another way of looking is possible."

With all that in mind, it is wonderful to finally see this film get a release that maintains the value of experiencing it in-person but with a wider reach than before. Having seen it twice now, regrettably from the confines of my home, I wish I could have experienced it for the first time on the big screen in a theater. This is because it's a film unbound by its nonlinear story. It's about the sensory experience of sound and memory that haunts Tilda Swinton's Jessica, who wakes up one night after hearing "a rumble from the core of the Earth."

Any other details about how this all unfolds you should experience yourself—with an open mind and a willingness to give yourself over to the frequency of the film. The way Weerasethakul weaves emotion through impressionistic and transgressive presentation couldn't be more masterful. This was true in his other films, such as the unconventional ghost story Uncle Boonmee Who Can Recall His Past Lives, the elusive Mekong Hotel, the humid and sexy Tropical Malady, and the surreal Cemetery of Splendor. All of these are also worth checking out.

If any of this sounds intimidating, don't let that deter you. You don't need to have seen anything previously made by Weerasethakul to find value here. The experience is relaxing—I felt a deep sense of care and confidence in every frame. Mysterious and dreamlike, it dug its way deeper into my subconscious the longer I spent with it. Even moments that seem disconnected, like when we see an extended musical performance in a room that Jessica pokes her head into, feel so alive that it's easy to get swept up.

As to whether the film offers any revelations about the recurring sound that is central to the story, that's open to interpretation. (Weerasethakul delightfully seems to turn the question into a cosmic joke.) In the end, it's a film worth seeking out, not just because it's a gift to get to see it finally but because you deserve to experience it with all of its idiosyncrasies on full display. 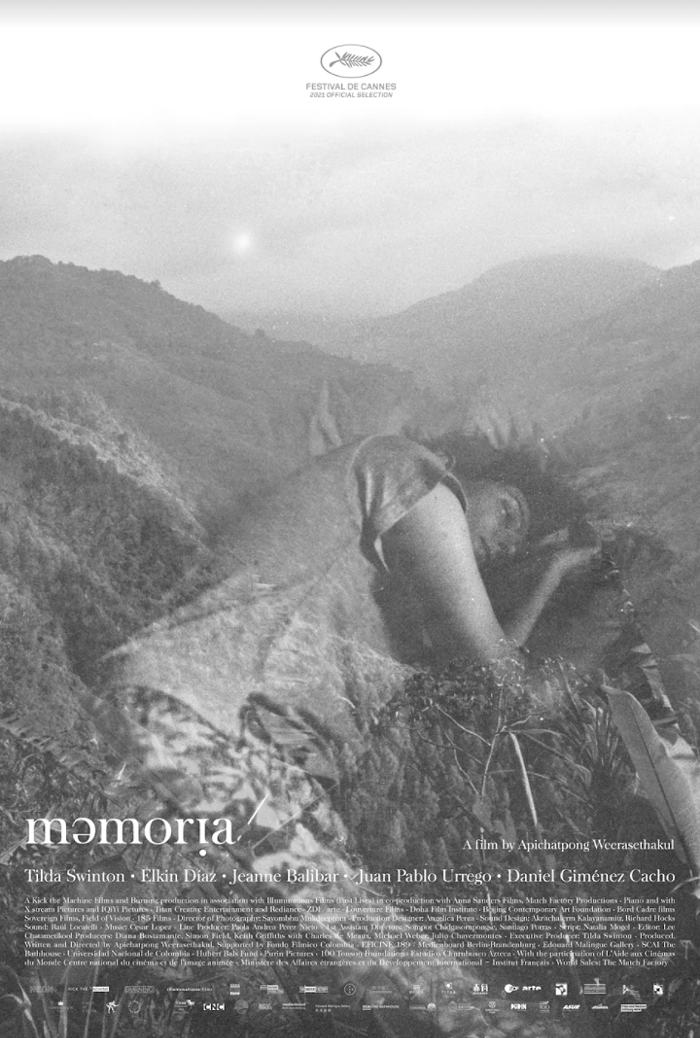 Memoria
You can watch Memoria starting April 1 at the SIFF Cinema Egyptian and starting April 20 at the Northwest Film Forum.
Comments 1
Tags: Film/TV
The Stranger depends on your continuing support to provide articles like this one. In return, we pledge our ongoing commitment to truthful, progressive journalism and serving our community. So if you’re able, please consider a small recurring contribution. Thank you—you are appreciated!
CONTRIBUTE NOW