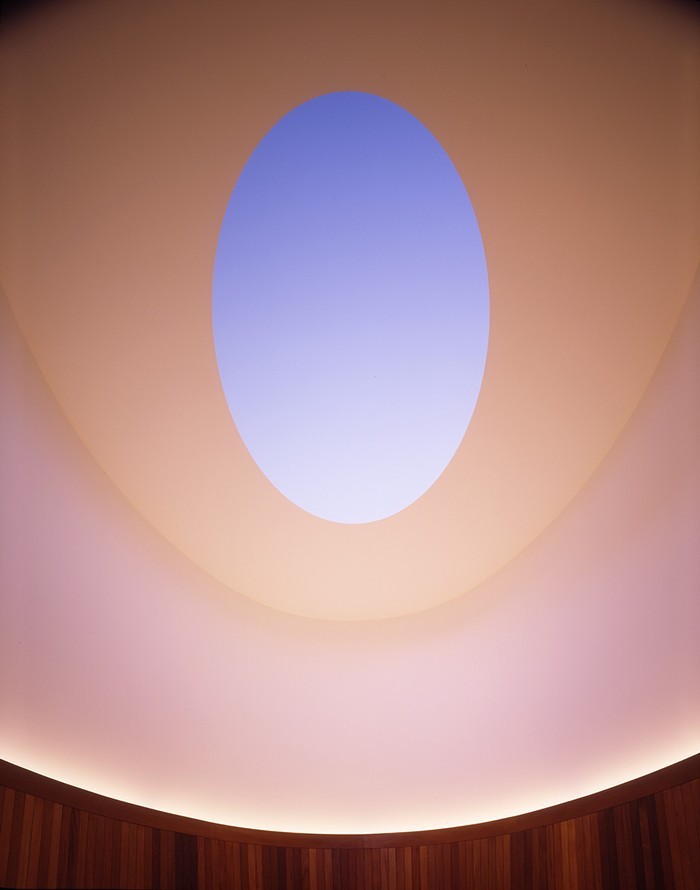 We last wrote about Seattle's Turrell Skyspace in 2019, and we're re-upping that writing today for two reasons. First: in honor of today's weather, which kisses 70 degrees. Second: to raise attention about a 35-minute tour happening at The Henry on Friday centered around this piece. Here's a view of the ceiling from the bench where you sit. The blue oval is sky. Courtesy The Henry and Lara Swimmer
Seattle has a James Turrell Skyspace, a chamber with an aperture in the ceiling that views the sky. The installation is at Henry Art Gallery, connected to the rest of the museum by a small footbridge.

It is called Light Reign and was completed in 2003. Enter the space on a sunny day and you will find it shady inside, with seating along the inner circular walls. Find a spot to sit and look up at the ceiling, with an oval shape in its center. It contains the sky, which is either gray or white if the day is cloudy, or pure blue if it is clear. If it's softly sprinkling, you may see a light rain coming through the hole (turning the title of the piece into a play on words). It's best when the sky is blue.

The whole purpose of this work is to spend a quiet moment or two with light—the foundation of life itself.

For life to make the leap from the microscopic realm to the macroscopic one, oxygen is needed. Without oxygen, a very nasty element, the only living beings on this planet would be the ones you can see with a microscope. (There would be no humans to create or operate the microscope, however.) For a number of significant reasons, all big things need oxygen to be big.

And what does light have to do with oxygen? This gas makes up about 20 percent of the atmosphere because of the long, long history of photosynthetic bacteria. These organisms, which are found in watery places and in leaves, do not eat. They produce their own food by transforming light into biochemical energy. This trick is one of the niftiest achievements of life. We call it photosynthesis, the process of capturing beams of light to break the very strong bonds that form water. The waste in this process is called oxygen.

The age of the sun, the main source of light, is roughly 4.6 billion years. It formed from a cloud of gas and dust ejected from an exploding star (supernova). The matter that did not end up in the sun became the planets and other objects in the solar system. One of these planets is, of course, ours. It takes photons from the surface of the star eight minutes and 20 seconds to reach us. Photons, the particles of light departing the surface of the sun, fly through millions of miles of freezing space. Some of these photons enter Light Reign on a bright spring day.

This is what you contemplate inside Light Reign. It is a simple (and, in some sense, embarrassingly obvious) temple devoted to exactly what makes life big. The light released by the nuclear reactor in the sky is transformed into food by photosynthesis in leaves, and the element this process releases into the air, oxygen, we inhale to cook the food in our power-hungry cells.

The energy that passes the oval window in Light Reign is displayed for a spiritual effect. But there is nothing supernatural or sacred here. We have the deepest feelings for light because it powers the processes that result in the wine we drink, the books we read, the park-bench kisses we enjoy on Seattle's sun-filled days.

Take a tour of Seattle's James Turrell Skyspace at The Henry on Friday.