Poorna Jagannathan and Casey Thomas Brown in Megan Griffiths' new film, I'll Show You Mine, premiering at SIFF 2022. SIFF/I'll Show You Mine
Commenting on Washington's recent investment in the state's film incentive program, Seattle filmmaker Megan Griffiths told us that the state's filmmaking industry is "in such a better position today than we were even two months ago."

"Build our incentive further than it is right now and watch the ripple effect," she dared.

We sat down (over Zoom) and talked with Griffiths (of Room 104, Sadie, and lots more) in anticipation of her newest film, I'll Show You Mine, having its world premiere at this year's Seattle International Film Festival. Shot over seven days, the film centers on a feminist author named Priya (Poorna Jagannathan) and a pansexual former model (Casey Thomas Brown) as they spend a weekend discussing a potential book. This casual setting quickly evolves as the two dig into past traumas. It's an unsettling but very committed drama. 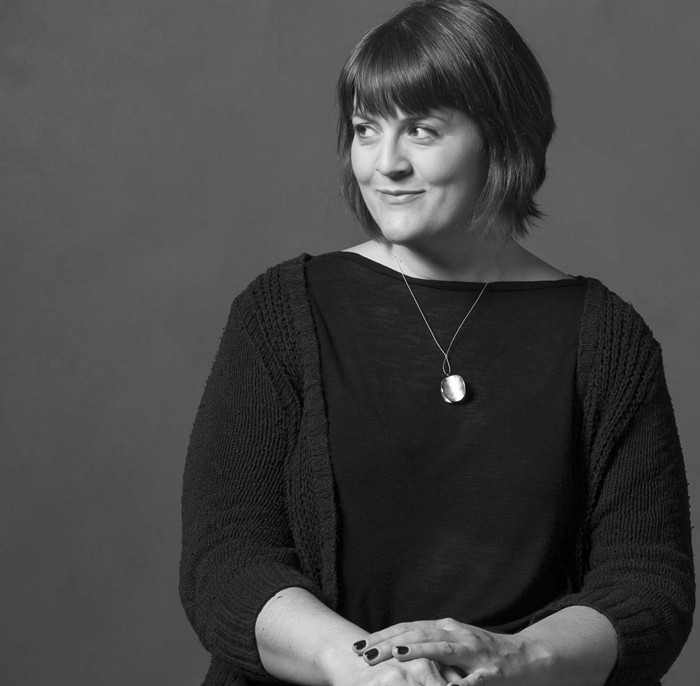 That's Megan. Courtesy Griffiths | Photo by Hayley Young
Before the film's premiere, we chatted with Griffiths about her work, how she approaches storytelling, and what the future of production in Washington state looks like. We've pruned this interview for length and clarity.

When it comes to I'll Show You Mine, a great title for the film, what drew you to this story?

I was drawn to the story because, for one thing, the script was excellent. It really captured an element of the conversation going on in our lives right now, in this world and this time, about identity and how people express themselves and how accepted that is or not accepted. This felt like an avenue to explore that while, at the same time, I was able to explore trauma and how it plays out over the rest of our lives.

My mom was a social worker and did a lot of work with kids who were survivors of abuse. That's just something that's always been interesting to me, to explore what the effects of trauma are. In this case, it was interesting to do that with characters who were also dealing with conversations around sexuality.

You said you shot this over seven days, but then there's the editing. In talking with filmmakers lately, they've said they collaboratively edited over Zoom. That kind of sounds like a nightmare but also a fascinating creative experience. What was your process like editing this film, and did you have to do so remotely?

Well, I'm always incredibly hands-on editing-wise. I've worked with the same editor for the last four features, including the two I just did, and it's Celia Beasley, who is Seattle-based. She was working while we were working on set, so she got started without me. Then I came in and we continued together.

I've done some remote editing, usually with some sort of screen sharing application and then Zoom just as the way we're talking to each other. It has come a long way. The pandemic really hastened the development of that stuff—I'd been in a position in pre-pandemic times where I had to do remote editing, and it was not nearly where it is now. In this case, I didn't do that. We were in-person for everything except for a lot of prep was over Zoom with the acting rehearsals, meetings, and that sort of pre-production.

You mentioned working with Seattle-based people, and being from Seattle, you have frequently advocated for more film production in the state. Considering the recent film incentive increase in Washington, what's your outlook on the future of local filmmaking?

We are in such a better position today than we were even two months ago. The changes that are happening are so exciting. The fact that there is a sound stage being developed and hopefully launched and then the incentive growing in the way that it just grew. We have a ways to go before we are truly competitive in the way that we could draw the many, many productions that a place like Atlanta might draw. We've still come leaps and bounds.

Now we are a place that could support an ongoing series. That would be really sustainable work for a lot of people, and it potentially would allow me to work at home more often—which I like. [Laughs] I travel all the time for the TV work that I do. It's really exciting to think about where we could go.

I just hope that the legislators and the people who are involved in the progress that we've just made are able to see how much that helps and what kind of return we get in our creative economy. Then go even further with it, build our incentive further than it is right now and watch the ripple effect. But the first domino has fallen, maybe the first two.

Shifting back to your film: There's a growing conversation around the importance of intimacy coordinators and resources on set for actors. I know this film wouldn't fall directly under that as there aren't any "intimate" scenes, but this story has rather heavy stuff. What was the set environment like in regards to these more serious topics?

I'm such a big supporter of the movement toward intimacy coordinators. When that started popping up five or six years ago, it was a moment of 'why hasn't this always been a thing?' We had one on my film Year of the Fox that we just shot here. On I'll Show You Mine, we had so few crew members. It was such an intimate environment on this production. There were 15 or fewer people on set.

Mainly it was a process of the actors and I doing a lot of trust-building between the three of us over the course of the prep period and these early Zooms. It does deal with very intense conversations and it felt like there was comfort and trust that was established in that way. The actors were such a huge part of creating that environment and only contributing what they were 100 percent comfortable with. Not only in that moment, but having it exist in the movie. They've both seen it and they're both excited to talk about these themes and topics now that it's getting released. So we didn't have an intimacy coordinator on this production but it was definitely something we were taking really seriously and not trying to dig into anyone's trauma and leave them scarred or anything.

When it comes to the animation that broke the film into chapters, was that baked in? Did you have the set points of where you were going to have these interludes?

Yeah, we did. We always had the comic chapter breaks written in. They were part of the script and what the panels looked like were written in. The animation was a little bit more organic. There were certainly moments where it existed in the script and a lot of that was because of the fact that we knew it was going to be such a contained shooting environment. It allowed moments of opening it up. It also allowed for an exploration of memory in this abstract way, which is how traumatic memory works a lot of the time.

Have you ever used animation like this before in projects you've worked on?

No, this was sort of my first foray into animation. I've worked with Neely Goniodsky, a local Seattle animator, who is incredible and I love how emotionally impactful her work is. It's actually still my screensaver on my computer all this time later. [laughs] It's like a frame of the sneeze moment in the first flashback animation. I just think her work is so stunning. I find it really moving. That was a huge part of the process and her style of how things look and move and feel. Then there were the comic panels done separately by nonbinary artist Jem Milton from Glasgow, Scotland that we were connected with via someone in Portland. That was an experience of digging into what was written and finding ways to subvert things or be more inclusive in those drawings. It was fun to have that whole other layer to play with.

It really was a team of people from all over.

It brings me back to working on a film like Your Sister's Sister, where we had such an intimate, small team. It was just very organic in the way that production was run by Lynn Shelton, who this movie is dedicated to. There are a lot of people who worked on this who worked on that movie or other productions with Lynn. So I feel like we were all thinking of the way those productions worked and how invested we felt when a part of them.

You mentioned Lynn, and while that was a devastating loss to those who knew her films, you knew her as a person. I wanted to express my condolences and ask how you've carried on her legacy with the grant in her name?

Yeah, the grant is through the Northwest Film Forum, and that came about because of Mark Duplass reaching out to just say, 'what can we do that's ongoing to support people in the way Lynn would have liked?' We came up with the idea of this grant that specifically supports women who haven't had an opportunity to make a feature who are 39 and older. That was because that was when Lynn made her first feature, We Go Way Back, which was where we first met. We just thought it would be a really good tribute to her. Now it's in its third year and we're trying to make sure it's as inclusive as Lynn would have wanted it to be. It's really beautiful in my mind. There are just so many women and nonbinary filmmakers who have stories to tell who haven't had those opportunities. It's been amazingly rewarding to do that.

Obviously both of your works are distinct visions, but for much of this most recent film, I was thinking of Lynn's film Humpday. Both offer humorous observations that can quickly and seamlessly morph into more serious reflections in messy ways.

Absolutely, I totally see the comparison. I wish I could show the movie to her. I feel like she would have given the best feedback on this project because we were constantly showing each other our work. It was nice to be able to take this approach to a project. It's not usually the way I work. I don't do a lot of very small, improvy projects and this one just felt so good to do it.