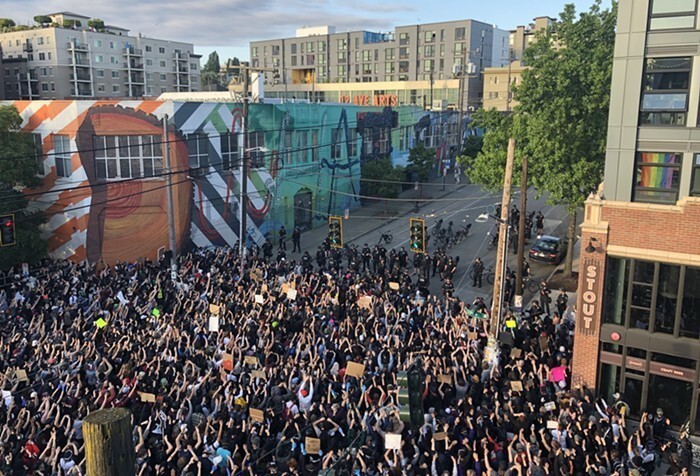 “There’s no representation for people who have experienced police brutality, who have lost a family member, or for the protesters who the cops tear-gassed,” said Howard Gale, a regular public attendee of the commission meetings. RS
On Thursday, the Seattle Human Rights Commission (SHRC) voted to apply for amicus curiae status with the federal court overseeing the consent decree. Amicus status, or friend-of-the-court status, would allow the SHRC to offer information or arguments that Judge James Robart may find useful when making his rulings related to the Seattle Police Department’s behavior.

The SHRC secured a pro bono lawyer to help with the application process, but hiring future lawyers to provide information to the judge will cost money, perhaps $30,000 to $100,000 a year, according to preliminary estimates.

An agency doesn’t commit to the long and expensive work of applying for amicus status on a whim, especially when the Community Police Commission (CPC) already holds this power and ostensibly aims to lend a critical eye to police conduct. Although CPC leadership said in a statement that they welcome SHRC in its engagement with police accountability and look forward to working together, the SHRC doesn’t want amicus status to collaborate with CPC. According to Commissioner Allan Nyaribo, many community members feel as if the CPC has failed to hold cops accountable, and so the SHRC commissioners felt compelled to step in and represent the community.

“There’s no representation for people who have experienced police brutality, who have lost a family member, or for the protesters who the cops tear-gassed,” said Howard Gale, a regular “public attendee” of the SHRC meetings and a frequent public commenter.

During the SHRC’s meeting last week, Commissioner Tyrone Grandison said the commission had heard many complaints about the CPC from community members over the years. After all, SPD killed more people in the 10 years under federal oversight than in the ten years prior, according to the Officer Involved Shootings dashboard.

The city made no fanfare of the SHRC’s move to seek amicus status. Even Councilmember Tammy Morales, who used to be a commissioner for the agency, did not feel informed enough to provide an official statement on the matter.

City leadership has nearly universally supported the CPC for a decade. In 2012, then Councilmember Bruce Harrell sponsored a bill to create the CPC as mandated under the newly minted consent decree. Harrell did not respond to my request for comment. In 2017, the council, including current Councilmembers Lisa Herbold, Debra Juarez, and Kshama Sawant, voted unanimously to make the CPC a permanent fixture of the city’s police accountability infrastructure.

Amid criticism of the CPC, Herbold held to her original support of the commission, saying she believes that the CPC is “fulfilling their obligations under amicus status.”

In an email, Herbold and her office referenced the CPC’s recent work to hold SPD to account: A letter concerning the omission of the levels of use of force in the Crisis Intervention Open data, a second letter urging SPD to “consider what it means to achieve true accountability” after the news broke about the Proud Boy Ruse in 2020, and lastly the Seattle Police Monitor’s semi-annual 2021 report. Herbold also highlighted the CPC’s recommendations tracker. The commission has made 43 recommendations to SPD since March of 2018. SPD “concurred” with 15 of those and has implemented four so far.

Herbold also noted that the SHRC does not need amicus status to provide feedback to the monitor’s preliminary assessments, which summarizes police performance under the consent decree. I asked SHRC if it had submitted feedback in the past and will update if the commission responds.

While Herbold went to bat for the CPC, the CPC pinned its shortcomings on the council. In an emailed statement, the CPC said the 2017 legislation that made the commission permanent also made it incredibly weak, mostly because, as evident from the recommendation tracker, SPD does not have to listen to the CPC. Further, the 2018 Seattle Police Officer’s Guild (SPOG) contract undermined the 2017 legislation, rolling back many police reforms.