Slog AM: Worker Complaint Filed Against Nintendo, Student Debt Cancelled for 40,000 Borrowers, Today Is the Best Day to Smoke Pot 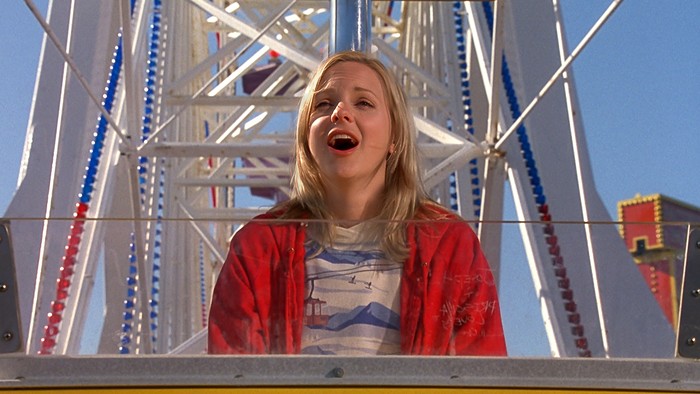 Have you seen Gregg Araki's Smiley Face? It's one of the best stoner films in existence. Courtesy of First Look International
Happy 4/20, betches: After Pride, Weed Day is truly one of my favorite holidays. I can't wait to clock off work and immediately take a massive bong rip that will scorch my throat causing me to cough and briefly convince me that I have COVID. These are some mighty paranoid times for certain kinds of stoners! For those who observe, I wish you a Merry 4/20. I hope no one is hogging your favorite smoke spot, and that you get a good deal on some bud.
Sponsored

And if you need something to watch after you finish Smiley Face: Might I suggest Juzo Itami's ramen epic, Tampopo? As I've written before, never has a bowl of soup been filmed so lovingly. The way the oil gleams off the murky broth! How the succulent slices of pork are perched almost suggestively on top of each other! And, oh God, the slurping! As a perpetually hungry stoner, watching the characters in Tampopo eat bowl after bowl of delicious ramen sort of sounds like torture, but somehow it’s not. If anything, the visuals satiate the stomach—your eyes are eating here:

In a last bit of weed news: The Washington State Liquor and Cannabis Board has clarified a rule around pot shops' use of cashless transactions, reports CHS Blog. Though options are "limited" due to weed still being classified as a Schedule 1 Controlled Substance, pot stores are allowed to conduct transactions via fintech such as POSaBIT or apps like CanPay. The clarification comes at a time when several pot stores have been robbed due to the amount of cash they keep on site. No more ATM fees, please.

The government just canceled student loan debt for 40,000 borrowers: And further provided aid to 3.6 million more, reports Reuters. The measure comes after an NPR report revealed that the government "badly mismanaged" loan agreements it made to some low-income borrowers and public servants who made regular payments for 20 to 25 years. Cancelling 40,000 federal student loans that they were basically already planning to cancel is a great warmup. Now the Biden administration should do it for every single person who is currently paying off student debt. It's the right thing to do.

An anonymous worker filed a labor complaint against Redmond-based Nintendo and one of its staffing agencies, Aston Carter: The complainant alleges "coercive statements, coercive actions, discharge, and concerted activities," reports GeekWire. The rest of the details of the complaint have not yet been made available, but GeekWire notes that this complaint is in line with "recent trends" of labor activity in the video game sector, with a greater push towards game-worker unionization. Right on.

And in New Jersey: The Diocese of Camden is forking over $87.5 million "to settle claims made by hundreds of people who accused clergy members of sexually abusing them," reports the New York Times. It's one of the largest settlements involving the Catholic Church in the U.S., and lawyers say the ultimate payout could be "substantially higher."

Ok, remember that giant-ass house boat on Lake Union that went up for sale last year? Well it sold—for $3.6 million. According to the Seattle P.I., that number "is one of the highest prices for a floating home yet recorded in the Seattle metro," but it's not quite as high as the original $3.75 million asking price. Even millionaires are feeling the effects of inflation!

Florida Gov. Ron DeSantis is on a roll: Annoyed at Disney's feeble criticism of the state's "Don't Say Gay" bill, DeSantis has asked Florida state legislators to consider terminating Disney World's "self-governing privileges" in the Orlando area, reports the New York Times. Apparently, since 1967 Disney World has been allowed to function essentially as "its own municipal government." This concept of giving a private corporation the power to road build is mind-boggling. What a country.

Ultimatum expires in Ukraine: Russia issued an ultimatum to Ukrainian troops in Mariupol, demanding that they surrender or die, reports Reuters. As of Wednesday afternoon, there has been no mass surrender and there are reports of a Ukrainian commander saying his forces could hold out for only days or hours. And currently, the United Nations estimates there are over 5 million Ukrainian refugees, "Europe’s biggest refugee crisis since World War II."

Things aren't looking great for CNN+: According to Axios, Warner Bros. Discovery has "suspended all external marketing spend for CNN+ and has laid off CNN's longtime chief financial officer" following disappointing subscription numbers. Do you subscribe to CNN+? Do you like it? Let me know in the comments.

Weather break! Looks like we're in for some rain this afternoon and evening. Time to get cozy after yesterday's brilliant spring sun.

A little sun this AM but rain spreads up from the south this afternoon. A pause overnight tonight but more steady rain for the Thu AM commute turning to showers. Partly sunny with only a couple showers Fri. Sun and warmer for the weekend but rain returns Sunday night. #k5weather pic.twitter.com/qKb8nD0IQT
— Rich Marriott (@rtmarriott) April 20, 2022

Shooting in Chinatown-International District: Just after midnight, police responded to reports of a shooting and found a 23-year-old man on 4th Ave S and S Main St with a gunshot wound. Police say the shooting followed "an altercation between several people," reports KOMO. The victim died at the scene, and the Seattle Police Department is now conducting a homicide investigation.

Lt. Governor Denny Heck wants to up state legislator pay: Following a wave of prominent legislators of color stepping down from their positions partly due to the underpaid nature of the job, Heck says he wants to raise those salaries "materially," reports KING 5. The position is technically only part-time, but it's increasingly become a full-time endeavor for many folks. And a better salary, says Heck, could attract more diverse state reps and senators. The raise would be on top of a 1% raise scheduled for July 1, and it does not include Heck's salary of $119,353 a year.

This headline is basically illegible to me: "Robbie Ray backed by 3 homers as Mariners beat Rangers 6-2," reads a KING 5 headline. Congrats to the Mariners, though.

I giggled at this for an unreasonable amount of time: The power of weed.

For your listening pleasure: I've probably posted this before, but here's Ted Lucas' "It's So Nice to Get Stoned."