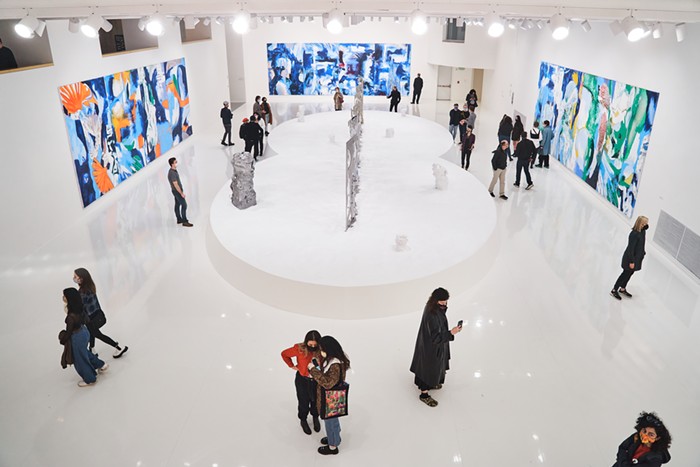 The show's name suggests sexual and geographic reproduction, both gratifying and destructive all at once. JONATHAN VANDERWEIT/COURTESY OF HENRY ART GALLERY
On a recent bright afternoon at the Henry, sunlight poured into the lower gallery and onto Donna Huanca's exhibition, Magma Slit. The sunbeams bounced around the all-white room, making the four massive color-soaked paintings on its walls appear even brighter.

As I did laps around the gallery, I lost track of time. I tried to absorb a particular shade of pink in one corner, sized myself up against some body rubbings in another, and listened to bird trills in a curated soundscape section of the show. Far from being alienating, the gallery's white walls and floor felt comforting.

The commissioned exhibition by the Berlin-based Bolivian-American artist aims to dissect big concepts, things like decay, growth, and the passage of time. It does this by enveloping viewers in a visual, sonic, and olfactory space. Exhibiting during a very pandemic moment, where time seems as slippery as ever and the balance of life and death feels deeply out of whack, Magma Slit transports viewers to a realm where comprehension of these things (time, growth, decay) seems briefly attainable. 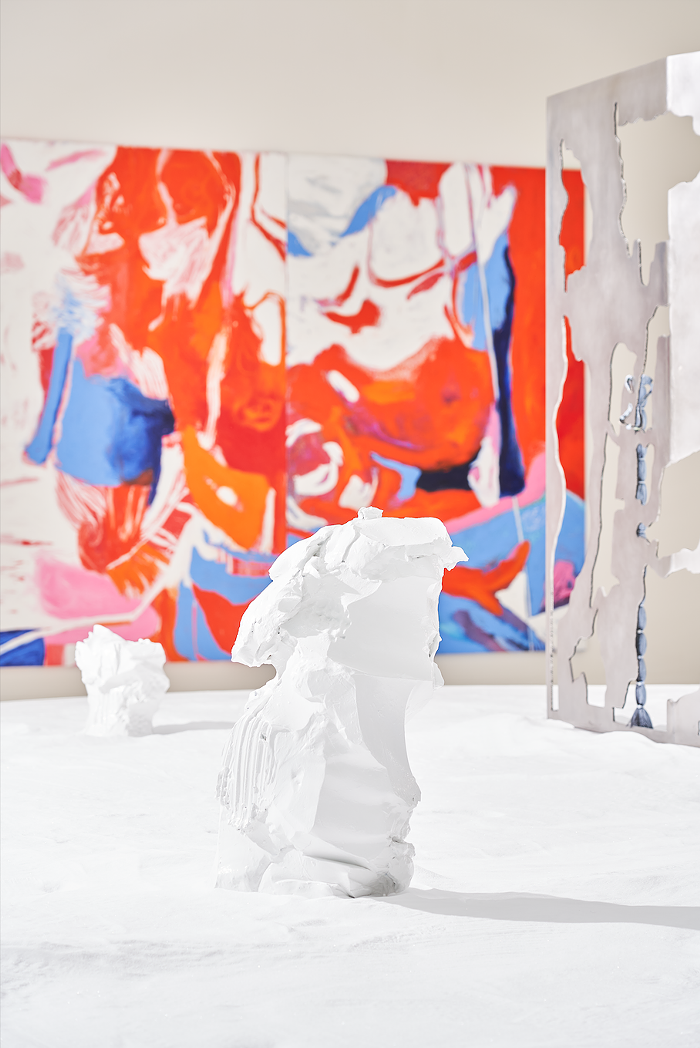 The colors of summer. Jonathan Vanderweit/Courtesy of Henry Art Gallery
Figurative and abstract bodies play a big part in Huanca's work, and she routinely collaborates with dancers to compose her sculptures and paintings. The four giant paintings on display here are no different. They're named after the four seasons and placed on walls corresponding with the four cardinal directions. The paintings' first layers are digitally printed photographs, collaged together from various elements of her work—images of painted skin, collaborators, and other sculpture works. She then painted over the photos with frenzied gestures and colors related to each season.

For instance, an outline of eyes is just barely visible underneath the pinks and oranges of summer in one painting. In another painting, cracked and dried paint depicting a fleshy bit of arm snuggles between the cheery greens, blues, and whites of spring. These murals—which will rotate inside the gallery—bind the season cycle to our decaying bodies, acknowledging the possibilities of both death and regeneration. I got teary-eyed thinking about it!

"It takes some maneuvering to really see yourself in the sculpture. Once you do, there's a magnificent layering effect."

Huanca also worked with Los Angeles-based dancer Kim Thompson to create purple body rubbings, which appear on a rounded-out corner of the gallery and inside the Henry's strange little turret. These rubbings situate the human body among the show's giant murals, adding a bodily intimacy. Within the turret, Huanca also curated an olfactory element, though the scent machine wasn't quite working during my visit. I'm told the smell is earthy, like leather.

Huanca also made a four-chapter “sonic collage” that plays throughout the gallery. It’s a mishmash of field recordings and sounds of nature, adding to the exhibition's immersive environment. JONATHAN VANDERWEIT/COURTESY OF HENRY ART GALLERY
Huanca constructed Magma Slit around an ovoid stage filled with 15 tons of white sand. Depending on your angle, you could read this stage as an infinity symbol or a cell splitting itself in two. And across the middle of this stage is the "Puerta De Trenzas," an assemblage of six laser-cut reflective steel sheets adorned with synthetic braids. Most notable are the organic-looking cutouts in the sheets, taken from silhouette drawings Huanca made of her friends at various parties. I loved how even this cold hard material contained the echoes of living, breathing flesh.

Because each steel sheet is slightly bent in the center, standing straight in front of one can be a little disorienting—your reflection doesn't immediately appear. It takes some maneuvering to really see yourself in the sculpture. Once you do, there's a magnificent layering effect; the mirror reflects you and the painting behind you, and the sheet's cutouts show the paintings in front of you. The result is a dizzying yet thrilling composition that mishmashes different seasons, different selves on top of one another, with no one viewing point like the other.

The metal screen in the middle of the exhibition creates these interesting viewing opportunities. Jonathan Vanderweit/Courtesy of Henry Art Gallery
Also residing on this ovoid sand island is a type of "extraterrestrial archeology." When placed on sand, these extraterrestrial fragments resemble sailing stones that groove trails on the desert floor, guided by wind and other geographic processes. With some imagination, you could see these fragments as being dropped from the moon, or bodies from another plane. Huanca created them by punching, kicking, and tearing at giant clay pieces, then casting the pieces in acrylic resin or aluminum. You can see her shoe marks and knuckle carvings if you get up close.

Walking through the space, I was reminded of In Crystallized Time, the recent Anthony White-curated show at Museum of Museums with its shiny mirrored flooring. Though ICT and Magma Slit tackle wildly divergent themes, a common thread is a need to view art in a placeless, controlled space. Maybe it's the pandemic's vibes, but this presentational approach really works for me right now. And in Magma Slit, Huanca has constructed a probing environment that answers as much as it questions. Go and ponder.

Donna Huanca's Magma Slit is up at Henry Art Gallery through February 5, 2023.