Ultimately filmed on Whidbey Island, the initial plan for filmmakers Samantha Soule and Daniel Talbott was to shoot at the Great Lakes in Michigan. Speaking over Zoom, they shared how it seemed like their production might not pan out. Thankfully, for us and them, the film was able to find new life by making its way across the country.

"We reached out to Amy Lillard at Washington Filmworks and were like, 'This is really last minute, could you take us?' They were unreal," Soule said. "Washington threw their arms open for us."

"Washington was an angel. We thought this was going to be dead the minute we lost Michigan," Talbott said with a laugh. "I am a West Coast kid. I lived in Washington, I lived in Oregon, I lived in California…Going back to this place and getting to revisit it in this really beautiful way was personally just extraordinary. Getting to find that water again and that ocean again with my chosen family was extraordinary." The filming location in Washington proved to be a fitting emotional destination. Courtesy Seal Tree LLC
"Michigan increasingly felt like where our characters had come from and that big coast of Washington felt like where we wanted to send them," Soule said. "Then fate dealt a hand and some of the original locations fell through. So it was actually like a break in the clouds and a huge opportunity to say, 'Oh my god, we could pick up and pull the circus to go to where the script increasingly wanted to be.'"

It was also the first film lead actor Chris Stack had done in the state. He had just finished working on the upcoming Interview With A Vampire series when I reached him in New Orleans.

"I don't want to say it was a homecoming but a return to a place that I had stomped around thirty years ago," Stack said. "It had changed a lot."

Stack had previously gone to college in Oregon and spent time in Seattle, which instilled this returning with a personal significance that echoes his character's experience.

"A lot of the character's journey that you see is created out of many, many elements that you don't see that are very personal," Stack said. "My having been in the Pacific Northwest so long ago with all of those memories and experience, to then return to this place 25 years later is definitely a baseline." 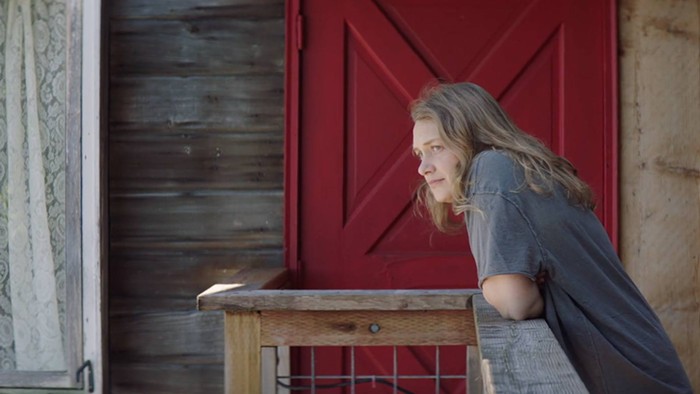 The film screens in-person this Thursday and Friday. Seal Tree LLC
The film, shot over 23 days, eschews typical narrative progression to become a meditation on grief that often dips into nightmare. It centers on Stack's Ian, a man struggling with isolation and grief after losing the woman he loved, Liv, nearly two decades prior. His journey in the film is about how, if at all, he can regain a connection to a future that she is no longer in.

Soule, who also stars in the film as the departed Liv, most recently took on a role in the Netflix limited series Godless. In the show, Soule appeared alongside Merritt Weaver, who now plays her sister, Beth, in this film.

That sense of longtime connection is woven throughout the film. Both Soule and Talbott, credited as co-directors and co-writers, describe themselves as theater kids who became artistic collaborators after they met at Julliard. This first feature film marks the culmination of that long relationship, with an assist from a local source.

"We reached out to Amy Lillard at Washington Filmworks and were like, 'This is really last minute, could you take us?' They were unreal," Soule said. "Washington threw their arms open for us."

Lillard, who is the Executive Director of the non-profit, identified this as the goal of what the organization is and hopes to be in the future. As the steward of Washington's Motion Picture Competitiveness Program, Filmworks works to connect more film productions to state resources and talent. Earlier this year, legislators in Olympia finally increased the program's yearly cap nearly five-fold, to $15 million, after years of activism from the filmmaking community.

"That's what Washington Filmworks does. We are the customer center service center for film in Washington state. When they came to us and were like, 'We're looking for these key locations,' we helped them find some place that they could call home."

"It would be a hard film to try and get a studio exec to sign off on," Soule said. "The fact that we had this window of time and we got lucky with investors who understood and were rooting for us, that's a miracle. That never happens for young filmmakers." 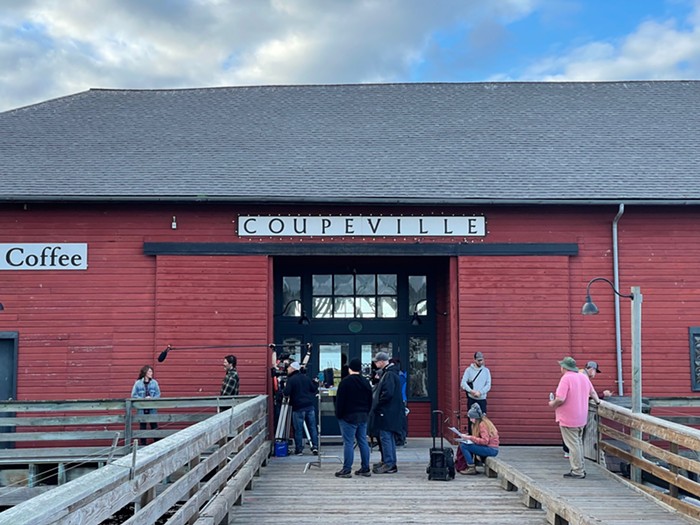 Seal Tree LLC
Things weren't always easy for the production. Many sequences take place on and in the water of Puget Sound—and they had to film them during the state's blistering heatwave. This proved to be okay timing as it motivated people to get into the water.

"By the time we filmed, it was 110 degrees in the shade. Everyone was like 'I'll get in the water!'" Soule said.

But it wasn't all just splashing around—the film's emotional core centers around grief and mourning, something the collaborators said drew out deeply personal reflections.

"Grief is not a linear process. I think it's really disorienting and surprising. There is the classic '7 Stages of Grief,' which I understand, but it's a really convenient way to make it linear. It's just not. In making the movie, it was very liberating in that way, in that I could allow it to be in those moments," Stack said.

"You learn to move on for and with the people that you have lost. You live for those that cannot in a way. That's something I've taken on for myself and the movie, I hope, is an ode to that," Talbott added. 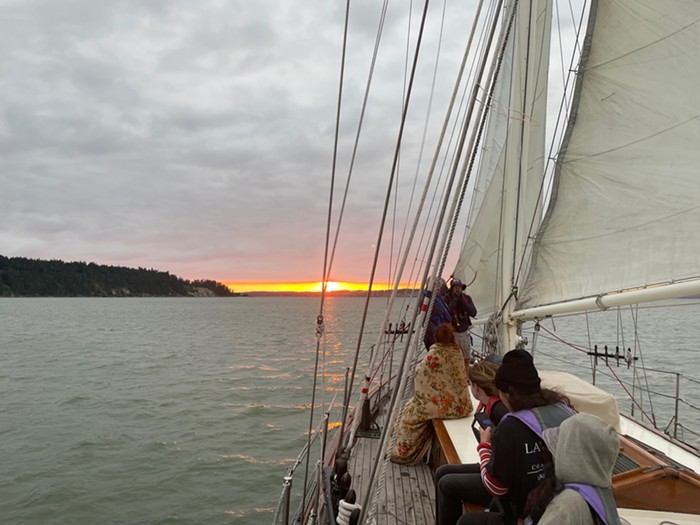 Seal Tree LLC
The team says the experience of shooting the film in the state was an overwhelmingly positive one, leaving them eager to return for another project in the future.

"We are definitely coming back. I've already reached out to almost all of the crew that we've worked with because we just fell in love with these people," Talbott said. "You guys have an extraordinary state and an extraordinary film community. It was magic so yes, we are coming back as soon as we can."

Midday Black Midnight Blue has its premiere tonight, Thursday, April 21, at AMC Pacific Place at 6:30 PM. Directors Samantha Soule and Daniel Talbott, producers Lovell Holder and Addie Johnson Talbott, and actor McCaleb Burnett are scheduled to attend. You can also catch it on Friday, April 22, at AMC Pacific Place and screen it virtually from now until 11:59 pm on April 24.