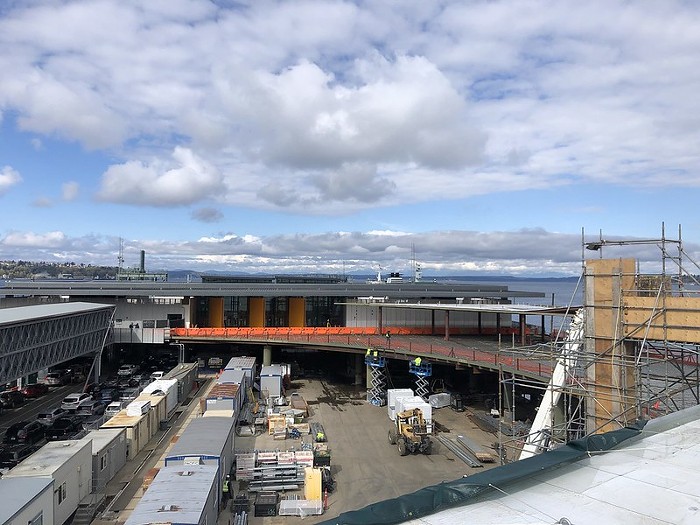 Colman dock: Almost ready! Washington State Ferries
Sweeps are going great, thanks! Someone smashed up a few windows and sprayed graffiti around a Parks Department building this weekend, leaving a message “you sweep, we strike,” likely in reference to the department’s role in pushing encampments from place to place. Bruce Harrell’s ramped up the sweeps, boasting that they’ve “referred more than 300 people to shelter” — though he doesn’t say how many people were able to take advantage of those referrals.
Sponsored

Seattle was just visited by a giant floating toilet bowl. The cruise ship Zuiderdam sailed past Seattle this week, dumping wastewater as it went. Washington’s environmental protections are relatively good compared to other states, but many are just voluntary suggestions, and plenty of gross emissions still find their way into our water.

Today the Zuiderdam is leaving San Diego on it's way along the West Coast eventually all the way to Alaska via Vancouver. I'm putting together a thread as it journeys up to go over the rules on dumping that this ship is subject to!
🧵 pic.twitter.com/nCH3qk5rot
— Anna Barford (@alesliebarford) April 22, 2022

Verizon accidentally made an extremely compelling case for labor unions. Ten years ago, Verizon posted an article intended for business-owners headlined “The cost of a unionized workplace,” which remained on their site for a decade until someone noticed it yesterday and it was yanked. But it lives on in the Wayback machine! “A union in your business probably costs more than you think,” the article begins, going on to list such “costs” and higher wages, better benefits, and more opportunities to move to better jobs. Why not form a union today?

Just a befuddlingly unpleasant attitude. This is a little inside-baseball, but: Erica spotted a new report on police accountability and wrote about it last week; the Seattle Times caught up with her a few days later with an article of their own, but didn’t extend the courtesy of a “as first reported by” link. It’s possible they just didn’t know she’s reported on it before they did, but that’s no reason to respond in this manner. Illuminating to see a journalist who thinks of his profession as comparable to waiting for and obeying instructions from the government.

Erica you don’t ”break” news with a public report. It’s like demanding credit for being the first car through a green light. Nobody cares but you. (PS the AP is a non-profit, member-owned co-op. Are you a member?)
— Mike Carter (@stimesmcarter) April 27, 2022

Hello boats. The new Colman Dock is nearly ready for its closeup — construction has picked back up after the concrete strike and we’re on target for an opening this summer. Check out the progress pics! In other boat news, something went wrong with the Yakima ferry’s anchor yesterday and it may be out of commission for a while, so if you were planning to head to the islands you may need to make new plans.

Seattle Bike Train is back. After taking some time off for the winter, it’s time to hop back on a bike for a nice ride with some friendly faces. Mark your calendar for May 19 — the route will take the group from the ID to Judkins Park to Lake Washington.

This one’s a bit of a head-scratcher. Seattle Central College’s culinary academy has been going strong for 81 years, with lots of high-profile graduates and full enrollment even during the pandemic. So why is a committee recommending that it get shut down?

Pretty lady. This lovely barn owl got into a spot of bother last week but she’s on the mend and nearly ready to return to her important work of eating the mice that have been nibbling the squash in your container garden.

This adult barn owl was rescued by @SeattleParks and @SeattleAnimal personnel last week when it got entangled in kite string in a tree. We treated her with fluids, pain medication, and anti-inflammatories. She suffered no orthopedic issues and will be released soon! pic.twitter.com/FzLqvDFtC5
— PAWS (@PAWStweets) April 27, 2022

Congrats to Shasti Conrad on the Webby nomination. The first chair of King County Democrats who is a woman of color, Shasti was among the team nominated for their work on Lift Every Voice, a 2020 get-out-the-vote project.

Big day for bird news. There's been another sighting of a majestic predator that preys on weak creatures and feeds on rotting carcasses. Not a bad symbol for the country, honestly.

West Seattle: Still a thing. Even though it now takes approximately three years to travel from Downtown to West Seattle, it is still technically a part of our city. Tonight reps from SDOT will meet with the community to talk about the latest transpo headaches: Bridge replacement, light rail, freight lanes. It’s all going down via Zoom.

Look at that smile!!! This adorable pit bull named Tori has caused a little earthquake in my heart.

Tori's fosters were out of town last weekend, so she came back to show everyone what a good girl she is. There were a lot of new smells, but she was kind enough to stop sniffing long enough to show us some tricks and plant a few pittie kisses on folks. https://t.co/iYdoVGSYY6 pic.twitter.com/sbiF90WEqJ
— Seattle Humane (@SeattleHumane) April 27, 2022