The all-ages showcase is all about musicians supporting musicians.

The sisters behind Belltown Bloom. Courtesy Veronica and Valerie Topacio
The flowers are blooming and so is the fest season here in Seattle.
Sponsored

Kicking things off is the second installment of Belltown Bloom, a DIY, all-ages showcase focusing on female and QTBIPOC artists. This year, Belltown Bloom happens at The Crocodile and Belltown Yacht Club on May 6 and 7, presenting around 40 (!!!) local and national artists across four stages. (I've included a full lineup at the bottom of this post. Scroll through to listen to music from featured artists.)

"People on the lineup have really touched my life," says Valerie, who created the festival with her sister as a way to uplift marginalized voices and express a shared love for music in the community. I recently chatted with the Topacio sisters, who have miraculously planned this festival in between focusing on their own music and navigating new motherhood. Below is our conversation, edited for clarity and length.

This is the second Belltown Bloom you guys have done, which is super cool. Were there any new challenges behind this year's festival, especially since it's happening a few years after the last one?

Veronica: This would have been the third one, but the second one got canceled. We tried to take as many people as we could from that lineup and give them the opportunity to perform on this year's lineup as well. We also went back into our artist submissions from previous years. We ask a lot of people and there are some people who can't do it. So there's that challenge in itself.

I think as much as people want to assume the world is back to normal, it's definitely not. And so there's just a lot of uncertainty.

Valerie: Being an all-ages multi-day fest at venues that are predominantly 21 and over is a challenge. But it is a challenge that the Crocodile this year is willing to take on and we're so grateful for that. So we're really just excited to be able to embrace that challenge in itself and see what happens.

As musicians yourselves, who are also performing at the festival, how important is it for Seattle to have an event that highlights diverse local talent, specifically women and people of color?

Veronica: I think that there can never be enough. We just want to create space, more space, for songwriters, storytellers.

Valerie: People on the lineup have really touched my life. For the past couple years, I've been following many of their Instagrams. I'm just also a new mom. I have a 15-month-old, so I don't get to go out to live music a lot during the week like back in the good old days, you know. So I'm really excited to be able to see a lot of these people that I've been following for so long, like Maiah Manser, she's coming out from L.A. I've been such a huge fan of hers for so long, and she is playing the event!

It's cool to follow people's journeys throughout the pandemic, see people tour and do all these things like Nicolle Swims from Black Ends. They just got back from an amazing tour. I would just be watching them, in my bed with my baby, dreading it up on stage. And it's like, “Oh my God, you get to play on Saturday.”

And you know, what's special about this festival, too, is we're inviting all the bands and band members, they all can come for both dates and that's really important to us. We want to be able to celebrate together and just see each other's music. You know, catch a couple of minutes of that set, hop all over and create this kind of buzzing, supportive energy, because that's really what this is all about. It's about communities that are supporting each other. It's about putting each other on.

You're creating a really cool space for a lot of people, with a ton of artists joining you for the weekend! That said, who are you most excited about seeing?

Veronica: Oh, I mean, it's really hard. Alvvays is our favorite band, ever. Honestly, when the Crocodile asked us who we would want to be the dream headliner, we had Alvvays at the top. And they were like, well, there's about a 1% chance they'll say yes. And then they said yes!

But locally, I'm really excited about Claudine Magbag. They're Filipino. They're also a clothes vendor, a vintage seller at [The Fremont Sunday Market]. But that's how we met them. They just dropped an EP called Better Luck Next Time, it's really good. And so we've been listening to that a lot. I'm also really excited for like Black Ends too because they just came back from tour, and Tres Leches, they just came back from tour. Also Falon Sierra. I love her stage performance.

Valerie: Payge Turner. We saw them on The Voice, so that's really cool. And Ariana Deboo. She just assembled her band over the course of the last year. I actually haven't caught a set of hers yet, so I'm really excited to see her in action. And yeah, Tres Leches. There are just so many good bands. Avery Cochrane just came out with a new single too. And the band THEM.

Belltown Bloom takes place May 6 and 7 at the Crocodile and Belltown Yacht Club. Find more events suggested by The Stranger here. 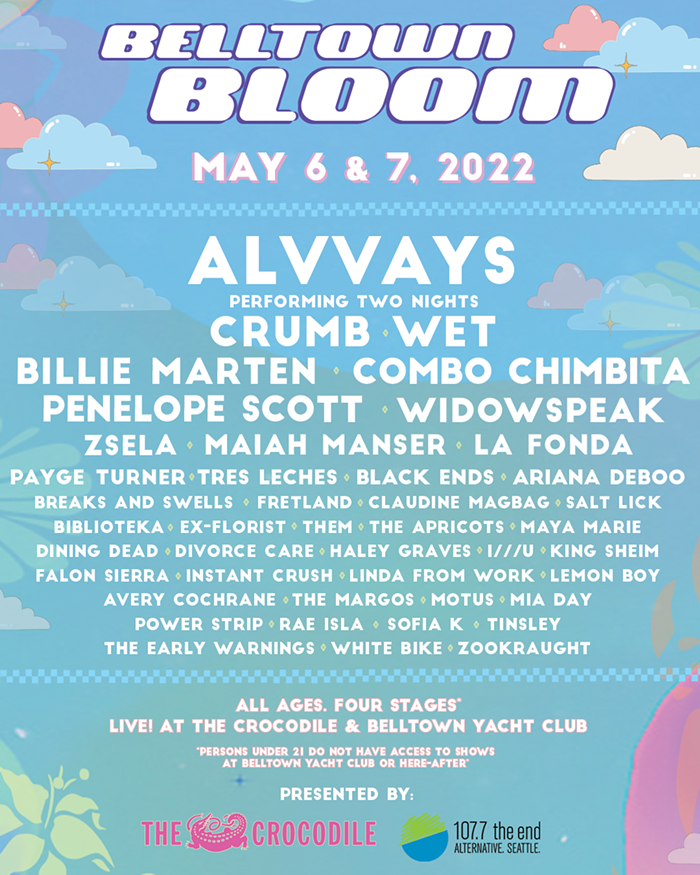 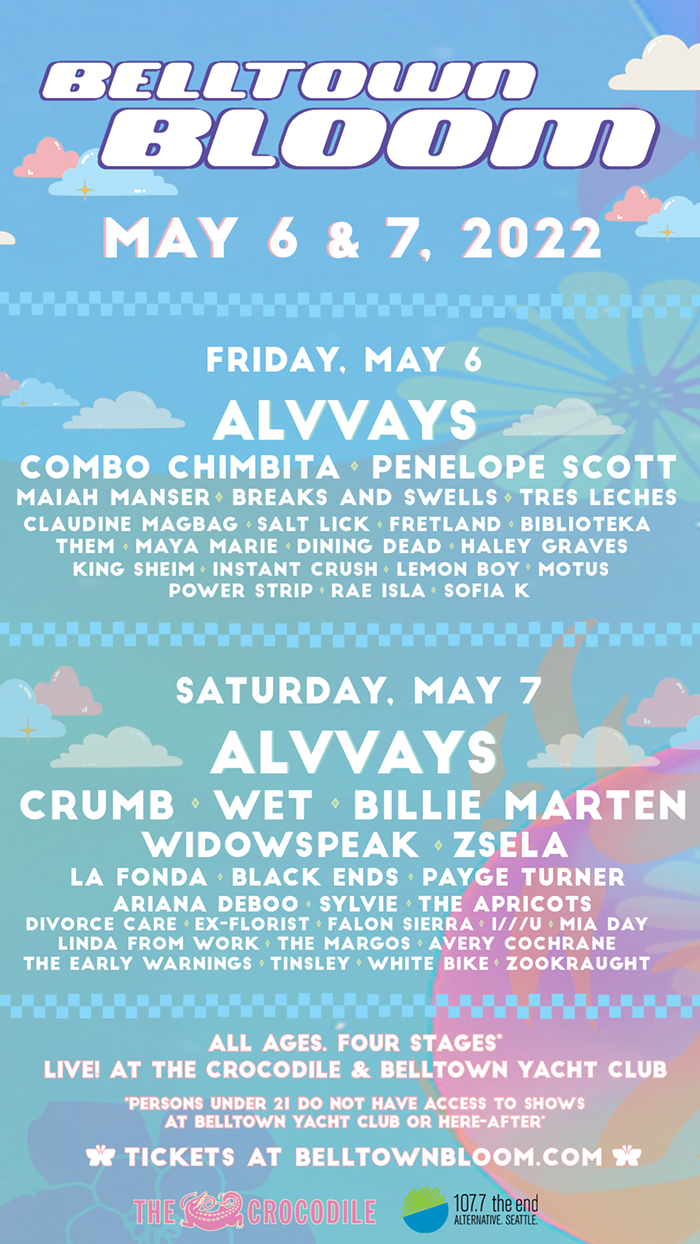 Natalie Vinh is a music journalist from Bellingham. She is the founder of BREAKOUT Magazine, an online publication covering the local Bellingham scene. She also works at the Wild Buffalo House of Music and as a transcription volunteer for KEXP's digital content team.

Natalie Vinh is a music journalist from Bellingham. She is the founder of BREAKOUT Magazine, an online publication covering the local Bellingham scene. She also works at the Wild Buffalo House of Music and as a transcription volunteer for KEXP's digital content team.