His show at Climate Pledge Arena is spectacularly nostalgic. Here's our review.

Witness the most relatable billionaire musician on the planet. Brittne Lunniss
My fear going into Paul McCartney's concert on the second night of his 13-city “Got Back” Tour was that thousands of retirees' screams would drown out the music.

Alas, the crowd was respectful and downright worshipful, and skewed much younger than expected—at least in the section where I was sitting, among the rich folk on the floor level of Climate Pledge Arena. The ex-Beatle and ex-Wing, now about a month away from turning 80 but still lithe and vibrant, had the 17,000-strong audience totally enamored for the performance's 160-minute duration. As far as I know, nobody fainted from the excitement. 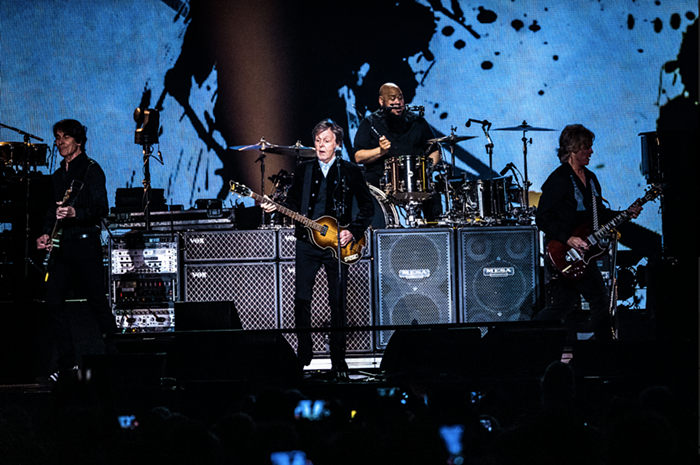 Pleasing 17,000+ fans like it's NBD. Brittne Lunniss
Macca's voice has lost some luster, but his pipes were better than most septuagenarians' in the game and it largely rose to the challenge of his hardest-rocking moments. (Thankfully, guitarist Rusty Anderson, guitarist/bassist Brian Ray, and drummer Abe Laboriel Jr.'s backing vox did much of the heavy lifting.) I, for one, never thought they'd do proto-metal hell-raiser “Helter Skelter” at this late date, but McCartney and his solid band indeed did Charles Manson's fave Fab Four tune proud. It was surprising to hear this shredder during the encore, when Paul's voice already had been through so much. But respect to the man for the potent, late-set 1-2 punch of “Birthday”/“Helter Skelter.”

At age 79 and wealthy beyond comprehension, McCartney could do whatever the hell he wanted and his multitude of fans would greedily eat it up. Yet he mostly played it safe. Which is his right, of course. A musician of his vintage and fame can't be faulted for taking the path of almost-least resistance on a medium-length tour. And, honestly, most of his fans want large helpings of Beatles songs and healthy portions of Wings hits and hold the new solo ones, please and thank you. Even Macca himself acknowledged this before launching into the title track from 2013's New.

“When we do old songs, the place lights up with phones; it's like a constellation. When we do new songs, it's like a black hole.” It was one of a handful of funny lines on the night, and you can't overestimate the charm of the most famous living musician in self-deprecation mode. Still, one could have done with some outliers from McCartney's catalog—perhaps the proto-techno goof “Temporary Secretary,” the percussion-heavy oddity “Kreen-Akrore,” or the Haruomi Hosono-esque exotica of “Secret Friend.” And nothing from Back to the Egg?! Talk about an arrow right through me... From left: Rusty Anderson, Paul McCartney, Abe Laboriel Jr., Brian Ray Brittne Lunniss
Of course, decades of evidence prove that McCartney's crowd-pleasing instincts are nearly unparalleled. Consequently, he doled out 20 Beatles tracks, and they mostly sounded fantastic and faithful to their recorded versions. One could quibble with the selections, most of which were predictable. In a just world, the stilted whimsy of “Being for the Benefit of Mr. Kite!” would never escape the confines of Sgt. Pepper's Lonely Hearts Club Band. If you're going to do a John Lennon number, why in blazes would you go for his bottom-of-the-barrel material? Were “I Am the Walrus” and “And Your Bird Can Sing” unavailable, for some reason? Similarly, one could live a satisfying, peaceful life without ever hearing “Ob La Di, Ob La Da” again.

On the other hand, opening the show with “Can't Buy Me Love” was a genius move, from a purely adrenaline-spurting/scream-inducing viewpoint. (Side note: Paul McCartney actually can buy him love—all of it.) And then there was “You Never Give Me Your Money”—one of many Abbey Road joints on the night. The irony was not lost on those who shelled out three figures for tickets. 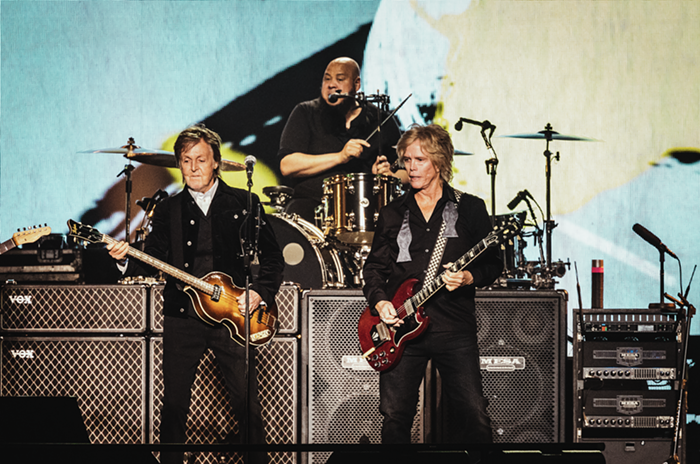 Thank the deity of your choice they didn't do "Ebony and Ivory." Brittne Lunniss
The 34-song set encompassed many phases of McCartney's 60-plus years in show biz and it allowed him to flex on his trademark Hofner bass, psychedelically decked-out electric guitar, acoustic guitar, piano, mandolin, and ukulele. He used the latter to play “Something,” a touching tribute to former bandmate George Harrison, who gifted the instrument to Paul. The group later blew out the beloved standard into a surprisingly funky cell-phone-waver. The visuals—which were on point all night—presented Harrison in many stages of his life and consequently some lumps may have come to some throats.

The set also featured precious footage from Peter Jackson's recent Get Back documentary for “I've Got a Feeling,” in which Lennon's verse flowed seamlessly with McCartney's, and for “Get Back.” And for that real way-back feeling, Paul resurrected the Quarrymen's “In Spite All of the Danger,” prefacing it with an amusing anecdote about the demo they cut in those pre-Beatles days. He did a similar shtick with the Beatles' first single, 1962's “Love Me Do,” relating how nerves forced his voice to quiver in the studio. McCartney may be able to afford to buy Twitter, but he is, at his core, a relatable bloke. 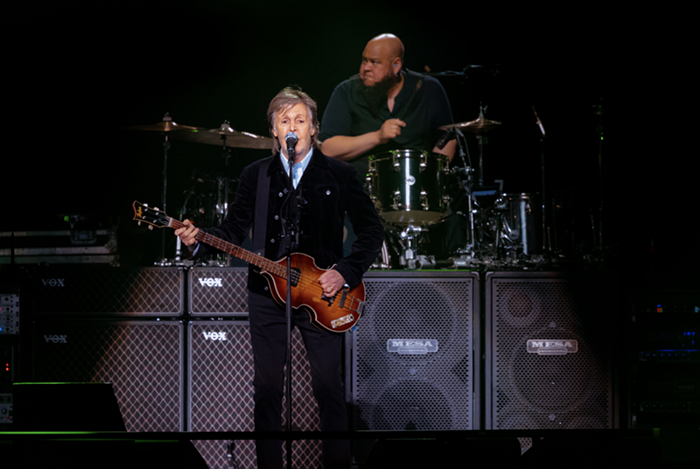 "Can't Buy Me Love"? Oh, that's rich. Brittne Lunniss
The most—or least, given that this is Seattle—surprising tangent of the night was a brief instrumental jam of Jimi Hendrix Experience's “Foxey Lady,” which led into a hilarious Paul story about Jimi's first British show, at which he asked Eric Clapton to tune his guitar. And in a deviation from his nice-guy image, McCartney introduced "Blackbird"—which he played while elevated on a platform about 40 feet high—thus: "How many of you tried to learn 'Blackbird'? [smattering of cheers] Well, you all got it wrong."

Overall, there were too many highlights to detail here and a few lowlights (FOH, "Fuh You"), but, in general, the “Got Back” show (no relation to Sir Mix-A-Lot) is a spectacular nostalgia wallow that's also totally geared for the Instagram generation; the two 20something women next to me must've taken over 100 selfies and videos. 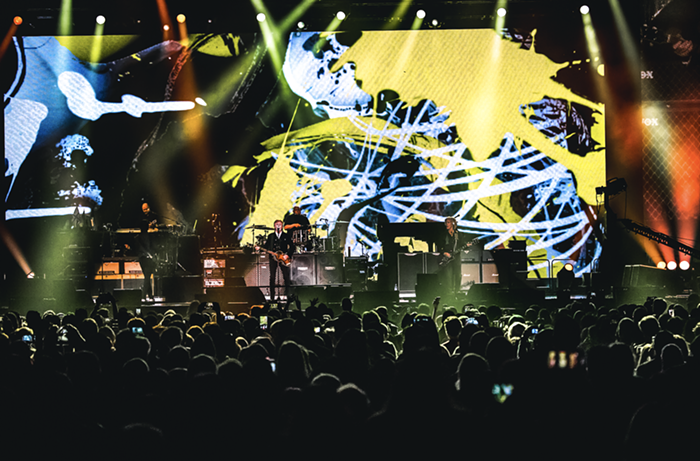 These stunning visuals weren't even in the top 10 of images last night. Brittne Lunniss
During the tumultuous James Bond film theme “Live and Let Die,” amid amazing fireworks, towering flames erupted from the stage and their heat could be felt at least 11 rows back, where I was standing. The explosion at the end almost gave me a heart attack. Macca looked genuinely shell-shocked afterward. Leave it out, guys; it's overkill—almost literally. And the 2001: A Space Odyssey-like corridor graphics backing “Helter Skelter” perfectly matched the song's paranoid vibe. However, the “blooming flowers amid the rubble” scenarios during “Getting Better” struck an awkward note, especially with the Russia-Ukraine war and the leak about the SCOTUS draft to overturn Roe v. Wade surfacing hours before the show. (Maybe Team McCartney hadn't heard about the latter, but still, not to put too fine of a point on it, things ain't exactly getting better.) Blessedly, “Back in the U.S.S.R.” was AWOL.

SETLIST
Can’t Buy Me Love
Junior’s Farm
Letting Go
Got to Get You Into My Life
Come On To Me
Let Me Roll It
[brief instrumental jam of Jimi Hendrix Experience's “Foxey Lady”]
Getting Better
Women and Wives
My Valentine
Nineteen Hundred and Eighty Five
Maybe I’m Amazed
I’ve Just Seen A Face
In Spite of All The Danger
Love Me Do
Dance Tonight
Blackbird
Here Today
New
Lady Madonna
Fuh You
Being For The Benefit of Mr. Kite
Something
Ob La Di, Ob La Da
You Never Give Me Your Money
She Came In Through The Bathroom Window
Get Back
Band On the Run
Let It Be
Live and Let Die
Hey Jude
I’ve Got A Feeling
Birthday
Helter Skelter
Golden Slumbers / Carry That Weight / The End

Paul McCartney performs again on Tuesday at Climate Pledge Arena.
The Stranger depends on your continuing support to provide articles like this one. In return, we pledge our ongoing commitment to truthful, progressive journalism and serving our community. So if you’re able, please consider a small recurring contribution. Thank you—you are appreciated!
CONTRIBUTE NOW