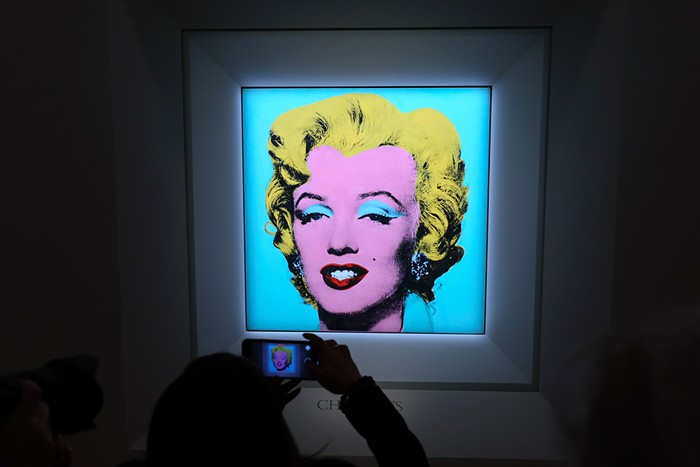 Excess in every way. Dia Dipasupil/Getty
Between Warhol and Kardashian, Marilyn's image just can't catch a break: Yesterday, the Pop Art progenitor's iconic 1964 silk screen of The Seven Year Itch actress sold for $195 million to an unknown buyer at Christie's in New York, reports the New York Times. That price makes it "the highest price achieved for any American work at auction," beating out a Jean-Michel Basquiat skull painting that sold for $110.5 million in 2017. “We did sell the most expensive painting of the 20th century,” Christie’s specialist Alex Rotter told the Times. “This is a big achievement.”
Sponsored

As Matt noted in yesterday's Slog AM: There's a baby formula shortage nationwide. Now, West Seattle's breast milk organization Nurturing Expressions says they are seeing an increase in first-time donations from new moms who are trying to pitch in to close the gap, reports Q13 Fox. If you're lactating and want to join the effort, learn more on Nurturing Expressions' website.

When will the Queen step down? For the first time during his mother's reign, Prince Charles delivered the Queen's Speech, as she couldn't make it due to "mobility issues," reports CNN. The 73-year-old read out the government's legislative agenda to open Parliament and caused a bit of a stir when he decided to sit on his mother's throne instead of standing behind it. The scandal!

The price of a 3-bedroom in this city is getting pretty fucking ridiculous: Who cares if it's in one of the most ~exclusive~ enclaves in the city with a rose garden, pool and spa, terrace, and 120 feet of beach front? In any case, the property is one of nine houses in Madison Park's Reed Estate and, as the Seattle Times' Heidi Groover notes, is "among the region's most expensive." Fine, but the finishings are ugly! When will millionaires realize that wood on fridges looks terrible?

The three-bedroom home up for sale for $35 million is one of nine in the Reed Estate, a fully gated cluster of homes in a Seattle neighborhood that has been home to some of the city’s wealthiest residents. https://t.co/T7lRczyXtM
— The Seattle Times (@seattletimes) May 9, 2022

Construction coming to Pier 58: After crews fully removed Waterfront Park a year ago, the city announced yesterday that it had awarded Pacific Pile & Marine, LP a contract worth $34.5 million to rebuild a new Pier 58, reports KING 5. Construction is forecasted to take two years to complete, and it will feature a plaza, an event space, a seating area, a fountain, and futuristic- and a freaky-looking playground with a four-level jellyfish tower.

Bird flu outbreak in Spokane County: This is the second outbreak of the disease this year and, in this instance, it affected a group of "about 75 geese, chickens, ducks and guinea fowl." All were euthanized. Health officials said there is "no immediate public health concern."

Around one hundred protesters turned up outside Justice Samuel Alito's house: Following similar protests outside the homes of fellow conservative justices John Roberts and Brett Kavanaugh. According to Politico, the activists held signs that read "Repro Freedom for All" and "Abort the court!," protesting Alito's draft opinion cruelly overturning Roe v. Wade, which was leaked last week. Of course the political establishment is scared shitless of this First Amendment exercise. The Senate has already unanimously passed a bill that would "provide police protection to the immediate families of the nine justices and other officers of the court" if deemed necessary. The lack of spine and moral resolve by those in leadership continues to shock me.

Mountain break: No, not THAT mountain. This one :')

In Stranger alum news: Former Stranger critic Angela Garbes's new book Essential Labor: Mothering as Social Change got a rave in the New Yorker from none other than Jia Tolentino herself. "The physicality of Garbes’s motherhood—the changes in her own body, the tedious, tender attention to soaked sheets and chapped butts, the ravenous appetite her children inherited—brings her to a new understanding of unconditional worthiness that she strives to extend to the world," writes Tolentino. Essential Labor is officially out today at your local bookstore—congrats, Angela!

I can't believe I missed this yesterday: It's been thirteen years since Avatar dropped, and now the James Cameron series is back with a trailer for the second installment called Avatar: The Way of Water. Looks kinda sick (for a blockbuster movie).

Brief Ukraine update: President Biden signed a modern day Lend-Lease Act (Big APUSH Energy) yesterday, which allows the United States to lend arms more quickly to Ukraine. The New York Times notes that Biden has also "proposed $33 billion more in military and humanitarian aid." The Ukrainian port city of Odesa is getting absolutely pummeled by Russian military forces "as part of efforts to disrupt the supply lines and weapons shipments that have been critical to Kyiv's defense." And United Nations human rights officials warn that the actual civilian death toll could be "thousands" higher than the current toll of 3,381.

Being a cop in Washington state pays: Despite how much WA Republicans and Democrats alike whine about the treatment of cops, a new study from WalletHub found that Washington "is eighth-best state in America to be a police officer," reports KOMO.

More human remains were discovered at Lake Mead this weekend: Authorities are still figuring out the cause of death, but this discovery comes after another set of remains were found just last week, reports CNN. All because drought is slowly draining the water levels of the massive reservoir. I bet lots of mafia members are cursing climate change.

For your listening pleasure: Qendresa's "Be Mine."