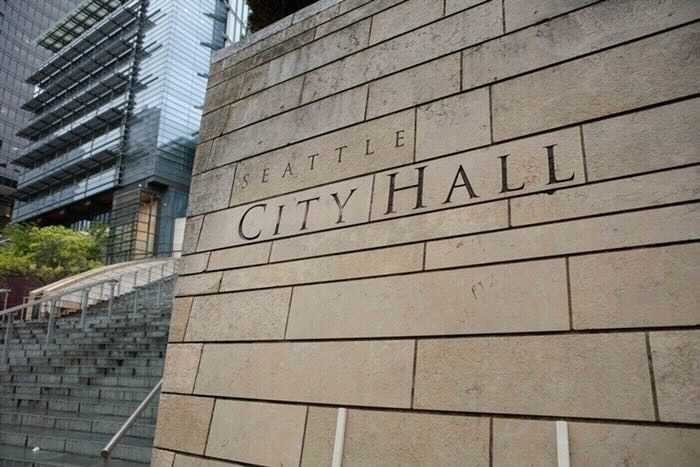 A new temple of abstention Lester Black
On Tuesday, the Seattle City Council voted 7-0 to make sure Councilmember Alex Pedersen never has to look bad again for not doing the bare minimum of signaling virtue with resolutions.

After considering one too many resolutions advocating for a better world outside the small planet of Seattle, Pedersen tacked on an amendment to (ironically) a resolution from Councilmember Debra Juarez to change some of the council’s rules.

Juarez’s resolution added guidance on the council's consent calendar, a tool they started using in 2022. Items on the consent calendar are considered as a group and require only one vote for non-controversial, administrative, or routine items. Any council member can remove an item at any time to make a comment or open a discussion, like when Councilmember Tammy Morales pulled some more routine items off the consent calendar to speak to a few appointments specifically. The tool is common among many King County boards and commissions.

Under this new rule, council central staff found that council members could have abstained from 44 out of 226 resolutions in the past three years, including Sawant’s Starbucks resolution, a resolution supporting the recent Seattle Public School levies, and a resolution affirming the rights of the press, legal observers, and medical personnel covering the 2020 protests.

“I don’t want to be in the position, the judge, the arbiter of deciding what is directly affecting the administration of government,” she said, adding that she didn’t want to deal with the back-and-forth of determining whether a resolution met that criteria. She said she proposed a resolution herself that didn’t meet that criteria when she asked that the council support tribal nations in regards to boarding schools.

Worried council members would have to “justify” their abstention, Councilmember Teresa Mosqueda simplified his amendment to read “Abstentions are not allowed on actions, other than resolutions,” which Pedersen called an “improvement” to the original amendment. The committee unanimously passed Mosqueda’s amendment to the amendment, voted to adopt the amendment (except for Strauss – I asked why and you’ll be the first to know), and passed the underlying legislation unanimously. So, the full council saw Mosqueda’s version of Pedersen’s amendment on Jaurez’s bill.

Now that council members will not have to bicker about what is “related” and what is “directly under the City’s control,” I asked where Pedersen personally draws the line: He didn’t want to vote on Sawant’s resolution to support Starbucks workers in their struggle to unionize, but he did support her call on Congress to codify Roe v. Wade, for example. I will update if he responds.

The new rules also do not address Pedersen’s (or Councilmember Sara Nelson’s) concerns that resolutions beyond the council’s purview waste the council’s time, because anyone can still propose such a resolution. I asked Pedersen’s office if he had any strategy to cut downtime spent on resolutions, and I will update if he responds.

While it may seem like a silly rule change, Pedersen has worked toward this resolution to end all resolutions (or at least end Pedersen being forced to take a stance on straightforward human rights issues) since his first year in office. After a few housekeeping resolutions at the beginning of 2020, Sawant – Pedersen’s perfect foil when it comes to resolutions – proposed a resolution “affirming The City of Seattle's support for its local Iranian-American and Iranian-immigrant communities.” Pedersen voted yes on that, but his patience with resolutions about the oppression of marginalized groups would soon wear thin. Sawant then proposed a resolution reaffirming Seattle as a “welcoming city” and expressing solidarity with South Asian Seattleites regardless of religion and caste. Pedersen not only voted no, but he came back the next week with a snarky resolution of his own, one that reaffirmed Seattle as a “welcoming city” and condemned all forms of oppression throughout the world.

Despite being a clear riff on Sawant’s resolution and others, Councilmembers Lisa Herbold, Strauss, and Lewis all joined him in voting yes. The only other council member in attendance, Morales, said no.

“It's important to condemn oppression, but we must caution against universalizing the shared experiences of oppression itself. Doing so can minimize the ways that different groups experience oppression,” Morales said before voting.

If that vote had happened after this new rule change, the other council members who couldn’t be bothered to deal with Pedersen’s bullshit could have attended the meeting and abstained instead of biting a bad-faith bullet suggesting that they did not care about oppression. Likewise, now Nelson won’t have to say she supports workers but can’t support resolutions affirming their union efforts, and Pedersen won’t have to explain why he can’t devote council time to international human rights violations despite the resolution taking the same amount of time regardless of his vote.