After decades of playing guitar for beloved mathcore unit Botch and wildly eclectic rockers Minus the Bear, Seattle's David Knudson finally has released his debut solo album, The Only Thing You Have to Change Is Everything. He's distinguished himself with his two-handed tapping technique, which allows him to create countermelodies in an efficient manner.

The 10 songs on The Only Thing You Have to Change Is Everything skew more toward his work with Minus the Bear than Botch.

The pro studio sheen here—courtesy of producer Sam Bell (UNKLE, Bloc Party, Minus the Bear)—glosses up Knudson's accessible songwriting for a collection that eagerly angles for radio play. The beats, which Knudson programmed and engineered, are massive and meant to be heard and felt in large venues. In a press release, Knudson said, “This record wouldn’t exist without my sobriety. It prompted me to learn and embrace new passions like drum programming and engineering. I haven’t felt a burst of inspiration like this in a long time. Removing all the self-inflicted chaos and complications opened my eyes to real life and opened my ears to new possibilities.” Guest vocalists Jake Snider (Minus the Bear), Julia Kugel (Coathangers), and Bayonne, further increase Knudson's commercial prospects. One wouldn't be surprised if he got tapped to open for Aussie psych-rockers Tame Impala on their next tour.


The album's opening song, “Varv,” is an odd choice for a first single, as it's the only instrumental on The Only Thing. Not only that, it's the album's toughest track rhythmically and its most adventurous texturally. You might say it's a bit of a red herring, but you have to admire Knudson's perverse decision to lead with it. The drums and bass conspire to generate irrepressible, earth-moving motion while guitars and synths go 4th of July in the higher frequencies. Everything's pumped up enough to score a climactic scene in a Hollywood thriller. “Varv” sounds like an ideal album-closer and live finale, but here it is batting lead-off. The adrenaline blast should carry you through the remaining nine songs on The Only Thing and possibly into tomorrow. 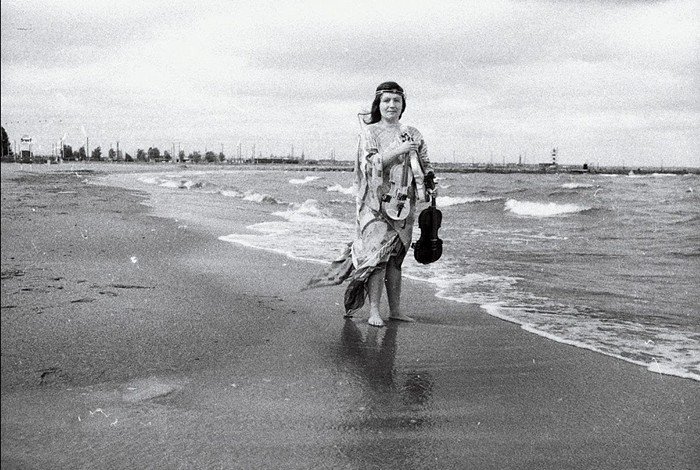 Not gonna lie: I checked out composer/musician Valentina Goncharova's music partially because she's from Kyiv, Ukraine. But beyond that newsy connection, Goncharova's publicist hooked me with some comparisons that hit the bull's-eye of my wheelhouse, including Fripp & Eno, Yoko Ono, Pauline Oliveros, and Tony Conrad. Such heady company promises a profound listening experience, and Goncharova (and her label's PR team) didn't disappoint.

Born in 1953, violinist Goncharova is an obscure figure in experimental music whose work hasn't been easy to find since her 1980s heyday. Thankfully, the Shukai label issued Recordings 1987-1991 Vol. 1 and Recordings 1987-1991 Vol. 2 in 2020 and 2021, respectively, on cassette and digitally. Originally released in 1989, Ocean: Symphony for Electric Violin & Other Instruments in 10+ Parts is finally getting a reissue via Hidden Harmony. (The album contains a majestic 23-minute bonus track from 2021 titled "Return to the Ocean.")

Classically trained in violin at Kyiv and St. Petersburg conservatoires during the 1960s and '70s, Goncharova nevertheless isn't concerned about the canon so much as she is with improvising while drawing on elements found in raga, free jazz, psychedelic rock, Balinese gamelan, and Japanese gagaku, and other styles.

With help from her husband Igor Zubkov, an electrical engineer who made her a violin augmented by magnetic and piezoelectric pickups, which broadened the instrument's sonic capabilities, Goncharova was able to manifest her ambitious ideas. Moving to Tallinn, Estonia, Goncharova and Zubkov built a studio in their house, kitted it out with a state-of-the-art sound system and Soviet turntable, and conceived the symphony Ocean, a work as mysterious and roiling as its titular subject.

Goncharova explains in the press materials: “Ocean is an experience of passing the Human Soul and Mind through the different states of the material world: birth, development, and achievement of perfection, transformation at the points of The Way and Silence, the manifestation of the harmony of the world (Om), which until then had remained in a latent state. It is averse to both mainstream contemporary physics and fringe scientific research. It exists outside their explanatory power.” Undoubtedly, it's a heavy opus, a novel stream of phonemes molded into untranslatable words. But Ocean is also a rewarding listening experience for those who seek inventive renovations of established forms.

“The Way” features what sounds like synthetic, pitched-down tablas gnomically percolating while Goncharova generates silvery shards of suspense on her electric violin. The effect is exceedingly strange and oddly ritualistic, recalling the more intense moments of England's Third Ear Band. A sense of timeless turmoil emerges, and you feel transported to a more ancient and elemental era, through the wonders of '80s technological innovation and Goncharova's ingenious synthesis of the world's most sublime musical genres.