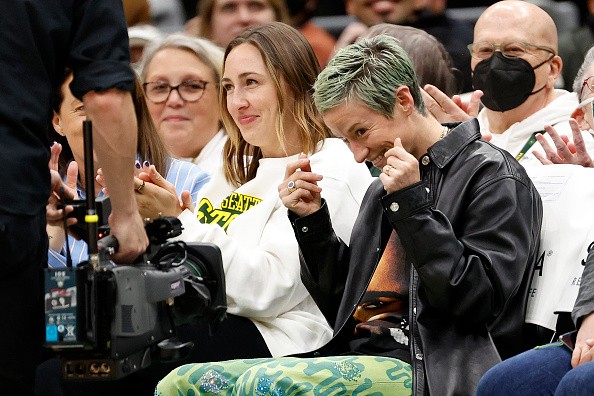 Get that money, Rapinoe. Steph Chambers / GETTY
Now playing on This Week in Worker Conquests: New technology scans our faces and attempts to read our minds. Greedy railroad barons get us in a whole heap of trouble. A nation hangs in the balance as the results of an election trickle in. But first: Good news afoot in a footy org.

This week U.S. Soccer announced that the league will pay the players on its women’s team as much as it pays the men. About time.

Dorks, is this your king? Union-buster and emerald mine heir weirdo who did not build Tesla, and who actually sued the people who did build it over the right to call himself a “founder,” had himself quite a week. His bid to buy Twitter is in peril, he got dunked on so hard online that his mom logged on to defend him, and he put out a weird set of tweets claiming he used to be a Democrat but wasn't anymore. Then he changed his story about why he was no longer a Democrat. See here:

NEW: Elon Musk says he’ll vote for Republicans this year because “the Democratic Party is overly controlled by the unions and…class-action lawyers.”

Musk is a notorious union-buster & was hit with a class-action lawsuit from 1k Black workers who alleged rampant racism at Tesla. pic.twitter.com/2SEUBTgDXm
— More Perfect Union (@MorePerfectUS) May 18, 2022

And then on Thursday we found out what all this sound and fury was about. Business Insider reported a bombshell about SpaceX paying an employee $250,000 in a settlement after she accused Musk of sexually harassing her. He denies the allegations. Deep respect to this brave woman for speaking up.

Starbucks workers win Battle of Portland: One day after four (!) Portland Starbucks stores voted to unionize, two other stores held daylong strikes to protest union-busting activity, according to the The Seattle Times. Starbucks apparently followed its classic formula, identifying union leaders and cutting their hours. Unfortunately for them, workers said, “Let’s hit the pickets.” These folks are tough, tougher than a certain Bean Boss we know. The tracker is at 263. Over 80 stores are now unionized. Cry, Howie!

U.S. workers win in some primaries: Corrupt politicians will not end this New Gilded Age, but more good people in office just might. This week, pro-labor candidates took a big step toward that goal by winning their primaries. Those include Summer Lee in the Pennsylvania House race, John Fetterman in the Pennsylvania Senate race, and Andrea Salinas in the Oregon House race. But it won’t be easy to turn the Dem party into one that actually cares about regular people more than corporations. I mean, they ran a dang union-busting lawyer against Summer Lee. Politico offers some good analysis on the week’s primary results.

Quiz time! How much do you think Amazon’s new CEO Andy Jassy makes in a year? Take a guess. Nope! It’s more. Unbelievably so. The Teamsters say they did the math:

But his workers aren’t scared to speak up: This week, news broke that Amazon employees are allegedly harassed at work and given no solutions, allegedly discriminated against if they get pregnant, and allegedly made to develop invasive technology that is potentially damaging to their own communities. In Minnesota, workers say they were punished for picketing for time off for Eid, and then they had the courage to speak up *again* to More Perfect Union about it. These folks will not be intimidated:

NEW: Amazon is penalizing workers who staged a walkout in Shakopee, MN.

Workers walked out to demand time off for the Muslim holiday of Eid & reinstatement of a $3/hour pay raise.

One worker said the company responded by docking those who walked out up to 10 hours of time off. pic.twitter.com/PHQWLkynVz
— More Perfect Union (@MorePerfectUS) May 16, 2022

New York introduces pro-worker legislation: Our civil servants are starting to hear our voices. The Daily Gazette reports that in New York, state Dems are introducing legislation that will limit Amazon’s two favorite things: Running a monopoly and allegedly working their employees to the point of injury.

Confirmed—‘Union drip’ is the Spring look: Experts declared that all fashion trends died in 2022. Well, maybe not. As This Very Column has documented from the beginning, people want to signal their alliance with working people over corporations. Wearing brands like Obey Clothing, inspired by the must-watch pro-worker film They Live, was an indirect gesture. Wearing union drip? Folks, that’s about as on-the-nose as it gets. It says you Get It and you don’t care who knows it. Elle and Teen Vogue have more on the trend driven by Amazon Labor Union’s president, Chris Smalls.

Apple union-busting: Maybe Apple workers need a union leader like Chris Smalls. Bloomberg and The Verge report that they’ve been engaging in some serious union-busting, including holding captive audience meetings that the NLRB has deemed illegal. Time for the NLRB to back up tough talk with big fines.

Zoom urged to drop face-scanning tech: Human rights groups, including the ACLU, are challenging Zoom to stop developing technology for their platform that would scan users’ faces to attempt to determine their mood. Why? Because we weren’t born yesterday, and of course this could go wrong if implemented. I am begging people who run tech companies to watch one (1) sci-fi movie.

Railroad baron: Politico detailed how greedy railroad companies loved laying off workers so much that they went and created a whole dang supply chain issue. Folks, grab your bandanas and saddle up.

The problem with work: Feel like work isn’t nearly as fulfilling as it’s supposed to be? Almost like you were fed a great big lie? The folks putting on The Problem with Work, a virtual event on May 30th, know what you’re feeling. Be there, and whatever you do, please do not be square:

The Problem With Work, co-sponsored by Salvage and @haymarketbooks

Salvage LIVE’s @annie_etc_ and @BarnabyRaine with host @AmeliaHorgan and @sarahljaffe for a discussion about the problem with work today—and what to do about it—on Monday, 30 May.

Patty Murray fund the NLRB challenge: 40 Democratic U.S. Senators sent a letter to the House Appropriations Subcommittee on Labor, Health and Human Services, Education, and Related Agencies requesting $368 million for the National Labor Relations Board. The department is woefully understaffed for this historic labor movement we’re having, and they need the money to pay more workers. She’s championing the No Tax Breaks for Union Busting Act, which is good, but now it’s time to fund the NLRB, too. Don’t stop now.

Mom-and-pop pot shop caught, must pay up, stop: Last week, the Washington State Department of Labor & Industries and the office of the Attorney General announced they would be filing a complaint against Elizabeth and Todd Byczek, who own three cannabis stores in Spokane, for up to $300,000 in wage theft. Elizabeth and Todd? If the facts laid out in the complaint are true, then boo.

Server sure served sucky ex-employer, yes sir: This guy, who reported his former employer to the DOL and got them to pay $1.3 million in back pay? No boo. Yay.

Bottom of the column yays: Workers at Card Kingdom in Ballard filed for an election, as did the folks at Badger Transportation in Kent. Meanwhile, Longview Newsguild won a new contract with a modest pay increase for their workers at The Daily News.

But the other McClatchy papers could use some help: If you're so inclined, let 'em know you want your journalists to earn fair wages.

We are asking people who care about protecting journalism in our communities to support us by signing this petition.

That’s all, folks! Send us your tips and information about organizing, and be sure to throw away your popcorn on the way out.

Now let’s roll credits. For the song of the week, here’s a twist ending you couldn’t possibly have seen coming: Alien Ant Farm. Another twist! It’s not “Smooth Criminal.” Have a great weekend.

Comments 8
Tags: News Labor
The Stranger depends on your continuing support to provide articles like this one. In return, we pledge our ongoing commitment to truthful, progressive journalism and serving our community. So if you’re able, please consider a small recurring contribution. Thank you—you are appreciated!
CONTRIBUTE NOW