Do not miss the Block show at Vermillion Art Gallery and Bar on Friday, May 27, at 9 pm. Charles Mudede
It's the spring of 1993. My cousin Farayi and I are in a car with another cousin, Nyasha. A few hours before, Nyasha was in a plane transporting him from his old home, London, to his new one, Seattle. When the plane was only minutes from landing, he looked through the oval window and saw the spine of Pacific Northwest volcanoes. Where was he going to? The land before time? A place so far away from everything that mattered. He was already longing for London, the capital of a colonial world that included our country, Zimbabwe.

When we pass Southcenter Mall on I-5, Nyasha, who is in the backseat with the luggage, leans forward and excitedly recommends we play the cassette in his right hand. "This is what everyone in London is listening to right now," he says, as if speaking to people in the sticks. Farayi, the driver, ejects the tape that was playing 93 'til Infinity, and puts in his tape. We listen for a few minutes and think something is wrong. Is the tape getting chewed? Why is the beat moving so fast? What the fuck is this? "It's jungle," Nyasha says.

Farayi and I burst into laughter. "You call this music? How do you even dance to it? This shit is going nowhere fast." As we approach the towers of downtown, Farayi ejects the jungle and hands it back to Nyasha. London has gone insane.

Jump nearly 30 years in time, and you will find me on Friday night (May 27) dancing like never before to a beautiful, lyrical, gorgeously beat-driven jungle set performed by Block (Rocket Tha Prophet, Adam Baerwolf, and associates) at Vermillion Art Gallery and Bar. (Jungle is now called drum & bass.) Nyasha certainly had the last laugh on this one.

Drum & bass, whose moment in the sun was the second half of the 1990s (garage and dubstep replaced it in '00s), appears to be making a comeback for reasons that I have yet to accurately determine. Some say it's because TikTok kids are using it for their clips, which makes some sense. A year after first it hearing drum & bass (jungle) in my cousin's car, I came to realize it perfectly captured the speed of a culture that had finally fully entered the information age, the age of portable phones and file-sharing websites. The speed of the beat was the speed of DSL in your home and global financial transactions in the stars. The poet and philosopher of this new world, Jean Baudrillard, wrote this in his brief essay, "Transeconomics":

...The mass of floating money whirling about the Earth in an orbital rondo. Money is now the only genuine artificial satellite. A pure artifact, it enjoys a truly astral mobility; and it is instantaneously convertible. [It is] the orbit in which it rises and sets like some artificial sun…

Artificial sun, artificial jungle—the future-shock of the 1970s was by the '90s a distant thing of the past. Drum & bass was not in the future; it was an exploration and expression of how much you could fit into the now, how much feeling and information could be compressed into a slice of time. Is this not TikTok?

Indeed, this is how one and young TikTok star, Piri of Piri and Tommy Villiers, recently explained the reemergence of drum & bass in the The Guardian: “You can get a lot of information from the song in a shorter period of time. It keeps you stimulated... A verse in a house song is going to be longer than a verse in a drum’n’bass song. On TikTok, you have to make a very strong vibe in 15 seconds, and in drum’n’bass, you can get a whole chorus within 15 seconds, just because it’s faster.”

"My friend who is also performing this Friday [May, 27, at Vermillion] is a very popular TikTocker," explained Rocket Tha Prophet during an interview about his drum & bass sets. "He makes drum & bass off his MPC. You can check him out @bamboonisdead on TikTok. ...But that's what's so interesting right now. The show is becoming something that the kids and the parents can enjoy at the same time. This is actually kind of amazing. It's like well, you know, something's lasted long enough for it to be popular again."

Rocket Tha Prophet's background is in hiphop. Those are his roots, but he completely understands drum & bass and electronic music in general. For him, it's all a part of a sound-system culture that had its start in late-20th Century Jamaica. And in our time and city, it all comes together during his crew's sets at Vermillion. You got the boom of the speakers, the rush of the DJ's beats, the immediacy of the rappers (which include Suntonio Bandanaz and Tha Hajj), and the seemingly inexhaustible exuberance of the dancers. 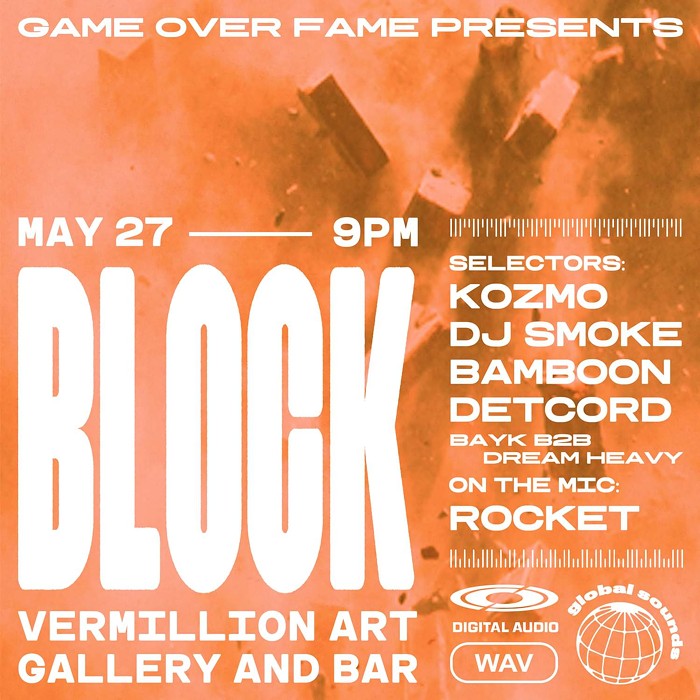 Let's close this post with a '90s drum & bass track that's truly sublime, Peshay's "The Nocturnal (Back on the Firm)":