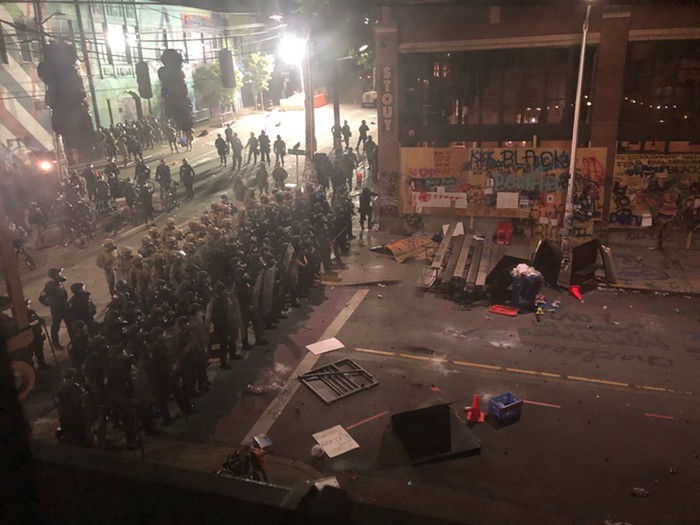 And by "gagged," they don't mean it in the fun, choking-on-tear-gas-at-a-protest kind of way. RS
Based on some confusing and passive-aggressive exchanges between the City Attorney’s Office and the Seattle Human Rights Commission, it looks like officials in City Hall are trying to construct a narrative that would allow the Seattle Police Department to wash its hands of the reputation it’s earned from patterns of racial bias found in its policing and use-of-force practices.

The #OneSeattle story they apparently want to construct aims to show that the agency’s reforms have “worked,” and so the department no longer needs a federal judge to oversee any of its policies, as required by a Consent Decree it signed with the Department of Justice back in 2012. If a federal judge buys that argument and ends the oversight requirements, current City leaders would likely bathe in lots of positive press, and SPD would fully emerge from its long shadow.

The only problem? Several Human Rights Commissioners I’ve spoken with don’t believe that the judge is getting all the input he needs to make an informed decision.

Since the Obama administration, the Department of Justice has used Consent Decrees to attempt to enforce some accountability and transparency on police reform efforts. People offer mixed reviews of the tool's effectiveness. Supporters often credit the process as the only mechanism the Feds have available to force compliance with reform. Meanwhile, critics note that the legalistic nature of Consent Decrees can pose an obstacle to reform.

Locally, both the good and the bad of the Consent Decree process were on full display in July of 2020. Judge James Robart, the guy overseeing SPD’s Consent Decree, used his oversight to “slap down” then-Mayor Durkan’s attempt to void the City Council’s law banning blast balls after the George Floyd protests. Then, two days later, he flip-flopped and used that same oversight power to strike down the ordinance.

Regardless of what you think about the job performance of the police over the last few years, whether the cops continue to have a federal judge looking over their shoulders is a big deal, which is why it seems odd that the City Attorney’s Office has taken a hostile position towards a bunch of city-appointed volunteer commissioners trying to give more community feedback to Judge Robart.

How we got here

The Consent Decree first came into existence after President Obama’s Department of Justice conducted an investigation, found that the Seattle Police Department regularly engaged in a pattern and practice of unconstitutional use of force against Seattleites, and sued the City. The DOJ and the City eventually settled that lawsuit in 2012, and the resulting settlement agreement became the Consent Decree.

The Consent Decree essentially designated a federal judge to babysit SPD. The judge decides whether the cops actually keep their promises to reform their unconstitutional practices. He also appoints a Court monitor, who must (among other things) collect community feedback and data from the department itself.

To assist in this process, the City created the Community Police Commission (CPC). They conduct community outreach and hold public meetings where regular people talk about the failures or successes of reform efforts. The commission also gets a special status that allows them to appear before Judge Robart. That status is called “amicus curiae,” which is fancy lawyer-speak for “friend of the court.” Obtaining that status allows the CPC to occasionally send information directly to Robart.

Not so fast, Human Rights Commission

Attaining amicus status isn’t usually a complicated affair, as dozens of advocacy organizations regularly file such briefs with the Supreme Court on issues ranging from nuking abortion rights to arcane matters of federal civil procedure. But the conflict over who gets this status with Robart rests at the center of this beef between the Human Rights Commission and every other player in the City.

According to several commissioners who spoke with me on the condition of anonymity due to fear of retaliation, people have been showing up to their public meetings since at least last fall to express doubts that the CPC was conveying their criticism of SPD to Judge Robart. They took issue with the way CPC compiled its data on use-of-force incidents, and they claimed the CPC hadn’t sufficiently addressed issues of accountability and transparency.

Those HRC commissioners say they did their best to capture and relay that feedback to partners working within the Consent Decree, including the CPC. But after months of trying to work within those indirect channels, the commissioners say they realized they needed a direct line of communication to the Court. During their early April public meeting, the commissioners voted to seek the same amicus status as the CPC so that they could brief the judge about the feedback they’d received. They even got as far as discussing potential pro bono representation for the application with some local attorneys.

Apparently, that move didn’t go over well with the City Attorney’s Office. As first reported by the South Seattle Emerald, the CAO sent the commissioners a confidential memo arguing that they did not have the authority to seek amicus status. Effectively, that meant the commission wouldn’t have a direct line to Judge Robart to convey the missing community feedback, so they pushed back. But pushing back wasn't easy. They say the City Attorney claimed the memo was legal advice and therefore subject to attorney-client privilege, meaning they couldn’t explain to the people who pushed them to seek amicus status in the first place why they couldn’t move forward.

After the commissioners sought clarification about whether they could find a way to discuss the first memo with those disappointed members of the public without violating the claimed attorney-client privilege, the CAO responded with another memo. In that dispatch, the CAO claimed that only Mayor Bruce Harrell could waive the privilege and allow the commissioners to discuss the CAO’s initial legal advice in public.

That memo left the commissioners I spoke with feeling as though they’d been given a gag order. When city entities such as the Mayor’s office or the City Council disagree with the CAO’s legal advice, which happens occasionally, they can hire an outside lawyer for a second opinion. However, the Human Rights commissioners are volunteers. As a result, they’re more vulnerable to retaliation if they defy the CAO’s advice, and so they have fewer resources to secure outside counsel. And, taken together, both memos prevent the commissioners from even trying to get that second opinion.

But according to Seattle University Emeritus Professor of Law John Strait, an expert on matters of professional responsibility such as attorney-client privilege, the CAO’s argument isn’t as open-and-shut as it claims. He said in a phone interview that in situations like this, where one subdivision of a government determines they may hold a legal position in conflict with the chief executive, courts in Washington have ruled inconsistently on whether the disgruntled agency can seek independent counsel.

Based on that analysis, the CAO effectively has two options for keeping the Human Rights Commission from getting amicus status: Loudly gag the commissioners by taking this maximalist position on whether they can hire their own lawyer, or let the commissioners file their motion for the status with Judge Robart and then quietly just oppose it in court. The office could also theoretically embrace the commissioners’ move to provide more feedback to Judge Robart, too, though that doesn’t seem likely at this point.

Professor Strait expressed confusion about why the City Attorney’s Office took such an aggressive position before the Human Rights Commission even filed a motion – after all, this entire dispute began when the commission merely voted to pursue amicus status. From Professor Strait’s understanding of the Consent Decree process, Judge Robart has “complete discretion” to decide who he does and doesn’t want to hear from.

All of this leads to the obvious conclusion that no one mired in this controversy wanted to say on the record: The only reason for the City agencies involved in this process to try to intimidate the Human Rights Commission in this way would be to prevent Judge Robart from hearing what the commission had to say. And, given the congratulatory tone of the monitor’s latest preliminary report, it certainly sounds like the people responsible for delivering community feedback want the judge to hear that SPD is doing just fine – aside from that one outlier period of wantonly abusing people’s civil rights in the summer of 2020.

Maybe ending the Consent Decree as soon as possible is the right decision. Maybe it’s not. But closing off an avenue for people who think the process has left them out seems strange when “restoring trust” is supposed to be a central goal of reforming SPD in the first place.