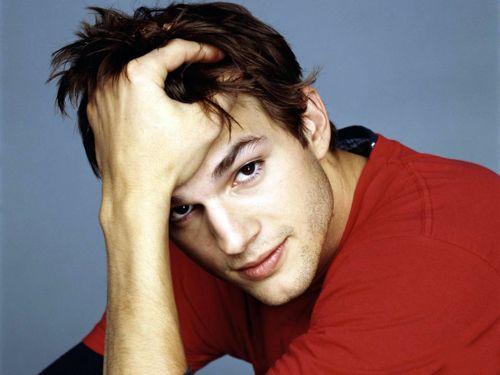 Last Friday night I appeared on Real Time with Bill Maher via satellite from New York. One of the three panelists on last Friday's show was Ashton Kutcher. Longtime "Savage Love" readers will recall that I had something of a crush on Kutcher back in the day—back in the pre-Punk'd days, the pre-smoking-a-cigarette-on-the-cover-of-Rolling Stone days, the pre-Demi days. On Friday night Ashton brought up an email exchange that we had at the height of my crush. While Kutcher swore me to secrecy about the email at the time—he wanted to keep things between us on the "down low"—this is the second time Kutcher has brought up our email exchange in a very public way. First in a Rolling Stone profile, and now on Real Time. I've never publicly discussed our email exchange.

I have no other choice but to go on the record because Kutcher claimed on Real Time that I sent him a "nasty" email after he sent me a polite note declining an invitation to an entirely hypothetical sex party. Nasty? The record will show that Kutcher is either misrepresenting or misremembering our exchange.

But before we get to the email exchange, some context: It all began in January of 2002 with an innocent aside, an offhand comment, a parenthetical reference to Kutcher...

That aside lead to this exchange in a subsequent column:

You recently wrote, "My imagination is wholly devoted to images of Brad Pitt coming all over Ashton Kutcher's face." Can you try to leave your own graphic sexual fantasies out of your column? Especially when it has nothing to do with the question! This wasn't advice; it was forcing your readers to listen to your fantasies.—KS In Portland

Which lead in turn to this exchange:

Way to go, Dan! A column that was all sex and no politics, with a huge variety of titillating topics! Just one question. Who the hell is Ashton Kutcher?—Clue Me In

WHO IS ASHTON KUTCHER?

Ashton Kutcher is ONLY the most beautiful man on television today. He plays Kelso on the Fox's That '70s Show, and has appeared in a handful of movies (all of them awful), including Down to You, Texas Rangers, and Dude, Where's My Car? He is frequently the subject of heavy-breathing stories in teenybopper magazines like Tiger Beat, Teen People, and The New Republic. Ashton is so famous that there are currently 40 Ashton Kutcher items for sale on eBay, including an autographed index card, a pair of his pants, and a mint-condition Dude, Where's My Car? lobby placard.

Which finally lead to this fateful exchange:

Okay, so there's not a lot of overlap, and I suppose that means I'm a desperately shallow person. In my defense, EROS, I would point out that Florence King and Katha Pollitt are both women, which disqualifies them from attending any sex party I might host. As for Paul Krugman, well, I've never actually laid eyes on the man. For all I know, Krugman is my type—skinny, tall, boyish, old enough to vote—but somehow I doubt there are many prize-winning economists out there who look like Ashton Kutcher. However, if Krugman does look like Kutcher, he's more than welcome to stick around after dinner.

I regret to inform you that you've made an extremely poor decision in inviting me to the sex party rather than the dinner party. I would be of absolutely no use to you at your sex party being that I am a heterosexual male. Although I could be an extremely interesting dinner guest.

You would have all of the superficial qualities that got me invited to the sex party readily available to you. As you could stare at me while I speak of my worldly adventures and trials and tribulations at the table.

My presence at the dinner table would be of far more use to you, hence I speak for a living, while all of your other guests are far more suited for conveying their feelings through ink and paper. Then again maybe I don't want to be invited to either because I have no desire to sit with someone who creates their invite lists through such superficial means.

Have a great party!

Before we get to my supposedly "nasty" response, I'd first like to point out that Kutcher did not, despite what he told Rolling Stone in 2003 ("I sent him an e-mail, saying, 'Hi, this is Ashton Kutcher and I appreciate that I could be invited to your party to look at, but..."), identify himself. And I'd received dozens of emails from people claiming go be Kutcher; why would I believe that this email from one "Jason Goldberg" was actually from Kutcher? My emailed response:

who are you? i don't recall inviting a "jason goldberg" to the sex party. or the dinner party. please explain yourself.

Kutcher wrote back —and, at the time, said nothing about my response being in the least bit rude.

If you reread the article that you wrote I believe it will be obvious who this is. But if you need a clue, I work on a television show that airs on Fox. I've also been featured in a major motion picture called "Dude Wheres My Car". I apologize for not writing under my own name and if you could keep this confidential it would be appreciated.

please serve caprese as an apetiser,

I honored Kutcher's request and kept our email exchange confidential. I even let it pass when he mischaracterized our interaction to a Rolling Stone writer five years ago. But I had no choice but to defend myself after Kutcher characterized my response to his email as "nasty." What was nasty about my response? And I wrote back to Kutcher again—and politely, since I believed it was him. Unfortunately I didn't save those emails. Perhaps Kutcher has them and will share them with the world.