The city approved an ambitious proposal this week for a block-long building on North 40th Street and Stone Way North (between Fremont and Wallingford). You may know the block as "that gaping chasm where the Safeway used to be." 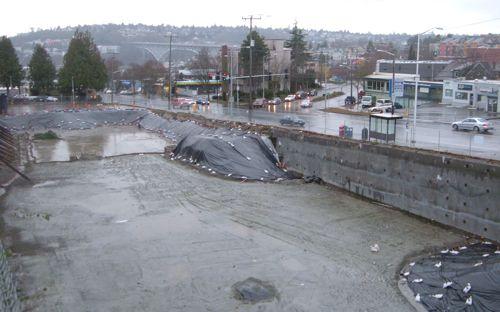 The site's fate has been in flux for years. After the Safeway closed, QFC proposed a new grocery store and a handful of apartments but then backed out. Prescott Homes later submitted an alternative for less commercial space and more residences. In its decision, the Department of Planning and Development approved a five-story building containing 143 residential units, seven live-work units, 15,000 square feet of multi-purpose convenience store and 2,000 square feet for a restaurant. (I’ve written about the site here and here.)

Although building something—anything—is better than that damn hole, the specter of more traffic on the side streets raised hackles. 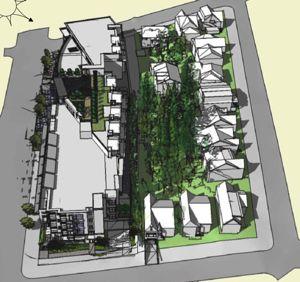 Alicia Van Buskirk led a push among neighbors to meet with the city and ask developers (starting with QFC) to modify their designs. The final plans require parking to be contained underground (not on top, as previously proposed) and limit vehicle access to North 39th Street (scratching a plan to allow parking access through a residential alley). Nonetheless, Van Buskirk says that the influx of hundreds of new residents and shoppers could result in dangerous traffic levels on side streets.

According to the city’s report (.pdf), the development will generate about 1,360 vehicle trips per day. But, the report continues, "the current proposal would generate less traffic than the previous operating Safeway store."

This specific conflict—between development on busy streets and neighbors on the side streets—is bound to increase exponentially as Seattle develops its arterials. The arguments are always the same: it's too big, it doesn't look like the houses nearby, the units are too expensive, there's too much traffic...

But arterials—which are zoned for taller buildings and situated on transit lines—are the ideal place for increasing density. People who live on arterials have long accepted their proximity to traffic and noise, but now, people set back 100 to 200 feet from an arterial have to accept the same fate. Van Buskirk deserves applause for seeking reasonable solutions, such as keeping cars on the arterial and contained in the building, rather than a knee-jerk anti-devlopment response too common among some neighborhood groups. But there's no two ways about it: Single-family neighborhoods will get more through-traffic as Seattle grows into a big city. Meanwhile in Frellingford, neighbors and the developers are preparing to meet next week to keep hashing out a traffic plan.

Prescott Homes did not return calls in time for this Slog post. So no word yet on how long this gaping hole will remain a gaping hole.