Earlier this afternoon, about 300 people packed into a subterranean room of the Grand Hyatt on 7th Avenue and Pine Street, clamoring to bid on discount condos. First on the auction block was a 900 square-foot two-bedroom condo, which had entered the market listed at $437,450 when the Press Condos completed its second building a couple years ago. But it still hadn’t sold. Today the opening bid began at only $225,000—just over half its listed price. 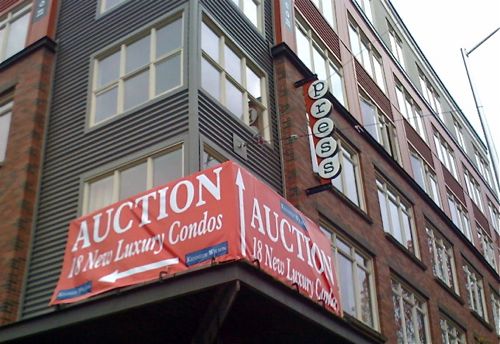 “This is the new normal,” says Rhett Winchell, president of Beverly Hills-based Kennedy Wilson Auction Group, which was auctioning 15 units of the Capitol Hill Press Condos today. The company held 30 auctions nationwide this year and Winchell expects more in Seattle next year. “Auctions obviously do grow in popularity when the economy slows because builders need a way to sell property quickly,” says the pinstripe-suited Winchell.

“I love Capitol Hill even though I’m not a hipster,” said 21-year-old Yaprak Erkul, wearing a red and white hound’s-tooth coat and chunky Gabbana glasses. She's been looking for a condo for about three months, she said, with her father sitting to her right.

Mike Norman, a CPA who lives in Bremerton and works downtown, has been searching for a condo in the city for two years. “I gave up last year because the prices got so ridiculously high,” he said. He eyed a two-bedroom unit with a courtyard, but he wasn’t going to pay more than $300,000. It ended up going for about $350,000. “I was shocked to see it went for so much,” he said.

“It’s still a deal,” said Mary Granen, a real-estate agent who joined a 34-year-old male client, an artist for a computer gaming company. Comparable units on Capitol Hill are selling for “probably another 10 [thousand dollars],” she said.

Another condo auction last month suggests this a trend in the Seattle condo market. But it’s hard to say if the phenomenon is spurred by unsellable units or driven by the auction industry. While developers benefit from selling property quickly—avoiding accruing mortgages and taxes—companies like Kennedy Wilson, which fly their staff around the country, seem to be seeding the market. “Most auction companies are going after the builders,” Winchell said.