"Please join me in the newsroom for a few minutes for an announcement."

(Originally posted on Saturday and moved up today for our non-weekend readers.) 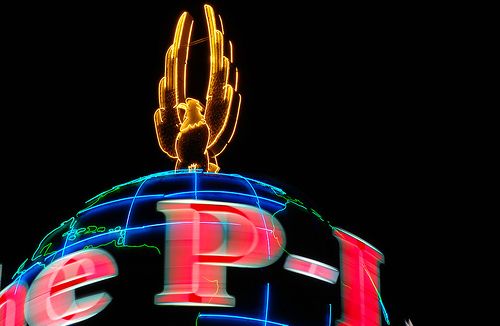 That was the subject line of the e-mail that Seattle Post-Intelligencer staffers received Friday, at 12:01 p.m., from the paper's publisher, Roger Oglesby. Everyone at the P-I already knew something was up. King 5 television had reported on Thursday evening that the newspaper, which has published in Seattle since 1863, would be put up for sale by its owner, the Hearst Corporation. Afterward, there had been hopeful speculation inside the P-I newsroom that this might be a step toward purchasing the Seattle Times, the paper's longtime cross-town rival. But that was just the hopeful speculation of a group of people who still believed what they had been telling themselves for years: that Hearst Corp., with its deeper pockets, would prevail over the Blethen family, the majority owners of the Seattle Times, in this city's seemingly endless newspaper war.

Over at the Times, after the King 5 report broke on Thursday, there had been more of an immediate realization of what was about to occur. "We got a tip something was coming on at about 5 to 5," one reporter told me. "As the news started, people were starting to gather around the TVs in the core of the newsroom. Everyone was shocked, and some people started crying. It was pretty emotional. I saw one reporter head out in tears to go report the story."

Tears because, though the papers have had a serous and intense rivalry, many journalists in town have worked at both the Times and P-I, or are good friends with someone at the other paper. Tears, too, because at moments like the one that was occurring, journalists tend to realize that their shared experience of working in a declining industry and at the pleasure of publishers and corporations whose motivations and financial situations can't always be known, and whose actions can't easily be predicted, is a powerful commonality—more powerful than, say, the fact that they write under different mastheads in newsrooms with slightly different cultures.At the Times, David Boardman, the paper's executive editor, was seen running toward Times publisher Frank Blethen's office as soon as the Thursday report finished airing. In the newsroom, it immediately became a story everyone wanted a piece of. By the time Boardman came back a short while later, reporters had been assigned and he'd clammed up; he didn't want to be quoted. Stories were written, put to bed, printed, published online.

Then, on Friday, the e-mail message from Oglesby. It was a body-less e-mail, the only text being that foreboding subject line: "Please join me in the newsroom for a few minutes for an announcement." People in both newsrooms by now had a sense that it wasn't going to be good news for the P-I. The King 5 story, though it was anonymously-sourced, still hadn't been knocked down—despite the fact that many of the best reporters in town had been trying hard, for about 20 hours, to prove or disprove its accuracy.

Mike Lewis, who writes the Under the Needle column for the P-I, was out of the office working on a column and received Oglesby's e-mail via Gmail. “Well, that meant obviously something was going to happen," he told me. By the time he reached the P-I newsroom, Steve Swarz, president of Hearst Newspapers, was already there and addressing the staff while P-I managing editor David McCumber stood behind him, a heartbreaking collection of fidgets and downcast expressions. Swarz, Lewis told me, "kind of did the journalistic equivalent of the breakup speech: 'It’s not you, it’s me.'”

It wasn't about the quality of their journalism, which was great. It was about the business, which was losing money—$14 million from the P-I alone in 2008.

“And then he slowly talked the air out of the room," Lewis said. People cried quietly, or stood there with the thousand-yard stare. Some tried to ask questions. Swarz wouldn't answer them. “It wasn’t a dialogue, obviously, it was a monologue," Lewis told me.

The paper would be put on sale for 60 days. Then, if there were no buyers, it would cease printing.

Reporters asked: Does this mean the P-I will become an online publication? (Implied: Can we still work for it if it does?) What does it mean that our union contract is currently expired and about to be renegotiated? If we are laid off while the contract is expired, will we get the severance guaranteed under the old contract? Does this mean Hearst is purchasing something else in the area? Maybe the Belo-owned King 5?

“He just gave his half-sheepish, uncomfortable smile and didn’t respond.”

Mental gears began churning, those skeptical, suspicious, competitive gears that reporters use to their advantage in the normal course of work. Why had they been scooped on the story of their own likely demise? What the fuck?

"It seems clear that Hearst and/or the P-I publisher who works for Hearst intentionally leaked the news to King," another P-I staffer told me. "Maybe that's obvious to you guys, but in the whirl of yesterday's news, it took me a few hours to put it together. King reported the news Thursday at 5. King's report was very accurate. And some of the language sounded similar to Hearst's own announcement language. More importantly, by mid-day Friday, several Hearst executives from New York had visited the P-I news room. It seems extremely unlikely they all ran out and bought plane tickets because of the story King ran at 5 p.m. Thursday. Rather, it seems more likely they had previously planned the announcement and had themselves leaked the news... Hearst did not let us get scooped on the story of our own demise, Hearst arranged it. To me, that's disrespectful and plain tacky. Fuckers."

Other gears churned, too. Self-preservation gears, logical gears. Could they hang tight and hope someone would purchase the P-I? No, probably not. Who wants a newspaper these days? And what would anyone even get by buying the P-I? (Which, because of its Joint Operating Agreement with the Times, doesn't own any printing presses or employ any significant number of advertising or circulation staff.)

“There’s nothing to purchase," Lewis said. "We’re a room of people in a rented building. I’d happily offer my services. But I don’t know what they’d buy. I guess they’d get a letterhead and some pretty battered laptops, but there’s just not a lot there to buy.”

Time to drink, then.

People left the building. People took walks. People came back inside bearing inexpensive scotch and whiskey and a case of Rainier. People opened the bottles and cans, talked, mourned.

“What can you do?" Lewis said. "It’s turned into a wake, essentially. A 60-day wake. The career is drying up. It’s not just this paper.”

Over at the Times, the mood was similarly dour. A reporter there wrote me: "The mood in the newsroom is somber and—in the case especially of longtime reporters—devastated. I have heard of one editor who expressed some happiness over the end of the P-I, but that's it."

Among the ambivalent, a newsman with a long memory who wrote to me: "Remember when the P-I was so sure that they had won the newspaper war that they came and pissed on the Times lawn? I'm tempted to take a leak myself tonight, but will restrain myself."

Boardman, the Times' executive editor, took a different approach, sending an e-mail to P-I staffers that read: "While we have long been fierce rivals, please know that we take no joy in the likely closure of the P-I. Whatever future there is for a daily newspaper in Seattle will be built upon the legacy of courageous, competitive journalism we've built together with you over the decades."

So, again, time to drink.

P-I staffers gathered after work at Buckley's in lower Queen Anne, just a couple blocks away from their offices overlooking Elliott Bay. They sat around, hugged, talked about what to do next. Present were several P-I couples whose incomes are entirely dependent on a Hearst paycheck: Dan DeLong and Vanessa Ho, Angela Galloway and Lewis Kamb, Claudia Rowe and Dan Kearney. One P-I couple with a 5-month-old kid talked about spending the weekend cleaning up their house and getting ready to put it on the market.

An editor offered to buy Mike Lewis a drink. “I said, 'Just double up whatever you’re getting.'”

Lewis is 43 years old. He's worked at the P-I for eight years, and in journalism for 20. “It’s all I know, and it’s all I’ve ever wanted to do," he told me. “What I do is who I am, and I’m proud of that.” People from other newspapers have been e-mailing him to offer condolences, but that doesn't mean they have any work to offer him. “I’ve got friends in journalism. That always counted for something. It doesn’t anymore.”

Sure, Lewis knew for a long time that he wasn't in a thriving industry, and that the P-I, like every other newspaper, was struggling with declining revenues and circulation. “It’s been like being on this endless flight, on this plane where the engine’s on fire, and it won’t crash," he said. He never really wanted off, though.

So what to do now besides a few more columns before the 60 days are up?

Who Will Save Us from the Future?

What Google Has Done to Life on Earth