This morning, 43 Alaskan Natives filed a lawsuit against the Society of Jesus (the Jesuits), claiming a widespread conspiracy to dump pedophile priests in small Alaskan towns and shelter them from exposure.

The suit was filed in the Bethel, Alaska Superior Court.

Reverend Father Stephen Sundborg—current president of Seattle University and head of the Northwest Jesuits from 1990 to 1996—is named as a co-conspirator. 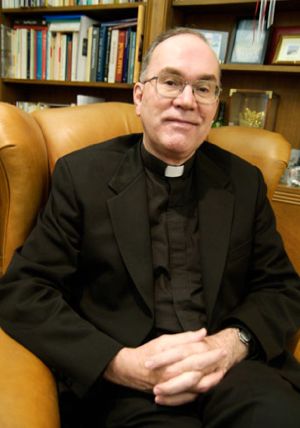 Attorney Ken Roosa announced the lawsuit at a chilly press conference outside Seattle University this morning and said, as of today, he knows of 345 cases of molestation, only two of them against non-natives.

The Jesuits, he said, sent known pedophiles to isolated Alaskan villages—many of them only accessible by boat or plane—to let them abuse children with impunity.

"It was a pedophile's paradise," Roosa said. "We are going to shine some light on a dark and dirty corner of the Jesuit order."

Today, Roosa said, there are 17,000 Catholics in the diocese of Fairbanks—which filed for chapter 11 last year—and were even fewer during the peak of the abuse, from 1960 to 1975.

The rate of child molestation by priests in Alaska, he said, "is several orders of magnitude larger" than anywhere else in the United States. (Roosa compared this lawsuit to one in Los Angeles, with 550 cases of abuse and a Catholic population of 3.5 million.)

The diocese filed for bankruptcy protection in order to pay off settlements with Native Alaskans who were molested as children. (Roosa led that effort was well. This suit—against the Society of Jesus as a whole—is the latest battle in a long campaign Roosa has been waging against the opaque, secretive way the church responds to accusations of sexual abuse.)

Some members of the lawsuit spoke at the press conference, including Flo Kenny, a short woman with a steely gray ponytail and sunglasses.

"I am Flo Kenny," she said slowly. "I am 74 years old. And I've kept silent for 60 years. I am here for all the ones who cannot speak—who are dead, who committed suicide, who are homeless, are drug addicts. There's always been a time, an end of secrets. This is the time."

She said her abuse started when she was 13 and depressed by the treatment she and other village children suffered from the nuns. "They managed us like wild ponies and beat us every day," she said. "They said it was good for our character."

She sought comfort from the village priest who began an abusive relationship that lasted several y ears. "The priest at that time took the role of the shaman and the tribal council, making the decisions," she said. The priests held all the power in these remote towns and, according to the lawsuit, many of them were known sexual predators.

Another native, Rena Abouchuk, cried while she read a letter to her village priest: "You did so many evil things to young children... God will never forgive you." Abouchuk said the priest raped and molested her and her cousins, often together in the same room, and offered to let them ring the church bell as a prize for complicity.

"You took a lot of lives," she read aloud, crying and holding an eagle feather she'd been given at a "sobriety powwow" on New Year's Eve. Six of her cousins, she said, have committed suicide because of that priest.

Abouchuk's brother, wearing a black leather jacket and a blue bandanna, said the priest who abused him gave him a few quarters each time.

"My family was very, very poor at the time," he said. "I tried to kill myself several times over this." He became homeless, an alcoholic and drug addict, but has since become sober and lives with his sister in Spokane.

A former Benedictine monk, Patrick Wall, said 28 pedophiles from four countries were specifically sent to Alaska "to get them off the grid, where they could do the least amount of damage" to the church's public image.

"The Catholic church has the largest body of documentation of non-incarcerated pedophiles in the world," he said. "These guys should be sent to the Mayo clinic and studied to find out what makes them tick... they're some of the weirdest characters you will ever meet."

Father Sundborg's office has not yet returned requests for comment. But let's revisit this story from 2006:

The president of Seattle University said Thursday he has no doubt that a Jesuit priest who taught at the school from about 1950 to 1976 sexually molested young boys.

But the Rev. Stephen Sundborg also said he believed that Seattle University bears no legal responsibility for the actions of Michael Toulouse, because any acts of sexual abuse he carried out occurred outside the scope of his official duties as a teacher at the school.

A statement from Rev. Father Sundborg:

The allegations brought against me are false. I firmly deny them. I want the victims and the entire community to know that. The complaint filed by the plaintiffs' lawyers represents an unprincipled and irresponsible attack on my reputation. Let me be clear—my commitment to justice and reconciliation for all victims remains steadfast. The sexual abuse by Catholic priests is one of the most shameful episodes in the history of our church. I will continue to work toward the goal of bringing healing to all victims.