Permission To Get Upset?

When Barack Obama chose anti-gay, anti-choice, anti-porn Rick Warren to give the invocation at his inauguration, gays and lesbians—still smarting from Prop 8—were understandably upset. Well, I thought our dismay was understandable. But a lot of folks in the comments threads here, there, and everywhere disagreed. Barack was just trying to bring the country together, to find common ground, and Rick Warren invited him to his church, and how dare you get upset, trust the man, let him get into office before you start grousing at him about this, why are you worrying about symbolism when it's policy that matters, and blah blah blah. 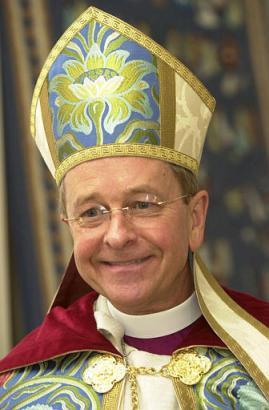 Then when Barack Obama chose Gene Robinson, the gay Episcopal bishop, to give the invocation at tonight's pre-inaugural festivities—the concert tonight at the Lincoln Memorial—the folks defending Obama were all like, "SEE? Obama is bringing the country together! Anti-gay preachers, gay preachers—everyone is equal and equally welcome!" And Gene Robinson did give the invocation at tonight's concert...and his words were very moving. You can read the full text of Robinson's prayer here.

But if you were watching HBO's broadcast of tonight's concert you didn't see Robinson, or hear his remarks... because Robinson's invocation wasn't included in the broadcast. Skipped over during the live broadcast, edited out of the rebroadcast.

Are we allowed to be upset about that?

How about the fact that tonight's other big gay moment—the D.C. gay men's chorus singing with Josh Groban—passed without the chorus, unlike every other performer, being identified?

But, hey, we made the list—Barack's good about including us in the list of people he wants to bring together: "If we could just recognize ourselves in one another... Democrats, Republicans, Independents; Latino, Asian, and Native Ameicans. Black and white, gay and straight, disabled and not..." I don't see how straight Americans can recognize themselves in gay Americans if they're not allowed to see us, I don't see how this inauguration brings us all together if gay Americans are edited out of the festivities.

If the gay Bishop—the man who was basically chosen to offset homophobic bigot Rick Warren—wasn't intentionally slighted today, then the Obama people sure have some of the worst luck ever.

Why do I doubt the same thing will happen when anti-gay bigot Rick Warren does his invocation on Tuesday.

Who engineered this blackout of Robinson? I suspect we'll hear lots about this in days to come.

Remember, this was the supposed salve on the wound to the LGBT community for the upcoming high-profile appearance of Rick Warren at the actual inauguration on Tuesday, which will be seen by millions and will float out there on YouTube in perpetuity. I had no illusions that Robinson's appearance would reach the same level of exposure as Warren's, but damn—no broadcast of it at all? That's just freaking rich.

I don't want to be an angry queer, but this shit makes me steam. Seriously. I get all worked up which is a total downer after being all jazzed about 89 year old Pete Seeger singing ALL of This Land is Your Land.

UPDATE 2: Posted, above, but adding it to this thread too. HBO says they didn't keep Robinson off the broadcast—the Obama team did.

Contacted Sunday night by AfterElton.com concerning the exclusion of Robinson's prayer, HBO said via email, "The producer of the concert has said that the Presidential Inaugural Committee made the decision to keep the invocation as part of the pre-show."

Wherever the fault lies, this is yet another unfortunate turn involving GLBT concerns over Obama's selection of Rick Warren to deliver the prayer at Obama's inauguration. Many in the gay community saw Robinson's selection to deliver Sunday's prayer as an olive branch.

But given that most Americans could not attend the concert, instead having to watch it on television, the decision to not broadcast the prayer is being seen by many in the GLBT community as a slight.

When you're throwing folks a bone it's a good idea to make sure they can, you know, see the bone.

UPDATE 3: Joe at Towleroad has another depressing tidbit...

HBO's exclusive live national broadcast of the celebration started after Robinson's prayer, disappointing millions of LGBT Americans who saw Obama's selection of Robinson as an olive branch offered after weeks of blistering criticism over the Rick Warren debacle. Even those in attendance missed Robinson's prayer, as sound difficulties caused him to be inaudible to most of the estimated crowd of 500,000 gathered in front of the Lincoln Memorial.