A Review of the Speech from the Third Row 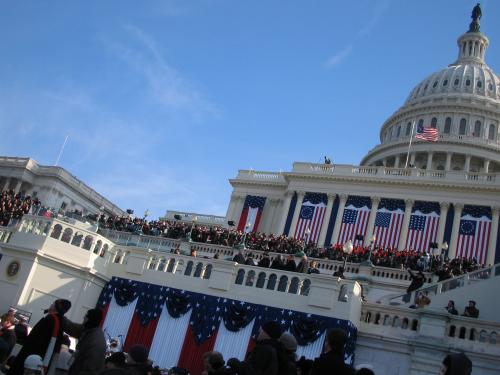 Through some mix of fate and accident and hard work and wild luck, The Stranger was issued a credential for a seat in the third row of the Green Zone, which was the farthest forward seating area at the foot of the capitol. You couldn't ask for directions to the Green Zone, or flash your green-framed ticket to the Green Zone, or walk around the Green Zone marveling at your luck in getting into the Green Zone, without thinking about that other Green Zone and the guy who made the making of the Green Zone necessary after unnecessarily invading that dusty country. I speak, of course, of the FORMER president (how sweet it is to type those words), who walked out onto that high platform after Carter, Bush Sr., and Clinton, and probably made you feel a pang of something if you were watching on TV, but in the front of the Green Zone we felt no pangs of anything because, as close as we were, we could not see. We were too close. As you can see in the photo, we saw a military band and, behind them, a high wall, dressed in red and white and blue-with-white-stars bunting, and on the top of that wall we saw the elegant edge of the stage where everything happened, and on risers around that stage were elected officials and their families and TV crews. Spotted ten or so rows behind me: P. Diddy. He was farther back; he probably could see much better. As it was, the journalists in front—a lady from U.S. News & World Report in a big weird hat, the editor of The New Yorker in a gray winter cap, a guy from London who scowled the whole time and left early—could pretty much only listen. We were lost without a jumbotron. (If you were at the Triple Door, you had better seats than me.)

That balcony off to the left is where Obama gave his address—very close to us, except obscured almost entirely by the white banister there, and mediated by that bulletproof plane of glass, which, from our perspective, was taller than he was. Also frustrating: the camera I'd brought along was losing power rapidly, in spite of having been charged overnight, and I only got one other picture, of Obama's swearing in, before it completely died. The swearing in happened a few paces behind the podium, and so from our perspective it looked like this (that's Michelle Obama, standing next to her out-of-sight husband, in the middle of that arch): 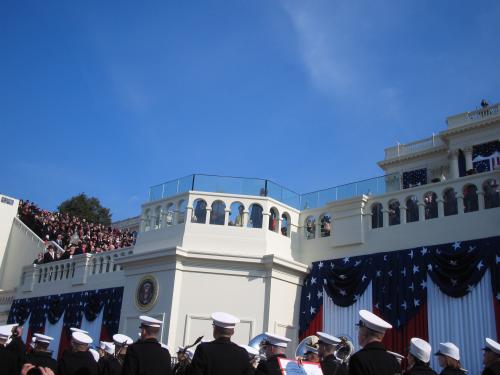 There are more photos on my cell phone, which I would love to post as illustrations of what we couldn't see—one of Dianne Feinstein obscured by the banister, one of Rick Warren obscured by the banister, one of Aretha Franklin (with that explosion of glitter stuck to her head) obscured by the banister, and one or two of the top of Obama's head (even less of his face visible that on this Stranger cover last year) while he stood, obscured, on the other side of that banister—but there have been rolling cell-phone outages all week keeping me from sending images to my email. Presumably, so that al Queda, should they be in town for the festivities, can't communicate between themselves. I won't be able to send those photos to myself until later, when I'm out in the burbs again, and watching all the things I didn't get to see for the first time.

The people in the press room where I'm typing this—which took almost an hour to get to, even though it's three blocks from the capitol—are unanimous on the virtues of the big speech, but you can't walk by a crowd right now who isn't talking about the poem instead. Oh God, the poem. In the security line leading into the Hart Senate Office Building, a family with the aristocratic bearing of a New England senator's brood, couldn't conceal their disappointment. "That was one of the worst poem-slash-readings I've ever seen," a young man said, and then apologized for saying it, considering Elizabeth Alexander's a professor at his alma mater, Yale. "I agree, it was awful," said the older woman standing next to him. A few minutes later, in the cafeteria of the Dirksen Senate Office Building, a young black family—three adorable kids, a beaming mom, a grandma chewing her food contentedly—were all smiles until one of the kids said, "The poem? Was boring." His mom answered, slowly, "It... wasn't... good. It wasn't that good." I've been reading the inaugural poems to date—there have been four—and, as Dwight Garner pointed out last month, none of them have been great. It's possible Alexander's poem has something to it none of us heard, some buried virtue; time will tell.

But Obama's speech was riddled with virtues—it took no time to figure that out. It was a bright, cold morning, made brighter by the clusters of the whitest lights I've ever seen, whiter than the light of the sun, flanking the stage, and the cutest clouds walking by overhead, but the president, channeling the mood of the famous gloombot Abraham Lincoln, began and ended with stormy words: "Every so often the oath is taken amidst gathering clouds and raging storms," he said at the very outset, and in the closing sentences he said, "With hope and virtue, let us brave once more the icy currents, and endure what storms may come." He is doing there what poets, namely the Romantic poets, used to do better than anyone—expressing the emotional/psychological plane of reality in terms of weather, pastoral phenomena, landscape.

Between the storms was a speech that pretty fairly matched what Obama told reporters he was going to try to do, which was to "capture as best I can the moment we are in." As Jonathan Raban pointed out not too long ago in the Wall Street Journal, you don't need big words, or a lot of words, to mark a big moment: the Gettysburg Address, in a mere 270 words, "redefined the purpose and meaning of the nation."

There were flashes of Romanticist, Lincolnesque, cyber-pastoral beauty:

We will build the roads and bridges, the electric grids and digital lines that feed our commerce and bind us together. We will restore science to its rightful place, and wield technology's wonders to raise health care's quality and lower its cost. We will harness the sun and the winds and the soil to fuel our cars and run our factories.

(Lincoln's second inaugural address addressed the need to "finish the work we are in, to bind up the nation's wounds...")

There was the simplest, most convincing denunciation of terrorism an American president has yet to utter:

To those leaders around the globe who seek to sow conflict, or blame their society's ills on the West — know that your people will judge you on what you can build, not what you destroy.

There were several obvious slaps at Bush stated so eloquently, so politely, I doubt Bush even registered them, including an insistence that this new administration would "do our business in the light of day" and that Bush/Cheney's these-are-enemies-who-are-scarier-than-anything-ever is shortsighted, ahistorical, and cowardly, and completely misses the point that we can—yes! we! can!—inspire by example:

As for our common defense, we reject as false the choice between our safety and our ideals. Our founding fathers, faced with perils we can scarcely imagine, drafted a charter to assure the rule of law and the rights of man, a charter expanded by the blood of generations. Those ideals still light the world, and we will not give them up for expedience's sake. And so to all other peoples and governments who are watching today, from the grandest capitals to the small village where my father was born: know that America is a friend of each nation and every man, woman, and child who seeks a future of peace and dignity, and that we are ready to lead once more.

That was, alas, followed up with some Bush-speak ("you cannot outlast us, and we will defeat you") which was disheartening, but Obama will find his we're-going-to-blast-you-into-smithereens vocabulary soon enough.

Because we have tasted the bitter swill of civil war and segregation, and emerged from that dark chapter stronger and more united, we cannot help but believe that the old hatreds shall someday pass; that the lines of tribe shall soon dissolve; that as the world grows smaller, our common humanity shall reveal itself.

That's fucking beautiful. As is Obama's closing, in which he reached further back, further than Lincoln, to the man whose monument presided over the day:

In the year of America's birth, in the coldest of months, a small band of patriots huddled by dying campfires on the shores of an icy river. The capital was abandoned. The enemy was advancing. The snow was stained with blood. At a moment when the outcome of our revolution was most in doubt, the father of our nation ordered these words be read to the people:

"Let it be told to the future world ... that in the depth of winter, when nothing but hope and virtue could survive...that the city and the country, alarmed at one common danger, came forth to meet (it)."

America, in the face of our common dangers, in this winter of our hardship, let us remember these timeless words. With hope and virtue, let us brave once more the icy currents, and endure what storms may come. Let it be said by our children's children that when we were tested we refused to let this journey end, that we did not turn back nor did we falter; and with eyes fixed on the horizon and God's grace upon us, we carried forth that great gift of freedom and delivered it safely to future generations.