I almost hate to post this as some commenters will surely seize the opportunity to kick the shit out of Mike Jones one more time, but Jones asked me to help spread the word about his listing at eBay: 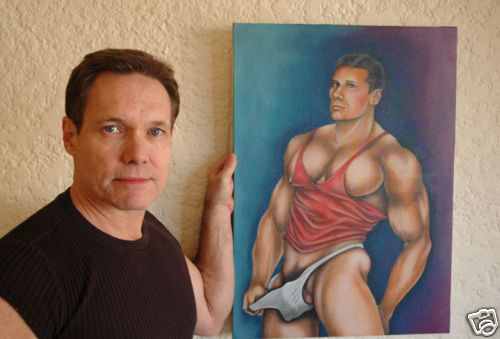 My name is Mike Jones of the Ted Haggard saga. I have come to a point where I have to part with one of my most cherished possessions. A portrait of myself that I was hoping to keep as a reminder as I reach my golden years in my life, to remind me of what I used to look like. But because of personal circumstances with the changes in my life, I must part with this.

He's asking $500 for the painting, and he'll toss in a signed copy of his book.

Jones, of course, is the male escort who outed evangelist Ted Haggard. I'm not sure what could or should be done for Jones. He was on the verge of aging out of his profession before he outed Haggard, but by going public with his story—which was absolutely the right thing to do—Jones made himself virtually unemployable. And while Haggard is currently being paid by HBO to work the contrition circuit—Larry King, Oprah, a million print interviews—Jones sits in Denver, unemployed and suffering both emotionally and financially. Haggard says he's thankful that Jones came forward, and that he's sorry for the pain he's caused him. Maybe Ted could use some of HBO's money to buy the painting. It would be a nice gesture and Ted would get a little keepsake out of it.