The Sexual Evolution of Pepe LePew 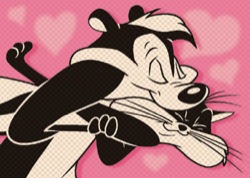 As anyone who grew up watching Warner Brothers cartoons can tell you, Pepe LePew is a cartoon skunk who taught the whole world about the hilarity of not taking no for an answer.

Here's how it typically worked in Pepe LePew's world: An unlucky female cat—always black, for reasons that will soon become clear—is forced the squeeze underneath a freshly-painted white picket fence, which leaves a nice big white stripe down her back, making her appear exactly like a lady skunk.

Then, last night, I saw this commercial, in which Pepe LePew and his cat-skunk girlfriend shill for AT&T:

You'll notice that the lady cat is now happily applying her own paint stripe, to secure the affections of Mr. Pepe, for whom she is now overwhelmed with horniness.

Is this a politically correct revision of the earlier "What part of non don't you understand?" skunk-on-cat courtship? Or is it an extension of that courtship, and we're to believe Pepe's tireless sexual assaults finally wore the poor cat down, and what looks like love is simply Stockholm Syndrome? Or is this like that amazing scene in Gone with the Wind, when Scarlett wakes up the morning after her spousal rape with a smile on her face and a song in her heart?