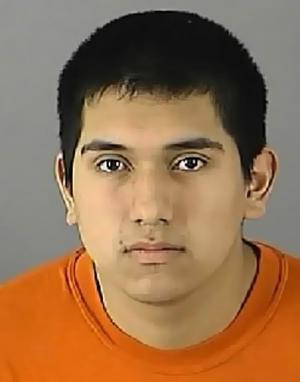 The lead story in the New York Times's national section today is about an 18-year-old high school student in Wisconsin named Anthony Stancl who allegedly set up fake profiles on Facebook—pretending he was a teenage girl—"to dupe 31 male classmates, some as young as 15, into sending him nude photographs of themselves over the last several months." Once he had photos of his classmates in the buff, "he threatened to release the photos to the victims’ friends or even all of Eisenhower [High School]’s 850 students if the youths who had sent them to him did not agree to perform sexual acts he demanded. The tactic was successful, officials said. Mr. Stancl is accused of using it to sexually assault seven boys."

Now, lying is wrong, and blackmail is wrong, and sexual assault on a minor is wrong—this kid clearly deserves to get in trouble—but doing this up as a sexual-predator-ravages-a-Wisconsin-town type story (the NYT's headline is "Sex Predator Accusations Shake a Wisconsin Town") seems slightly off. Consider the mitigating factors. First of all, teenagers lie to one another all the time. Second, these teenage guys (the victims) took photos/videos of their ding-dongs and sent them to a person on the internet—a person they'd never met (considering she didn't exist)—of their own volition. Third, gay kids in high school are the victims of humiliating pranks constantly, as well as the low-level humiliation of being "other," which is particularly pronounced if you don't grow up in a diverse, urban setting—if instead you grow up in a generic, picture-perfect, sports-loving, old-fashioned town made up of houses with triple-car garages and basketball hoops in every driveway and an oppressive sense of what's "normal" (i.e., not you) bearing down on you. According to the story, Stancl thought of what he was doing as a prank—"a fun-filled prank"—and his family lived on a quiet street "in a house with a triple garage and a basketball hoop in the driveway" in a sports-loving, "old-fashioned" town.

The commenters who felt victimized by my post yesterday about the gay-as-the-day-is-long photo editor in charge of high-school-wrestling coverage at Oregon's Mail Tribune will surely rush to the defense of the deceived jocks who sent naked photos of themselves to someone they didn't mean to, or point out that this is just one more piece of evidence that all gay people are predatory and are trying to recruit straights to their evil ways, but I can't help shaking the feeling that the "sexual predator" descriptor, at least based on what we know, is a little overblown. The guy wasn't a Catholic priest entrusted with the care of these minors, or a Fox News producer allegedly preying on the misery of five-year-olds. He was, like, the faggot in math class, the guy they probably made constant fun of, a guy who e-mailed a bomb threat to the high school in November (for unexplained reasons, though we know from Columbine what those reasons tend to be).

And while he's 18 and some of them are younger than him, they're all in high school together—so the "sexual assault on children and possession of child pornography" charge seems disingenuous. The photos/videos never saw the light of day (Stancl apparently kept them all on his computer, in "39 electronic folders, each bearing the name of a single student at Eisenhower"—what a freak!), sparing the guys who'd been duped the embarrassment of everyone seeing them naked while teaching them a valuable lesson: don't send photos/videos of your naked self to people you don't know on the internet, unless you want people you've never met to see them. The blackmail is the truly twisted part of the story, the part that, if the allegations are borne out, deserves serious reprimand; but the story has no information about what the "sexual acts" he made the seven guys "perform" were, nor any information about why those blackmail victims didn't just call the cops. The "sexual acts" he was going for might be less horrible than your imagination assumes. According to this article, more than half of the 31 victims "said the girl with whom they thought they were communicating tried to get them to meet with a male friend to let him perform sex acts on them," and seven of them agreed to it. In the absence of more information, it sounds like (this is a guess) he got the guys to let him give them blow jobs, in some cases repeatedly. You begin to wonder how non-consensual those blow jobs were (if they were blow jobs), especially because none of those seven victims ever complained to authorities. The cops only found out about all this when they were searching Stancl's computer for some other reason—that bomb threat.

Clearly, the kid has issues and should be prosecuted. But did any other gay guys who grew up in quiet, sports-loving, old-fashioned, three-car-garage heavy towns read the story and secretly, privately, give the kid props for managing to embarrass the straight jocks for once? He's twisted, surely, but he's also kind of a genius, no?

That image above is Waukesha County Sheriff's Department's photo of Anthony R. Stancl.

UPDATE: Um, I take it back.