Remember the poll-watchers at FiveThirtyEight.com? After following the presidential election—the number stands for the 538 electoral votes that were up for grabs—they're lending their skills to less pressing matters: like what people think about marijuana.

In a meta-analysis of three recent polls, FiveThirtyEight finds that Americans are increasingly friendly to legalizing pot. Here's a butt-plug-resembling graph that shows where Americans have stood on the issue over the last few decades: 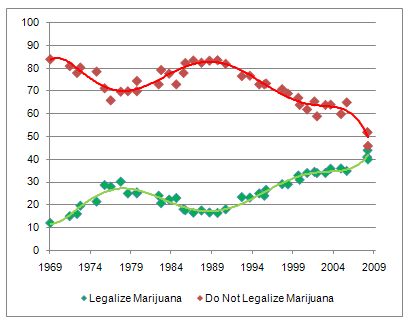 We want to legalize pot more than ever. But FiveThirtyEight offers a couple caveats:

Agreed. The majority of Americans are far from chanting for legalization, but, realistically, that's the wrong question—should we leeeeeegalize marijuana?—to ask. I've spoken to lots of middle-of-the-road folks who think arresting people for smoking pot is wasteful and wrong, but they oppose legalizing marijuana "because it's illegal" (which is the sort of circular logic that makes you wonder if humans are devolving as species). But I understand where they're coming from. Drugs are harshly prohibited, so the idea of just legalizing pot all willy nilly is pretty terrifying to a lot of parents. All these questions arise: Would pot be sold next to Snickers bars in the candy store, handed out with milk in the lunch line, placed like prizes in the bottom of Cracker Jacks boxes? Jesus, no legalization for me, thanks.

More realistically, the most lax rules for pot would be similar to alcohol: standards for quality and potency, mechanisms for licensing dealers, and minimum age requirements for consumers, etc. But—seriously—we are not about to drop the entire war on pot and start taxing it overnight. So the fact that only a minority of people say they "want to legalize pot" right now is a moot point.

The question for people is whether they would support decriminalizing marijuana. This is a locally attainable, easily implemented policy that makes penalties less harsh but keeps pot against the rules. It's still bad, mkay? Police can take the stash, give folks a ticket, etc. Just last November, Massachusetts decriminalized pot—the penalty for possessing an ounce is now only a $100 fine—with 65 percent of the electorate voting for it. Pot smokers aren't going to the slammer, kids aren't smoking dope in the lunch line; no legalization required. So the question that would better elicit where America stands on illicit pot is this: Would you support decriminalizing marijuana for adult personal use, so that police could not arrest people for possessing it but instead issue them a fine like a parking ticket?