Pissed Off About the Recent Gay Bashings?

Originally posted Thursday and moved up for tonight's event.

This weekend, the Queer Ally Coalition is planning a vigil and candlelight procession through the streets of Capitol Hill to draw attention to an upsurge of anti-gay violence in Seattle. Two men attacked Jerry Knight last weekend, and a man attacked Jay Lewis earlier this month—in both cases the assailants yelled “faggot” before beating the victims. Nationally, the FBI reported in October that anti-gay bias crimes had increased by six percent. 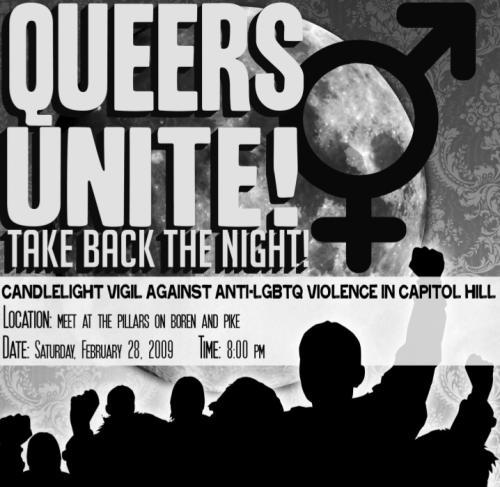 “We are trying to send a strong message to these bigots that we are not going to stand for these sort of attacks,” says Chanan Suarezdiaz, one of the Queer Ally Coalition organizers. He thinks the passage of Prop 8 may have emboldened homophobic attackers. “These bigots feel they can terrorize queers and get away with it because were just stripped of marriage rights,” he says.

Vigils may seem a wimpy tactic to counter violence. Some folks believe that, rather than lighting candles, the gays need to go out and kick some ass. Defending the streets is a need going unmet. But a candlelight march is a good start at increasing visibility. The presence of the gay-safety squad Q-Patrol (who also was not afraid to kick some ass, if needed) years ago was credited with instilling a sense of protection and helping deter hate crimes on Capitol Hill. The group dissolved years ago, in part, because gay bashings had grown rare—probably because Q-Patrol scared off some of the fuckers. Now there’s growing sentiment that Q-Patrol, or a group like it, should return to the streets. If you're of the mind that gays must physically defend the hill, then attending this vigil is more important than ever: The demand for a new group will be gauged partly by the turnout Saturday. Think you want to be involved in a street-patrol group? Meet like-minded folks at the protest.

The event begins at 8:00 p.m. on Saturday, February 28 by the pillars on Boren Avenue and Pike Street. Speakers will include victims of anti-gay violence on Capitol Hill and representatives from the Seattle Commission for Sexual Minorities. The Facebook page is here.