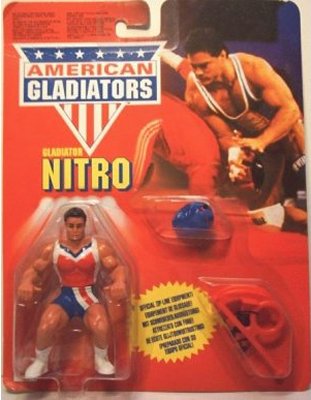 There's a lot going on today.

At Elliott Bay Book Company, Meg Wolitzer reads from The Ten-Year Nap, a novel about breastfeeding, gyms, and jealousy. Wolitzer's not just a generic chick-lit writer, though her books are packaged as such. Then a little later at Elliott Bay, David C. Korten, author of The Agenda for a New Economy: From Phantom Wealth to Real Wealth, discusses what the new economy will look like. (Hint: It will be different from the old economy.)

At the Fantagraphics Store in Georgetown, Dame Darcy, who is a fabulous cartoonist, will perform some sort of music and sign copies of her new comic, Gasoline. You can learn more about Dame Darcy here. And here is one of Dame Darcy's genius appearances on Blind Date:

For that alone, this has to be the reading of the night.

But I know others of you are excited about this one: Dan Clark, who is better known as Nitro (the American Gladiator), reads from his biography, Gladiator, at Third Place Books. He reveals that he was on steroids in the book. Pick your jaw back up from the floor. If you watched a lot of American Gladiators, this is probably your reading of the night. Enjoy!

The full readings calendar, including the next week or so, is here.