How Did the Seattle Times Become a Local Media Villain? 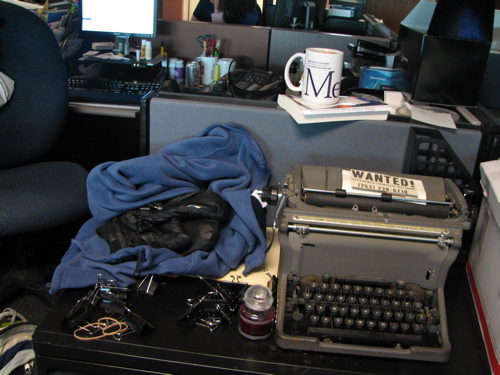 As Seattle's oldest newspaper gets tossed into its last recycle bins, it's worth asking: How did Seattle's other, younger newspaper, The Seattle Times—which at 112 years old isn't really that much younger—become the bad guy?

Because it's hard to ignore the fact that, amid the long death throes of the Seattle Post-Intelligencer, a perception has somehow solidified that the P-I was the city's kooky, radical granny who unfortunately died too soon, while the Times is Seattle's rigid, angry, conservative grandad who many people quietly—and some people not so quietly—wish had died instead.

The negative sentiment regarding the Times isn't unique to our comment threads. The paper's reporters and boosters feel it in the world at large, and have been privately complaining of late that the Times is getting a bad rap. How, they wonder, has the newspaper owned by Hearst (meaning, the newspaper owned by a giant, suit-run, New-York-based corporation) become a martyr dying on the cross of local journalism while everyone in town prostrates themselves before the eternal beauty of its inherent goodness? How is it that Hearst strings a bunch of local reporters along for more than two months, keeping them in agonizing suspense about something as simple as their last day of work, then ultimately breaks the P-I employees' union in order to form a smaller, union-less online entity—and yet Frank Blethen, whose family owns the Times, is somehow still the city's worst employer and most notorious union-buster? How is the product run by a national conglomerate the underdog and the product run by an area family the establishment? How is it that in buy-local Seattle, the locally-owned paper is, in certain quarters, the subject of something akin to organ rejection at the same moment that the city is about to lose a vital civic organ?

Here's a representative (and not isolated) e-mail from a Times employee who has been wondering these very things, and is miffed that the P-I is currently leveraging its moment in the sympathetic spotlight to snag contributors like Congressman Jim McDermott for its online-only incarnation:

So how do supposed liberals like McDermott and etc. justify contributing to a "paper" that just shitcanned the union and hired back people at substandard wages and benefits? I am surprised no one has brought that up in this supposedly Union town.

The most basic way to answer this question is that, while journalists and politicos tend to understand who owns the city's media outlets, as well as the relevant details of those owners' beliefs and business practices, the average person really doesn't understand such things. What the average person probably knows is that the P-I has been around longer, has a liberal editorial page that is far more in synch with the Seattle ethos, and is so much a part of the city's fabric that Seattle's very skyline would be incomplete without the paper's iconic neon globe. While, on the other hand, the average person probably knows that the Times endorsed George W. Bush in 2000 and Dino Rossi in 2004 and 2008, has nothing close to a landmark presence in the cityscape, and is owned by a guy who once shot his neighbor's dog with a pellet gun. (Which is not even to get into the critique of more informed media observers who describe the Times as the more suburban, sluggish, and aloof of the two papers.)

Because of all this, the Times starts off with two strikes against it in the general consciousness. Its conservative editorial page makes it an outsider, as does the character (or, perhaps, caricature) of its owners. That's a hard hole to climb out of by trying to argue, as the Times and its supporters do, that whatever the politics of the paper's opinion-mongers, and whatever the eccentricities of its ruling family, it puts out a far superior news product.

More relevant to the moment at hand: Once the P-I is gone, the Times won't even be able to make the "superior product" argument. The two products are about to become so different that the old side-by-side style of comparison won't apply, with one a bloggy aggregator relying on a small news staff that is vowing to break a lot of old journalistic rules, and the other a slimmed-down behemoth still trying to straddle both the print and online realms while relying on more traditional journalistic notions.

In a way, there's an opportunity here for the Times. Right now, whatever the merits of the sentiment, the Seattle Times—the SEATTLE Times—is not seen by enough people as a true voice of this city. It wouldn't take much, though, to start turning that around. And, somewhat ironically, if they're looking for cues on what direction to take, the people who steer the voice and reputation of the Times could start by leafing through the recent archives of the paper that today just printed its last edition. 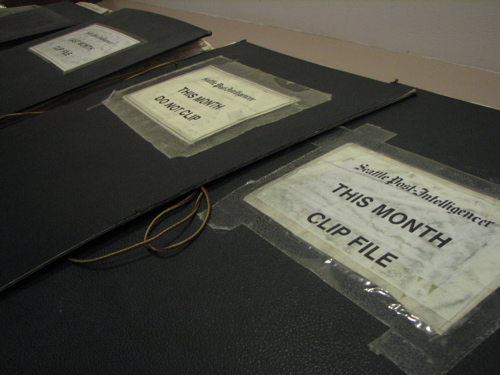 Photos from inside the Seattle Post-Intelligencer newsroom by Eli Sanders.