New in Restaurants: For Sale

Wanna buy a restaurant? You're in luck—places are for sale all over town (maybe even your favorite place). A sampling from Craigslist:

• Trattoria Mitchelli (closing down any day now, after approximately one billion years; Stranger reader-reviewers will not miss it by any means)

• Merchant's Cafe (at First and Yesler; this place has THE MOST BEAUTIFUL old-fashioned interior—I have long wished that it would be transformed into something marvelous) 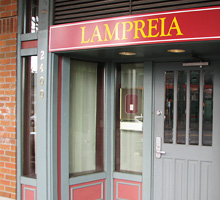 • Lampreia (perhaps Seattle's premiere fine-dining establishment; it is moving, not closing, which is good, because the stuffy, goofy decor needed a major overhaul anyway)

• Saito's Japanese Cafe & Bar (still open serving some of Seattle's best sushi, has been for sale for a while)

• Beato (closed for quite some time)

King Cobra is also for sale. Plus more, more, MORE restaurants—dozens of them, the ones that do not wish to be named—after the jump.